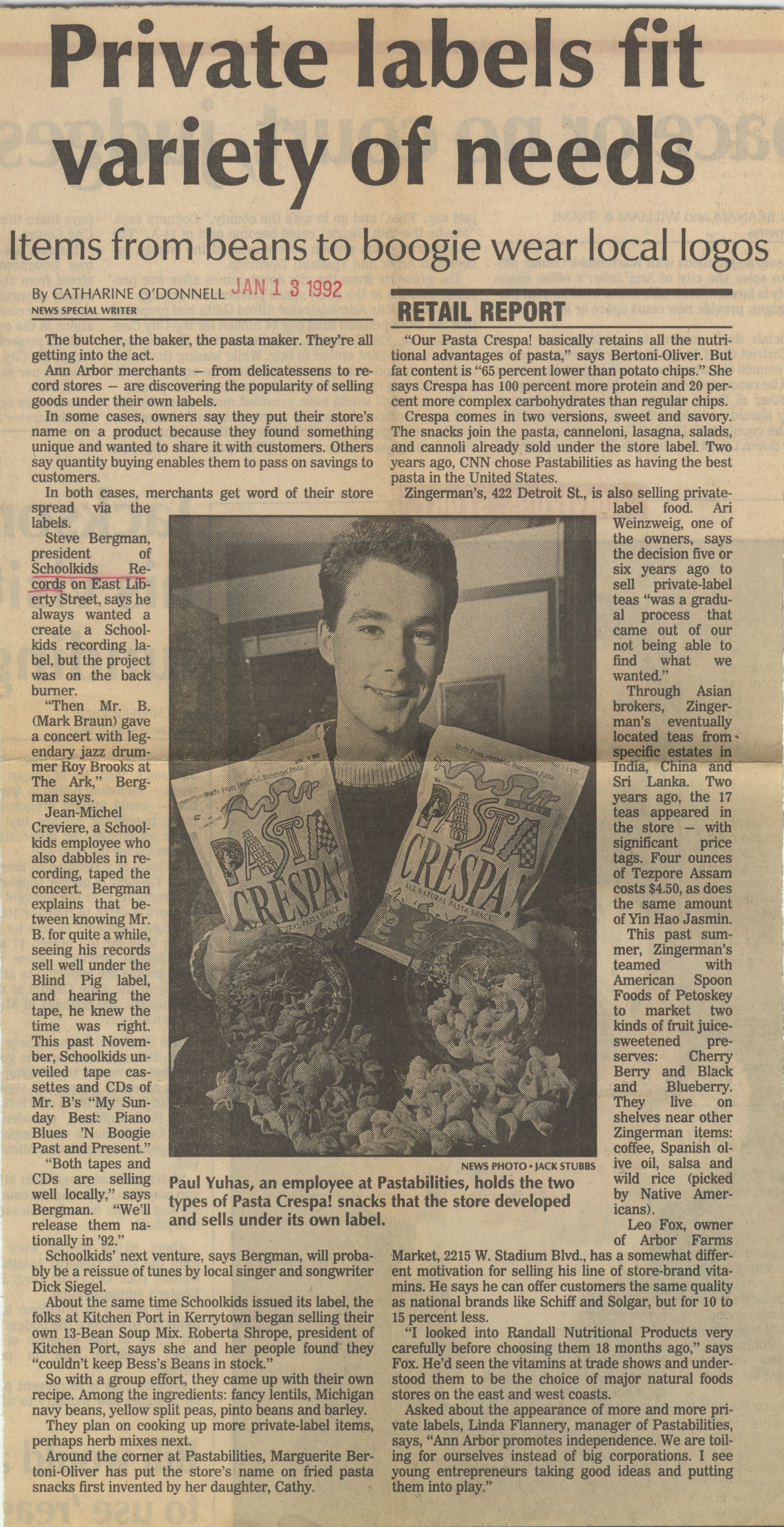 Ann Arbor merchants - from delicatessens to record stores - are discovering the popularity of selling goods under their own labels.

In some cases, owners say they put their store’s name on a product because they found something unique and wanted to share it with customers. Others say quantity buying enables them to pass on savings to customers.

In both cases, merchants get word of their store spread via the labels.

Steve Bergman, president of Schoolkids Records on East Liberty Street, says he always wanted a create a Schoolkids recording label, but the project was on the back burner.

“Then Mr. B. (Mark Braun) gave a concert with legendary jazz drummer Roy Brooks at The Ark,” Bergman says.

Jean-Michel Creviere, a Schoolkids employee who also dabbles in recording, taped the concert. Bergman explains that between knowing Mr. B. for quite a while, seeing his records sell well under the Blind Pig label, and hearing the tape, he knew the time was right. This past November, Schoolkids unveiled tape cassettes and CDs of Mr. B’s “My Sunday Best: Piano Blues ’N Boogie Past and Present.”

“Both tapes and CDs are selling well locally,” says Bergman. “We’ll release them nationally in ’92.”

Schoolkids’ next venture, says Bergman, will probably be a reissue of tunes by local singer and songwriter Dick Siegel.

About the same time Schoolkids issued its label, the folks at Kitchen Port in Kerrytown began selling their own 13-Bean Soup Mix. Roberta Shrope, president of Kitchen Port, says she and her people found they “couldn’t keep Bess’s Beans in stock.”

So with a group effort, they came up with their own recipe. Among the ingredients: fancy lentils, Michigan navy beans, yellow split peas, pinto beans and barley.

They plan on cooking up more private-label items, perhaps herb mixes next.

Around the corner at Pastabilities, Marguerite Ber-toni-Oliver has put the store's name on fried pasta snacks first invented by her daughter, Cathy.

Crespa comes in two versions, sweet and savory. The snacks join the pasta, canneloni, lasagna, salads, and cannoli already sold under the store label. Two years ago, CNN chose Pastabilities as having the best pasta in the United States.

Zingerman’s, 422 Detroit St., is also selling private-label food. Ari Weinzweig, one of the owners, says the decision five or six years ago to sell private-label teas “was a gradual process that came out of our not being able to find what we wanted.”

Through Asian brokers, Zingerman’s eventually located teas from specific estates in India, China and Sri Lanka. Two years ago, the 17 teas appeared in the store - with significant price tags. Four ounces of Tezpore Assam costs $4.50, as does the same amount of Yin Hao Jasmin.

This past summer, Zingerman’s teamed with American Spoon Foods of Petoskey to market two kinds of fruit juice-sweetened preserves: Cherry Berry and Black and Blueberry. They live on shelves near other Zingerman items: coffee, Spanish olive oil, salsa and wild rice (picked by Native Americans).

Leo Fox, owner of Arbor Farms Market, 2215 W. Stadium Blvd., has a somewhat different motivation for selling his line of store-brand vitamins. He says he can offer customers the same quality as national brands like Schiff and Solgar, but for 10 to 15 percent less.

“I looked into Randall Nutritional Products very carefully before choosing them 18 months ago,” says Fox. He’d seen the vitamins at trade shows and understood them to be the choice of major natural foods stores on the east and west coasts.

Asked about the appearance of more and more private labels, Linda Flannery, manager of Pastabilities, says, “Ann Arbor promotes independence. We are toiling for ourselves instead of big corporations. I see young entrepreneurs taking good ideas and putting them into play.”

Paul Yuhas, an employee at Pastabilities, holds the two types of Pasta Crespa! snacks that the store developed and sells under its own label.