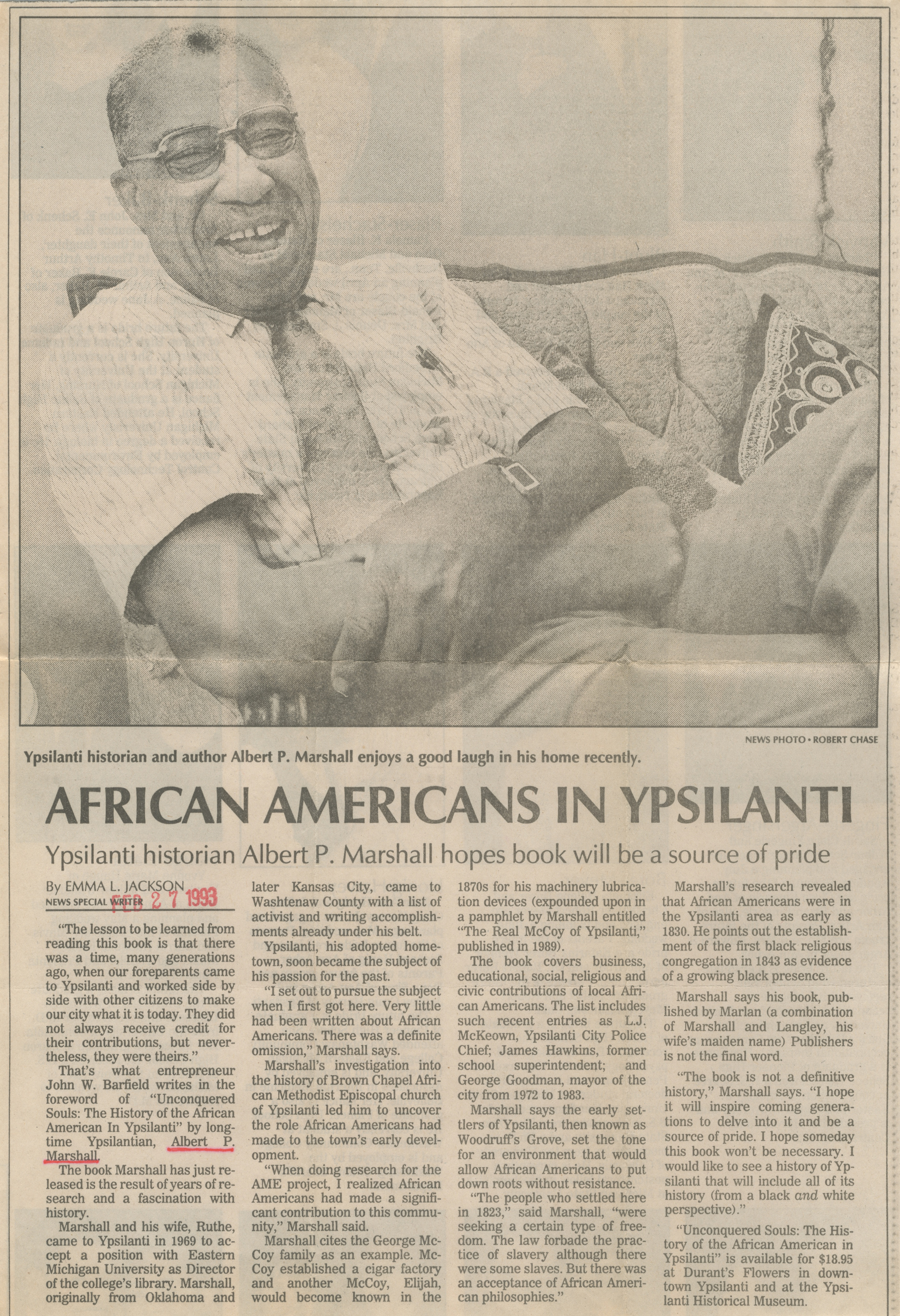 Ypsilanti historian Albert P. Marshall hopes book will be a source of pride.

"The lesson to be learned from reading this book is that there was a time, many generations ago, when our foreparents came to Ypsilanti and worked side by side with other citizens to make our city what it is today. They did not always receive credit for their contributions, but nevertheless, they were theirs."

That's what entrepreneur John W. Barfield writes in the foreword of "Unconquered Souls: the History of the African American in Ypsilanti" by longtime Ypsilantian Albert P. Marshall.

The book Marshall has just released is the result of years of research and a fascination with history.

Marshall and his wife, Ruthe, came to Ypsilanti in 1969 to accept a position with Eastern Michigan University as Director of the college's library. Marshall, originally from Oklahoma and later Kansas City, came to Washtenaw County with a list of activist and writing accomplishments under his belt.

Ypsilanti, his adopted hometown, soon became the subject of his passion for the past.

"I set out to pursue the subject when I first got here. Very little had been written about African Americans. There was a definite omission," Marshall says.

Marshall's investigation into the history of Brown Chapel African Methodist Episcopal Church of Ypsilanti led him to uncover the role African Americans had made to the town's early development.

"When doing research for the AME project, I realized African Americans had made a significant contribution to this community," Marshall said.

Marshall cites the George McCoy family as an example. McCoy established a cigar factory and another McCoy, Elijah, would become known in the 1870s for his machinery lubrication devices (expounded upon in a pamphlet by Marshall entitled "The Real McCoy of Ypsilanti," published in 1989).

Marshall says the early settlers of Ypsilanti, then known as Woodruff's Grove, set the tone for an environment that would allow African Americans to put down roots without resistance.

"The people who settled here in 1823," said Marshall, "were seeking a certain type of freedom. The law forbade the practice of slavery although there were some slaves. But there was an acceptance of African American philosophies."

Marshall's research revealed that African Americans were in the Ypsilanti area as early as 1830. He points out the establishment of the first black religious congregation in 1843 as evidence of a growing black presence.

Marshall says his book, published by Marlan (a combination of Marshall and Langley, his wife's maiden name) Publishers is not the final word.

"The book is not a definitive history." Marshall says. "I hope it will inspire coming generations to delve into it and be a source of pride. I hope someday this book won't be necessary. I would like to see a history of Ypsilanti that will include all of its history (from a black and white perspective)."

"Unconquered Souls: The History of the African American in Ypsilanti" is available for $18.95 at Durant's Flowers in Downtown Ypsilanti and at the Ypsilanti Historical Museum.