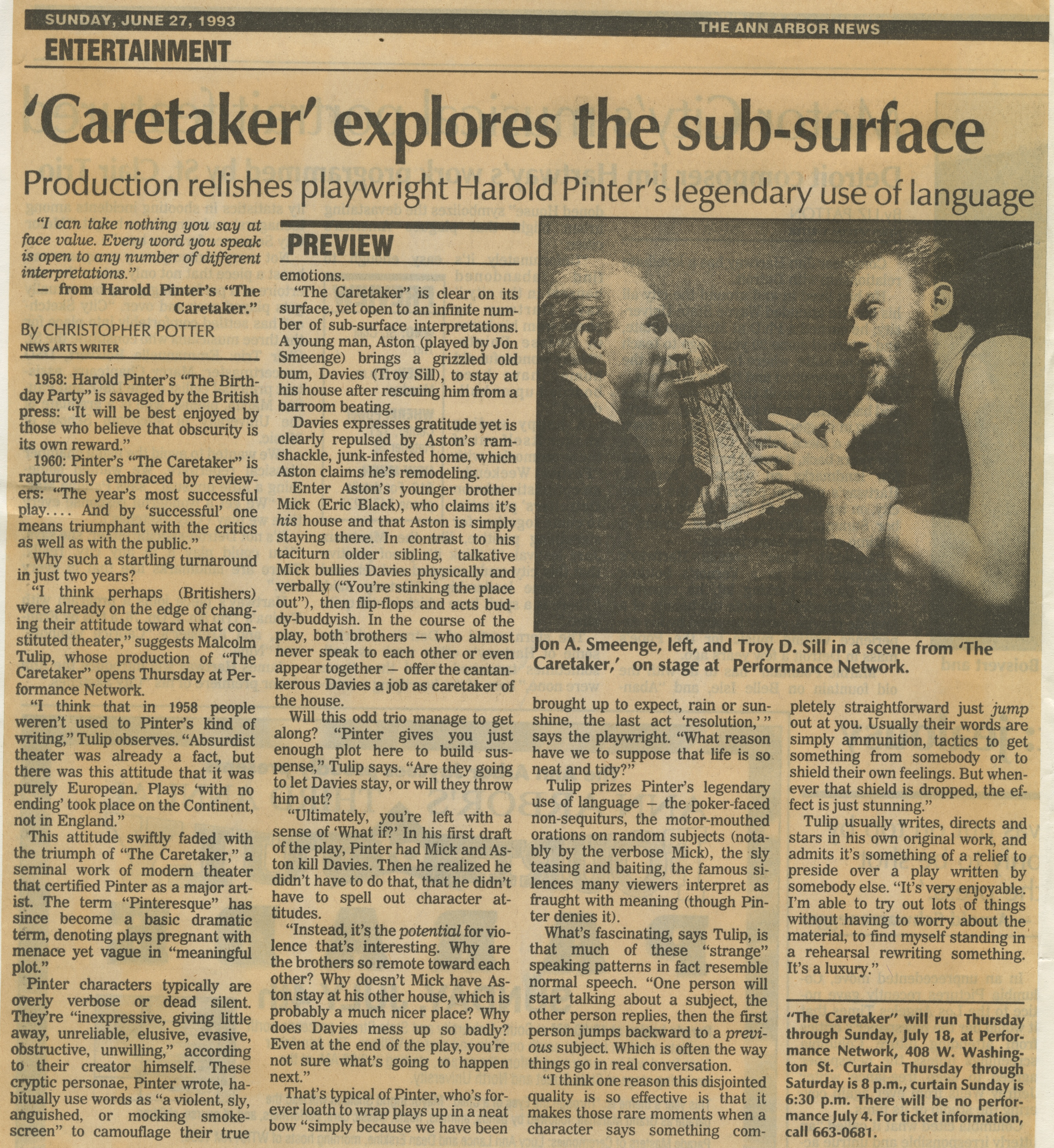 “I can take nothing you say at face value. Every word you speak is open to any number of different interpretations.”
— from Harold Pinter’s “The Caretaker.”

1958: Harold Pinter’s “The Birthday Party” is savaged by the British press: “It will be best enjoyed by those who believe that obscurity is its own reward.”

1960: Pinter’s “The Caretaker” is rapturously embraced by reviewers: “The year’s most successful play.... And by ‘successful’ one means triumphant with the critics as well as with the public.”

Why such a startling turnaround in just two years?

“I think perhaps (Britishers) were already on the edge of changing their attitude toward what constituted theater,” suggests Malcolm Tulip, whose production of “The Caretaker” opens Thursday at Performance Network.

“I think that in 1958 people weren’t used to Pinter’s kind of writing,” Tulip observes. “Absurdist theater was already a fact, but there was this attitude that it was purely European. Plays ‘with no ending’ took place on the Continent, not in England.”

This attitude swiftly faded with the triumph of “The Caretaker,” a seminal work of modem theater that certified Pinter as a major artist. The term “Pinteresque” has since become a basic dramatic term, denoting plays pregnant with menace yet vague in “meaningful plot.”

Pinter characters typically are overly verbose or dead silent. They’re “inexpressive, giving little away, unreliable, elusive, evasive, obstructive, unwilling,” according to their creator himself. These cryptic personae, Pinter wrote, habitually use words as “a violent, sly, anguished, or mocking smokescreen” to camouflage their true emotions.

“The Caretaker” is clear on its surface, yet open to an infinite number of sub-surface interpretations. A young man, Aston (played by Jon Smeenge) brings a grizzled old bum, Davies (Troy Sill), to stay at his house after rescuing him from a barroom beating.

Enter Aston’s younger brother Mick (Eric Black), who claims it’s his house and that Aston is simply staying there. In contrast to his taciturn older sibling, talkative Mick bullies Davies physically and verbally (“You’re stinking the place out”), then flip-flops and acts buddy-buddyish. In the course of the play, both brothers - who almost never speak to each other or even appear together - offer the cantankerous Davies a job as caretaker of the house.

Will this odd trio manage to get along? “Pinter gives you just enough plot here to build suspense,” Tulip says. “Are they going to let Davies stay, or will they throw him out?

“Ultimately, you’re left with a sense of ‘What if?’ In his first draft of the play, Pinter had Mick and Aston kill Davies. Then he realized he didn’t have to do that, that he didn’t have to spell out character attitudes.

“Instead, it’s the potential for violence that’s interesting. Why are the brothers so remote toward each other? Why doesn’t Mick have Aston stay at his other house, which is probably a much nicer place? Why does Davies mess up so badly? Even at the end of the play, you’re not sure what’s going to happen next.”

That’s typical of Pinter, who’s forever loath to wrap plays up in a neat bow “simply because we have been brought up to expect, rain or sunshine, the last act ‘resolution,’” says the playwright. “What reason have we to suppose that life is so neat and tidy?”

Tulip prizes Pinter’s legendary use of language - the poker-faced non-sequiturs, the motor-mouthed orations on random subjects (notably by the verbose Mick), the sly teasing and baiting, the famous silences many viewers interpret as fraught with meaning (though Pinter denies it).

What’s fascinating, says Tulip, is that much of these “strange” speaking patterns in fact resemble normal speech. “One person will start talking about a subject, the other person replies, then the first person jumps backward to a previous subject. Which is often the way things go in real conversation.

“I think one reason this disjointed quality is so effective is that it makes those rare moments when a character says something completely straightforward just jump out at you. Usually their words are simply ammunition, tactics to get something from somebody or to shield their own feelings. But whenever that shield is dropped, the effect is just stunning.”

Tulip usually writes, directs and stars in his own original work, and admits it’s something of a relief to preside over a play written by somebody else. “It’s very enjoyable. I’m able to try out lots of things without having to worry about the material, to find myself standing in a rehearsal rewriting something. It’s a luxury.”

Jon A. Smeenge, left, and Troy D. Sill in a scene from 'The Caretaker/ on stage at Performance Network.