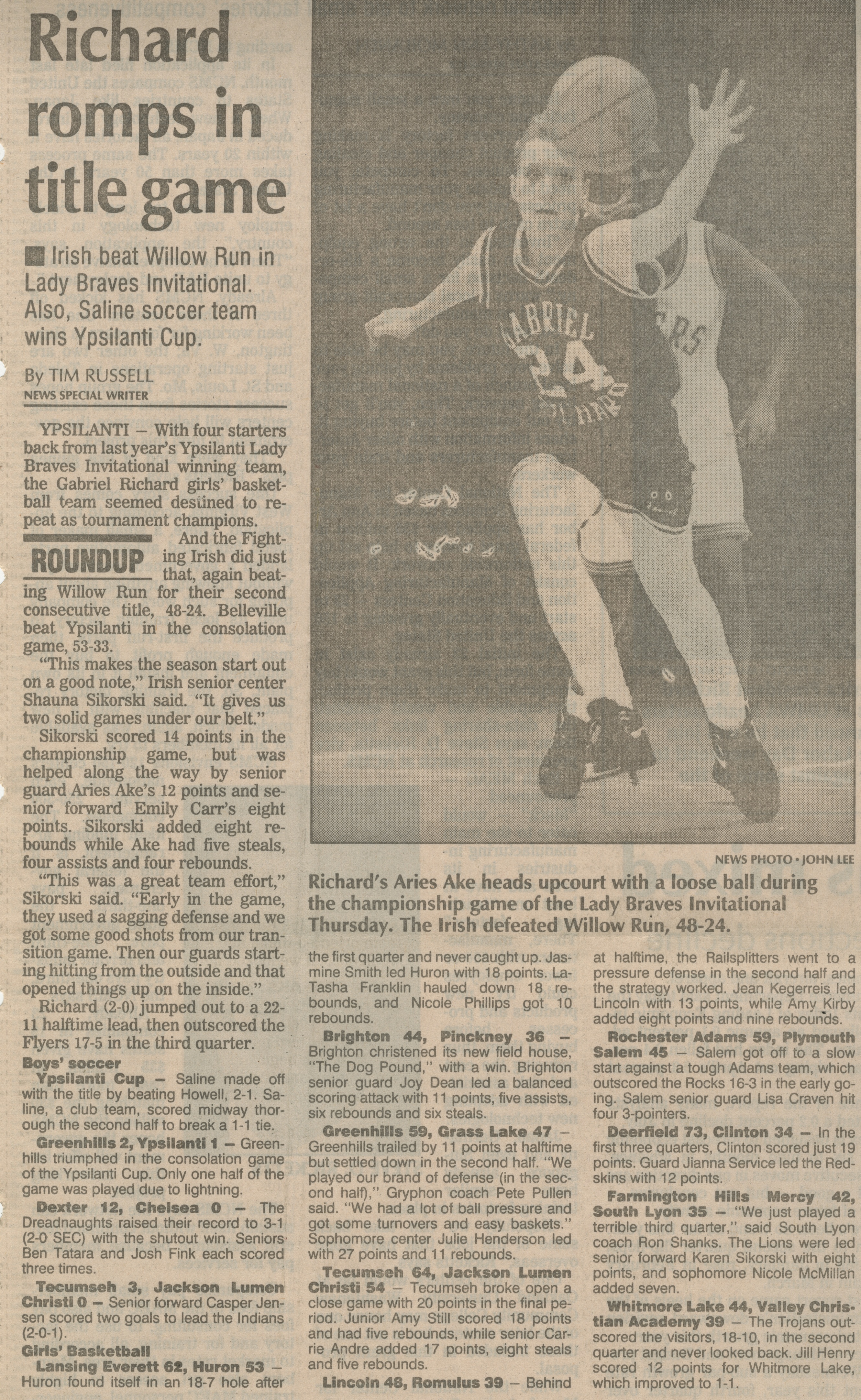 And the Fighting Irish did just that, again beating Willow Run for their second consecutive title, 48-24. Belleville beat Ypsilanti in the consolation game, 53-33.

“This makes the season start out on a good note,” Irish senior center Shauna Sikorski said. “It gives us two solid games under our belt.” Sikorski scored 14 points in the championship game, but was helped along the way by senior guard Aries Ake’s 12 points and senior forward Emily Carr’s eight points. Sikorski added eight rebounds while Ake had five steals, four assists and four rebounds.

“This was a great team effort,” Sikorski said. “Early in the game, they used a sagging defense and we got some good shots from our transition game. Then our guards starting hitting from the outside and that opened things up on the inside.” Richard (2-0) jumped out to a 22-11 halftime lead, then outscored the Flyers 17-5 in the third quarter.

Ypsilanti Cup — Saline made off with the title by beating Howell, 2-1. Saline, a club team, scored midway thorough the second half to break a 1 -1 tie.

Greenhills 2, Ypsilanti 1 - Greenhills triumphed in the consolation game of the Ypsilanti Cup. Only one half of the game was played due to lightning.

Dexter 12, Chelsea 0 - The Dreadnaughts raised their record to 3-1 (2-0 SEC) with the shutout win. Seniors Ben Tatara and Josh Fink each scored three times.

Lansing Everett 62, Huron 53 - Huron found itself in an 18-7 hole after
the first quarter and never caught up. Jasmine Smith led Huron with 18 points. LaTasha Franklin hauled down 18 rebounds, and Nicole Phillips got 10 rebounds.

Greenhills 59, Grass Lake 47 - Greenhills trailed by 11 points at halftime but settled down in the second half. "We played our brand of defense (in the second half),” Gryphon coach Pete Pullen said. "We had a lot of ball pressure and got some turnovers and easy baskets." Sophomore center Julie Henderson led with 27 points and 11 rebounds.

Lincoln 46, Romulus 39 - Behind at halftime, the Railsplitters went to a pressure defense in the second half and the strategy worked. Jean Kegerreis led Lincoln with 13 points, while Amy Kirby added eight points and nine rebounds.

Rochester Adams 59, Plymouth Salem 45 - Salem got off to a slow start against a tough Adams team, which outscored the Rocks 16-3 in the early going. Salem senior guard Lisa Craven hit four 3-pointers.

Whitmore Lake 44, Valley Christian Academy 39 - The Trojans out-scored the visitors, 18-10, in the second quarter and never looked back. Jill Henry scored 12 points for Whitmore Lake, which improved to 1-1.