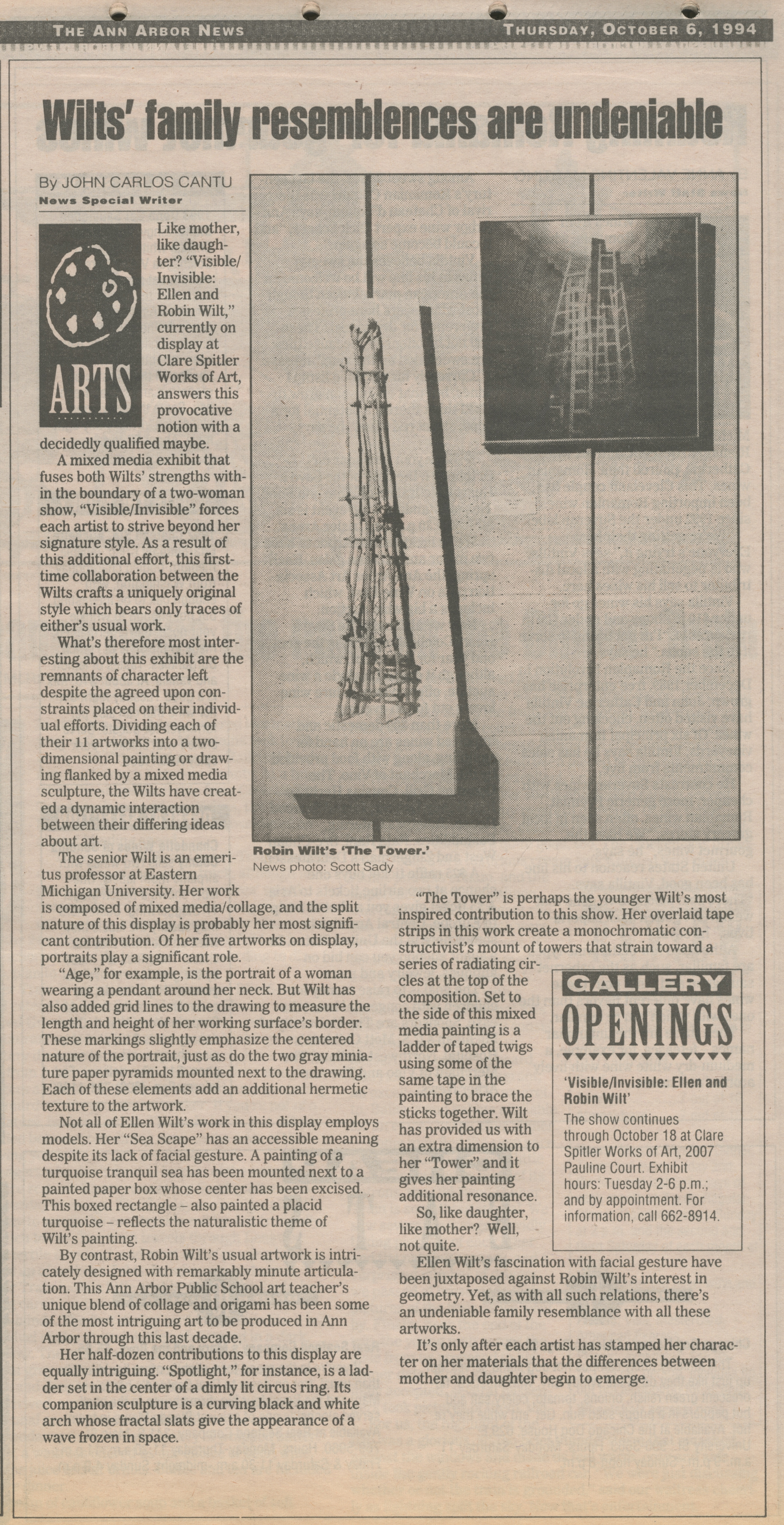 Like mother, like daughter? “Visible/Invisible: Ellen and Robin Wilt,” currently on display at Clare Spitler Works of Art, answers this provocative notion with a decidedly qualified maybe.

A mixed media exhibit that fuses both Wilts’ strengths within the boundary of a two-woman show, “Visible/Invisible” forces each artist to strive beyond her signature style. As a result of this additional effort, this first-time collaboration between the Wilts crafts a uniquely original style which bears only traces of either’s usual work.

What’s therefore most interesting about this exhibit are the remnants of character left despite the agreed upon constraints placed on their individual efforts. Dividing each of their 11 artworks into a two-dimensional painting or drawing flanked by a mixed media sculpture, the Wilts have created a dynamic interaction between their differing ideas about art.

The senior Wilt is an emeritus professor at Eastern Michigan University. Her work is composed of mixed media/collage, and the split nature of this display is probably her most significant contribution. Of her five artworks on display, portraits play a significant role.

“Age,” for example, is the portrait of a woman wearing a pendant around her neck. But Wilt has also added grid lines to the drawing to measure the length and height of her working surface’s border. These markings slightly emphasize the centered nature of the portrait, just as do the two gray miniature paper pyramids mounted next to the drawing. Each of these elements add an additional hermetic texture to the artwork.

Not all of Ellen Wilt’s work in this display employs models. Her “Sea Scape” has an accessible meaning despite its lack of facial gesture. A painting of a turquoise tranquil sea has been mounted next to a painted paper box whose center has been excised. This boxed rectangle - also painted a placid turquoise - reflects the naturalistic theme of Wilt’s painting.

By contrast, Robin Wilt’s usual artwork is intricately designed with remarkably minute articulation. This Ann Arbor Public School art teacher’s unique blend of collage and origami has been some of the most intriguing art to be produced in Ann Arbor through this last decade.

Her half-dozen contributions to this display are equally intriguing. “Spotlight,” for instance, is a ladder set in the center of a dimly lit circus ring. Its companion sculpture is a curving black and white arch whose fractal slats give the appearance of a wave frozen in space.

“The Tower” is perhaps the younger Wilt’s most inspired contribution to this show. Her overlaid tape strips in this work create a monochromatic constructivist’s mount of towers that strain toward a series of radiating circles at the top of the composition. Set to the side of this mixed media painting is a ladder of taped twigs using some of the same tape in the painting to brace the sticks together. Wilt has provided us with an extra dimension to her “Tower” and it gives her painting additional resonance.

Ellen Wilt’s fascination with facial gesture have been juxtaposed against Robin Wilt’s interest in geometry. Yet, as with all such relations, there’s an undeniable family resemblance with all these artworks.

It’s only after each artist has stamped her character on her materials that the differences between mother and daughter begin to emerge.