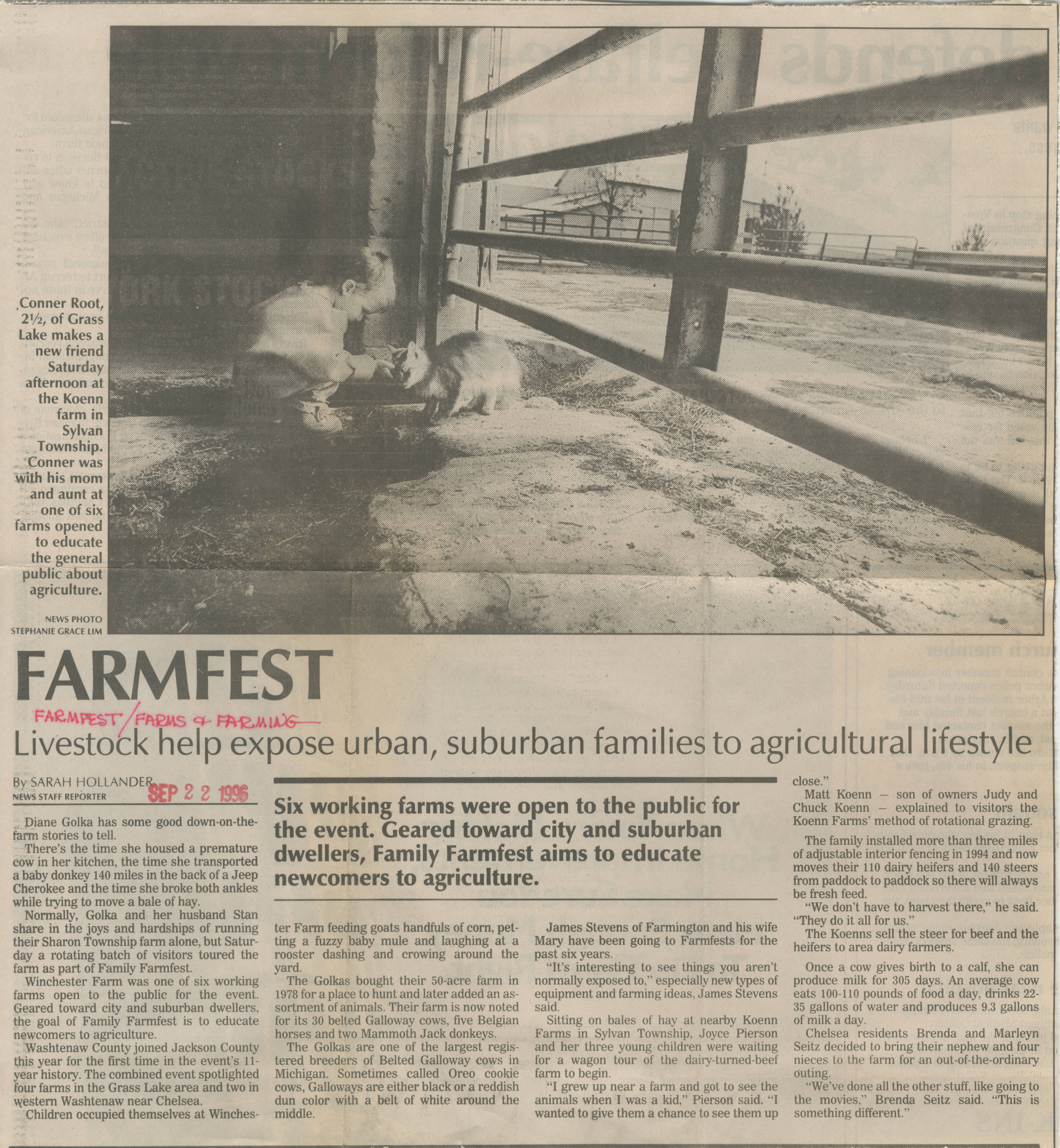 ﻿.Conner Root, 21/2, of Grass Lake makes a new friend Saturday afternoon at the Koenn farm in Sylvan Township. Conner was with his mom and aunt at one of six farms opened to educate the general public about agriculture.

Six working farms were open to the public for the event. Geared toward city and suburban dwellers, Family Farmfest aims to educate newcomers to agriculture.

Diane Golka has some good down-on-the-farm stories to tell.

There’s the time she housed a premature cow in her kitchen, the time she transported a baby donkey 140 miles in the back of a Jeep Cherokee and the time she broke both ankles while trying to move a bale of hay.

Normally, Golka and her husband Stan share in the joys and hardships of running their Sharon Township farm alone, but Saturday a rotating batch of visitors toured the farm as part of Family Farmfest.

Winchester Farm was one of six working farms open to the public for the event. Geared toward city and suburban dwellers, the goal of Family Farmfest is to educate newcomers to agriculture.

Washtenaw County joined Jackson County this year for the first time in the event’s 11-year history. The combined event spotlighted four farms in the Grass Lake area and two in westem Washtenaw near Chelsea.

Children occupied themselves at Winchester Farm feeding goats handfuls of corn, petting a fuzzy baby mule and laughing at a rooster dashing and crowing around the yard.

The Golkas bought their 50-acre farm in 1978 for a place to hunt and later added an assortment of animals. Their farm is now noted for its 30 belted Galloway cows, five Belgian horses and two Mammoth Jack donkeys.

The Golkas are one of the largest registered breeders of Belted Galloway cows in Michigan. Sometimes called Oreo cookie cows, Galloways are either black or a reddish dun color with a belt of white around the middle.

James Stevens of Farmington and his wife Maiy have been going to Farmfests for the past six years.

Sitting on bales of hay at nearby Koenn Farms in Sylvan Township, Joyce Pierson and her three young children were waiting for a wagon tour of the dairy-turned-beef farm to begin.

“I grew up near a farm and got to see the animals when I was a kid,” Pierson said. “I wanted to give them a chance to see them up close.”

The family installed more than three miles of adjustable interior fencing in 1994 and now moves their 110 dairy heifers and 140 steers from paddock to paddock so there will always be fresh feed.

The Koenns sell the steer for beef and the heifers to area dairy farmers.

Chelsea residents Brenda and Marleyn Seitz decided to bring their nephew and four nieces to the farm for an out-of-the-ordinary outing.

“We’ve done all the other stuff, like going to the movies,” Brenda Seitz said. “This is something different.”