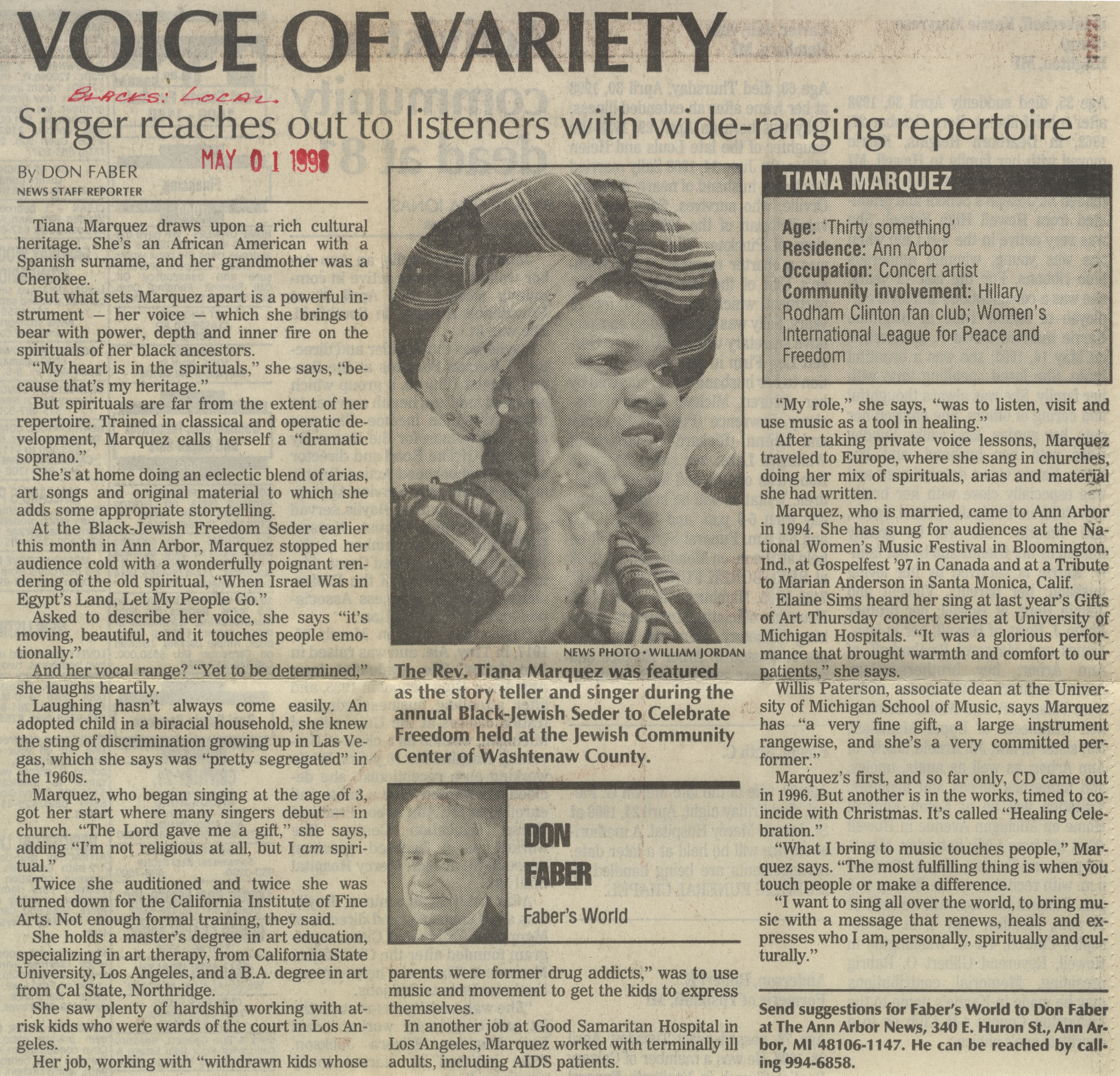 Singer reaches out to listeners with wide-ranging repertoire

Tiana Marquez draws upon a rich cultural heritage. She’s an African American with a Spanish surname, and her grandmother was a Cherokee.

But what sets Marquez apart is a powerful instrument - her voice - which she brings to bear with power, depth and inner fire on the spirituals of her black ancestors.

"My heart is in the spirituals,” she says, “because that’s my heritage.”

But spirituals are far from the extent of her repertoire. Trained in classical and operatic development, Marquez calls herself a “dramatic soprano.”

She’s at home doing an eclectic blend of arias, art songs and original material to which she adds some appropriate storytelling.

At the Black-Jewish Freedom Seder earlier this month in Ann Arbor, Marquez stopped her audience cold with a wonderfully poignant rendering of the old spiritual, “When Israel Was in Egypt’s Land, Let My People Go.”

Asked to describe her voice, she says “it’s moving, beautiful, and it touches people emotionally.”

And her vocal range? “Yet to be determined,” she laughs heartily.

Laughing hasn’t always come easily. An adopted child in a biracial household, she knew the sting of discrimination growing up in Las Vegas, which she says was “pretty segregated” in the 1960s.

Marquez, who began singing at the age of 3, got her start where many singers debut - in church. "The Lord gave me a gift,” she says, adding “I’m not religious at all, but I am spiritual.”

Twice she auditioned and twice she was turned down for the California Institute of Fine Arts. Not enough formal training, they said.

She holds a master’s degree in art education, specializing in art therapy, from California State University, Los Angeles, and a B.A. degree in art from Cal State, Northridge.

She saw plenty of hardship working with at-risk kids who were wards of the court in Los Angeles.

Her job, working with “withdrawn kids whose parents were former drug addicts.” was to use music and movement to get the kids to express themselves.

In another job at Good Samaritan Hospital in Los Angeles, Marquez worked with terminally ill adults, including AIDS patients.

The Rev. Tiana Marquez was featured

as the story teller and singer during the annual Black-Jewish Seder to Celebrate Freedom held at the Jewish Community Center of Washtenaw County.

“My role,” she says, “was to listen, visit and use music as a tool in healing.”

After taking private voice lessons, Marquez traveled to Europe, where she sang in churches, doing her mix of spirituals, arias and material she had written.

Marquez, who is married, came to Ann Arbor in 1994. She has sung for audiences at the National Women’s Music Festival in Bloomington, Ind., at Gospelfest ’97 in Canada and at a Tribute to Marian Anderson in Santa Monica, Calif.

Elaine Sims heard her sing at last year’s Gifts of Art Thursday concert series at University of Michigan Hospitals. “It was a glorious performance that brought warmth and comfort to our patients,” she says.

Willis Paterson, associate dean at the University of Michigan School of Music, says Marquez has “a very fine gift, a large instrument rangewise, and she’s a very committed performer.”

Marquez’s first, and so far only, CD came out in 1996. But another is in the works, timed to coincide with Christmas. It’s called “Healing Celebration.”

“What I bring to music touches people,” Marquez says. “The most fulfilling thing is when you touch people or make a difference.