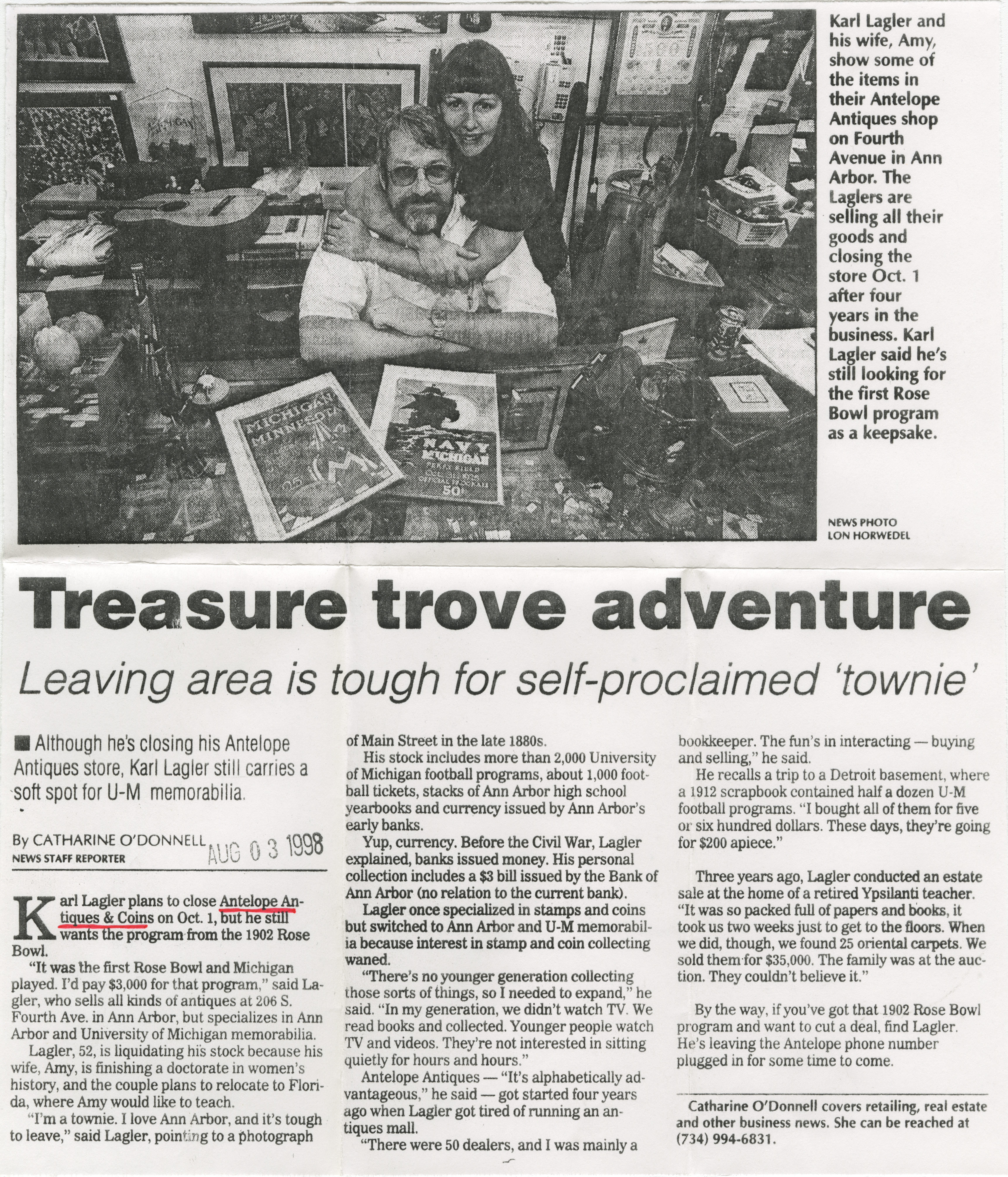 ﻿Karl Lagler and his wife, Amy, show some of the items in their Antelope Antiques shop on Fourth Avenue in Ann Arbor. The Laglers are selling all their goods and closing the store Oct. 1 after four years in the business. Karl Lagler said he's still looking for the first Rose Bowl program as a keepsake.

Karl Lagler plans to close Antelope Antiques & Coins on Oct. 1, but he still wants the program from the 1902 Rose

“It was the first Rose Bowl and Michigan played. I’d pay $3,000 for that program,” said Lagler, who sells all kinds of antiques at 206 S. Fourth Ave. in Ann Arbor, but specializes in Ann Arbor and University of Michigan memorabilia.

Lagler, 52, is liquidating his stock because his wife, Amy, is finishing a doctorate in women’s history, and the couple plans to relocate to Florida, where Amy would like to teach.

“I’m a townie. I love Ann Arbor, and it’s tough to leave,” said Lagler, pointing to a photograph of Main Street in the late 1880s.

Yup, currency. Before the Civil War, Lagler explained, banks issued money. His personal collection includes a $3 bill issued by the Bank of Ann Arbor (no relation to the current bank).

Lagler once specialized in stamps and coins but switched to Ann Arbor and U-M memorabilia because interest in stamp and coin collecting waned.

“There’s no younger generation collecting those sorts of things, so I needed to expand,” he said. “In my generation, we didn’t watch TV. We read books and collected. Younger people watch TV and videos. They’re not interested in sitting quietly for hours and hours.”

Antelope Antiques — “It’s alphabetically advantageous,” he said — got started four years ago when Lagler got tired of running an antiques mall.

“There were 50 dealers, and I was mainly a bookkeeper. The fun’s in interacting — buying and selling,” he said.

He recalls a trip to a Detroit basement, where a 1912 scrapbook contained half a dozen U-M football programs. “I bought all of them for five or six hundred dollars. These days, they’re going for $200 apiece.”

Three years ago, Lagler conducted an estate sale at the home of a retired Ypsilanti teacher. “It was so packed full of papers and books, it took us two weeks just to get to the floors. When we did, though, we found 25 oriental carpets. We sold them for $35,000. The family was at the auction. They couldn’t believe it.”

By the way, if you’ve got that 1902 Rose Bowl program and want to cut a deal, find Lagler. He’s leaving the Antelope phone number plugged in for some time to come.

Catharine O'Donnell covers retailing, real estate and other business news. She can be reached at (734) 994-6831.