Long in the making, 'Talking Cure' could use more time in the doing 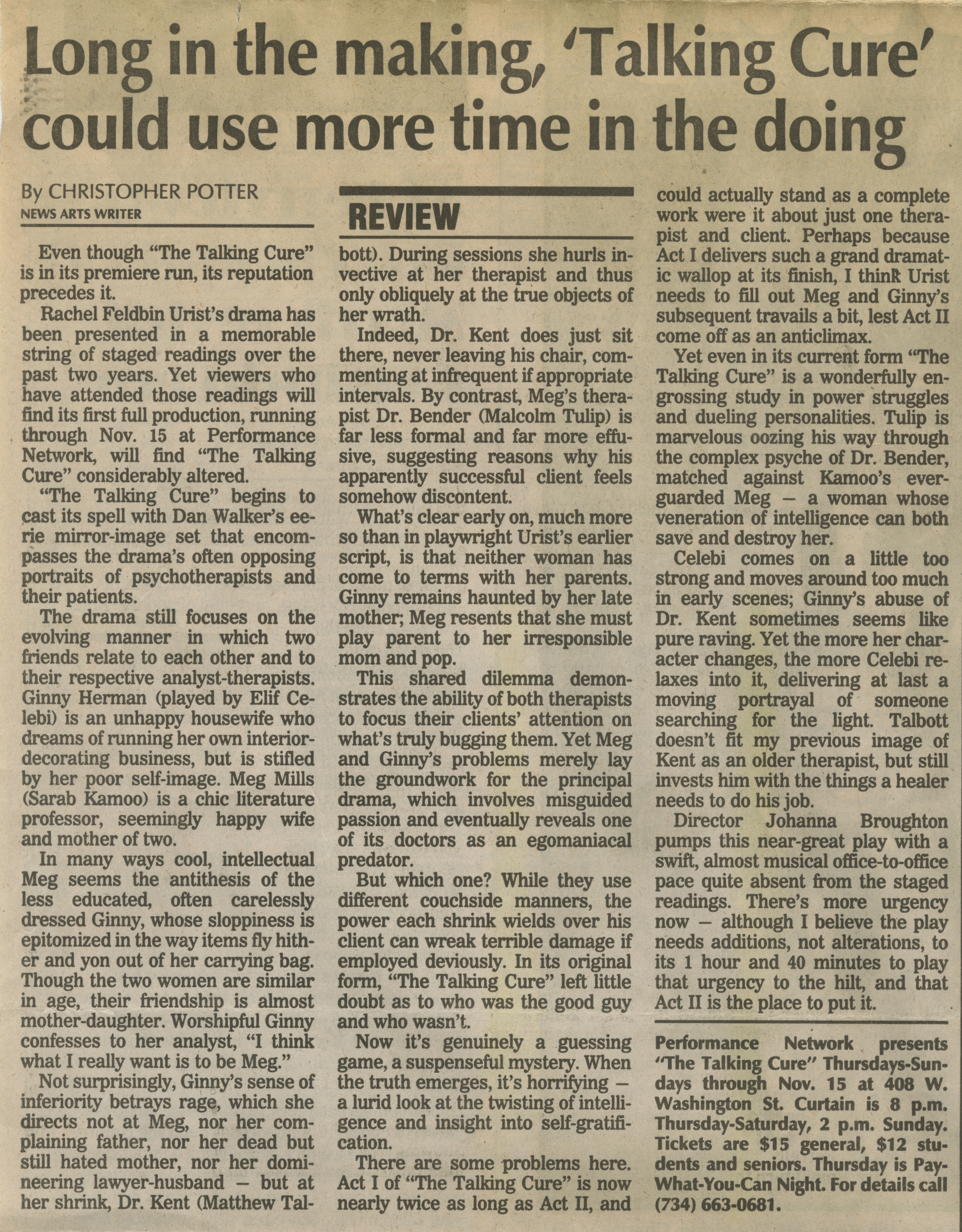 ﻿Long in the making, 'Talking Cure' could use more time in the doing

Even though “The Talking Cure” is in its premiere run, its reputation precedes it.

Rachel Feldbin Urist’s drama has been presented in a memorable string of staged readings over the past two years. Yet viewers who have attended those readings will find its first full production, running through Nov. 15 at Performance Network, will find “The Talking Cure” considerably altered.

“The Talking Cure” begins to cast its spell with Dan Walker’s eerie mirror-image set that encompasses the drama’s often opposing portraits of psychotherapists and their patients.

The drama still focuses on the evolving manner in which two friends relate to each other and to their respective analyst-therapists. Ginny Herman (played by Elif Ce-lebi) is an unhappy housewife who dreams of running her own interiordecorating business, but is stifled by her poor self-image. Meg Mills (Sarab Kamoo) is a chic literature professor, seemingly happy wife and mother of two.

In many ways cool, intellectual Meg seems the antithesis of the less educated, often carelessly dressed Ginny, whose sloppiness is epitomized in the way items fly hither and yon out of her carrying bag. Though the two women are similar in age, their friendship is almost mother-daughter. Worshipful Ginny confesses to her analyst, “I think what I really want is to be Meg.”

Not surprisingly, Ginny’s sense of inferiority betrays rage, which she directs not at Meg, nor her complaining father, nor her dead but still hated mother, nor her domineering lawyer-husband - but at her shrink, Dr. Kent (Matthew Talbott)

During sessions she hurls invective at her therapist and thus only obliquely at the true objects of her wrath.

What’s clear early on, much more so than in playwright Urist’s earlier script, is that neither woman has come to terms with her parents. Ginny remains haunted by her late mother, Meg resents that she must play parent to her irresponsible mom and pop.

This shared dilemma demonstrates the ability of both therapists to focus their clients’ attention on what’s truly bugging them. Yet Meg and Ginny’s problems merely lay the groundwork for the principal drama, which involves misguided passion and eventually reveals one of its doctors as an egomaniacal predator.

But which one? While they use different couchside manners, the power each shrink wields over his client can wreak terrible damage if employed deviously. In its original form, “The Talking Cure” left little doubt as to who was the good guy and who wasn’t.

Now it’s genuinely a guessing game, a suspenseful mystery. When the truth emerges, it’s horrifying - a lurid look at the twisting of intelligence and insight into self-gratification.

There are some problems here. Act I of “The Talking Cure” is now nearly twice as long as Act II, and could actually stand as a complete work were it about just one therapist and client. Perhaps because Act I delivers such a grand dramatic wallop at its finish, I think Urist needs to fill out Meg and Ginny’s subsequent travails a bit, lest Act II come off as an anticlimax.

Yet even in its current form “The Talking Cure” is a wonderfully engrossing study in power struggles and dueling personalities. Tulip is marvelous oozing his way through the complex psyche of Dr. Bender, matched against Kamoo’s ever-guarded Meg - a woman whose veneration of intelligence can both save and destroy her.

Celebi comes on a little too strong and moves around too much in early scenes; Ginny’s abuse of Dr. Kent sometimes seems like pure raving. Yet the more her character changes, the more Celebi relaxes into it, delivering at last a moving portrayal of someone searching for the light. Talbott doesn’t fit my previous image of Kent as an older therapist, but still invests him with the things a healer needs to do his job.

Director Johanna Broughton pumps this near-great play with a swift, almost musical office-to-office pace quite absent from the staged readings. There’s more urgency now - although I believe the play needs additions, not alterations, to its 1 hour and 40 minutes to play that urgency to the hilt, and that Act II is the place to put it.