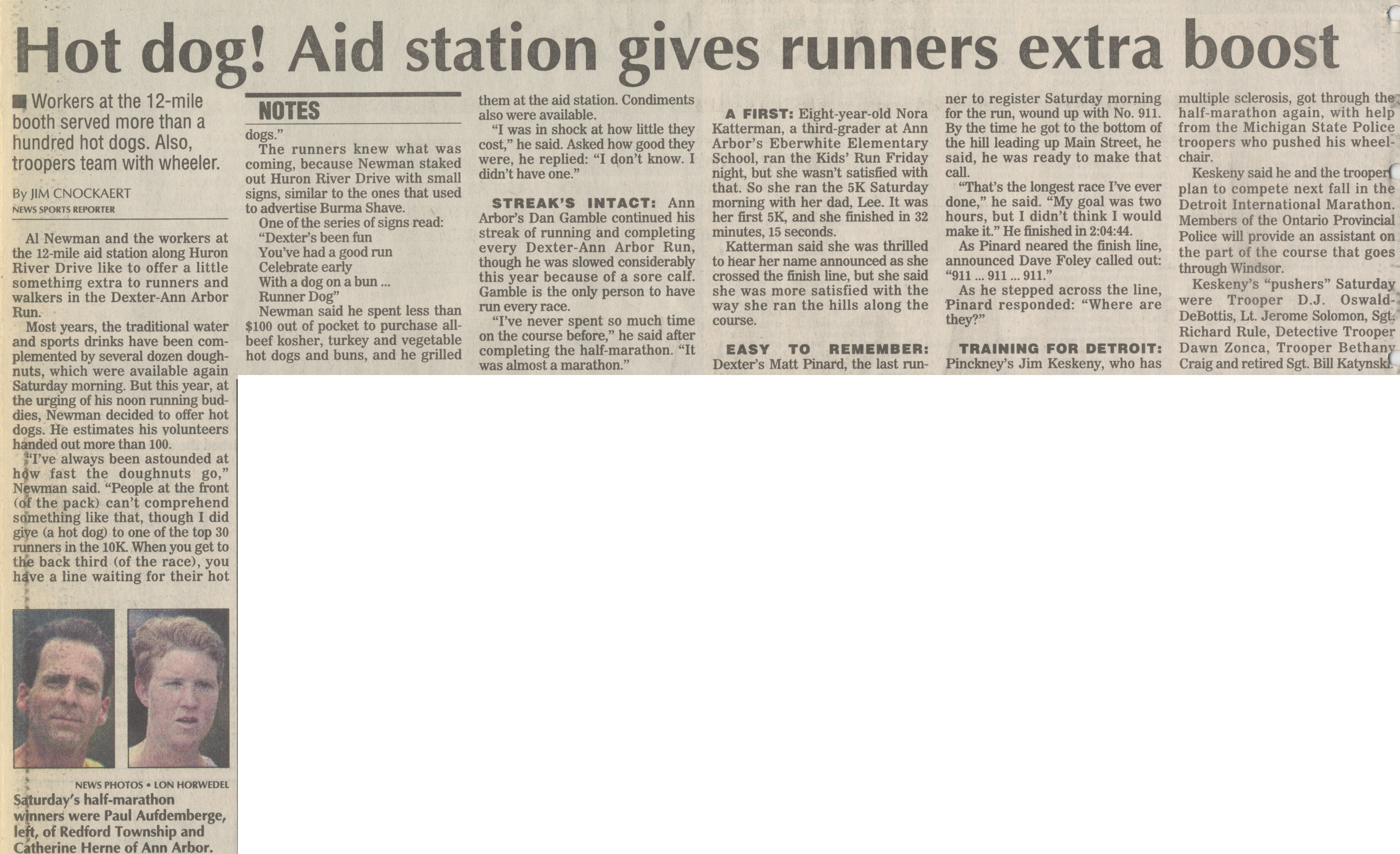 Al Newman and the workers at the 12-mile aid station along Huron River Drive like to offer a little something extra to runners and walkers in the Dexter-Ann Arbor Run.

Most years, the traditional water and sports drinks have been complemented by several dozen doughnuts, which were available again Saturday morning. But this year, at the urging of his noon running buddies, Newman decided to offer hot dogs. He estimates his volunteers handed out more than 100.

I've always been astounded at how fast the doughnuts go," Newman said. "People at the front of the (of the pack) can't comprehend something like that, though I did give (a hot dog) to one of the top 30 runners in the 10K. When you get to the back third (of the race), you have a line waiting for their hot dogs."

The runners knew what was coming, because Newman staked out Huron River Drive with small signs, similar to the ones that used to advertise Burma Shave.

One of the series of signs read:

You’ve had a good run

Newman said he spent less than $100 out of pocket to purchase all-beef kosher, turkey and vegetable hot dogs and buns, and he grilled them at the aid station. Condiments also were available.

“I was in shock at how little they cost,” he said. Asked how good they were, he replied: “I don’t know. I didn’t have one.”

STREAK’S INTACT: Ann Arbor’s Dan Gamble continued his streak of running and completing every Dexter-Ann Arbor Run, though he was slowed considerably this year because of a sore calf. Gamble is the only person to have run every race.

“I’ve never spent so much time on the course before,” he said after completing the half-marathon. “It was almost a marathon.”

A FIRST: Eight-year-old Nora Katterman, a third-grader at Ann Arbor’s Eberwhite Elementary School, ran the Kids’ Run Friday night, but she wasn’t satisfied with that. So she ran the 5K Saturday morning with her dad, Lee. It was her first 5K, and she finished in 32 minutes, 15 seconds.

Katterman said she was thrilled to hear her name announced as she crossed the finish line, but she said she was more satisfied with the way she ran the hills along the course.

EASY TO REMEMBER:
Dexter’s Matt Pinard, the last runner to register Saturday morning for the run, wound up with No. 911. By the time he got to the bottom of the hill leading up Main Street, he said, he was ready to make that call.

As he stepped across the line, Pinard responded: “Where are they?”

TRAINING FOR DETROIT:
Pinckney’s Jim Keskeny, who has multiple sclerosis, got through the half-marathon again, with help from the Michigan State Police troopers who pushed his wheelchair.

Keskeny said he and the troopers plan to compete next fall in the Detroit International Marathon. Members of the Ontario Provincial Police will provide an assistant on the part of the course that goes through Windsor.