Reign Of Terror At Wounded Knee 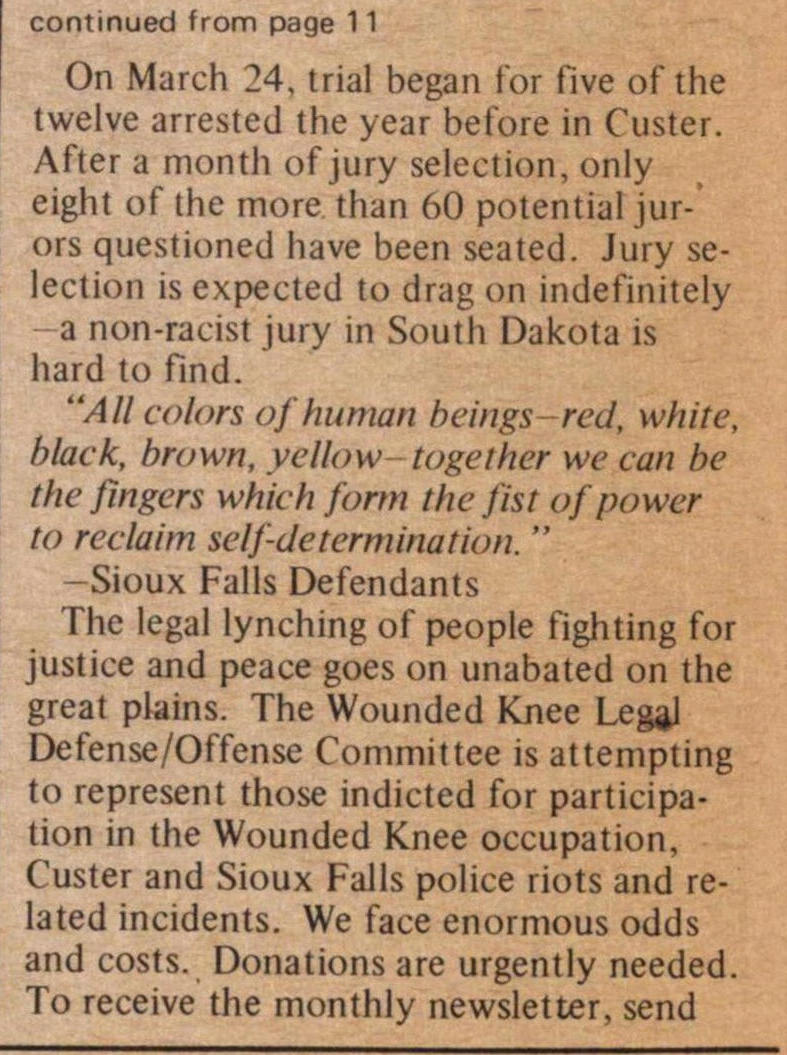 In 1973, at Wounded Knee, South Dakota, the site of the 1890 massacre of 300 unarmed Indians, the Federal Government laid siege to residents of the Pine Ridge Indian Reservation. As a result of the Indian's resistance to the siege, hundreds of Wounded Knee participants were indicted on State and Federal criminal charges.

Two years after the occupation one might ask: Why has the government spent more than two years and millions of dollars trying to convict these people? Why is is the government continuing to prosecute after over 80 cases have been won on acquittal or dismissal by the court? Why has a reign of terror begun in which 11 people have been killed on the Pine Ridge Reservation in the past month alone? Why were over 20 American Indian Movement (AIM) leaders arrested within 48 hours of each other last March?

The answers must be that the U.S. is clearly committed to a program of genocide directed against Native Americans; a program that insures continued exploitation of Indian lands. AIM is the focus for government repression of the Indian nation because AIM is the spearhead of the Native American movement in North America, a staunch defender of Indian civil and treaty rights. As long as AIM organizes Indians to demand and defend sovereign treaty rights, the exploitation and rip-off of Indian lands will be no easy task for the government or multi-national corporations.

During the occupation of Wounded Knee a group of corporations appeared before N. Dakota's Water Commission which granted leases on water from Lake Skakauea and the Missouri River. This is to be used for coal gassification plants, the the first of which is to be built by Consolidated Coal Co. (owned by Continental Oil), at Rapid City, S.D. As to the environmental impact of coal gassification, a University of Arizona professor told a mining symposium that "the smoke doesn't bother anything but the Indians and a few sheep."

Peabody Coal, a subsidiary of Kennecott Copper Co. has leased 157,555 acres on the Northern Cheyenne Reservation from the Department of Interior. Mining, timber and oil resources on Indian reservations have caught the eye of profit-seeking big business.

The bureau of Indian Affairs (BIA), which is an agency of the Department of the Interior, is leasing Indian land on the Pine Ridge Reservation without tribal approval to white ranchers for a fraction of its rental value. Illegal traders have been permitted to enter the reservation and overcharge residents who cannot afford to travel long distances for food and supplies.

As in other colonized nations, the ex-tation of Indian natural resources is protected by government agencies. In this case the BIA under the Dept. of Interior. The capitalists need a front man on the reservation, a puppet such as Thieu, Lon Nol or Dick Wilson, the illegitimate Chairman of the Pine Ridge Tribal Council.

In 1973 grievances mounted with the fraudulent election of Wilson. With BIA assistance, Wilson bought votes, and brought non-residents to the reservation to vote. In the months following his victory, Wilson's opponents lost their jobs and suffered continual harassment.

Recently, Wilson's harassment of AIM supporters and Indians who oppose him has escalated to the point of terror.

Legal workers and attorneys have been pulled from cars, brutalized and assaulted with weapons by Wilson and his now infamous "goon squad." Since the beginning of March 11 people have been killed on the Pine Ridge Reservation. most, of them AIM supporters.

"They use law today like they used cavalry years ago. They are using law to destroy us." - John Trudell, AIM Nat'l. Chrmn.

On March 12, Assistant U.S. Attorney General J. Stanley Pottinger announced the convening of a Special Grand Jury to investigate violence on the reservation. William Clayton, U.S. Attorney for South Dakota will be in charge of presenting witnesses to the grand jury. The Dakota people have long pointed to him as the key obstacle in their fight for justice. Clayton is quick to seek indictments against AIM members and supporters, but to this day has not sought to indict Wilson or his goons for the viciousness and murder they have committed at Pine Ridge.

As in the past, U.S. strategy is to get as many AIM leaders and supporters as possible behind bars, or engaged in time and money-consuming legal battles. No sooner does a defendant get acquitted or a case dismissed (usually due to lack of evidence, illegal wiretaps or gross misconduct on the the part of the government) than another indictment is handed down.

29 defendants still await trial on federal charges stemming from their activities at Wounded Knee, these trials will begin May 19 in Council Bluffs, Iowa. An additional 20 defendants must go before inevitably racist juries in Custer South Dakota to face charges stemming out of a police riot which occurred on Feb. 6, 1973. On that date more than 100 Indians had gathered at the Custer courthouse to peacefully protest the local authorities' failure to prosecute the white man who murdered Wesley Bad Heart Bull. The police attacked the Indians, yet 20 Native Americans were charged with crimes.

In early April 1974, five of the Custer Defendants went to trial in Sioux Falls, S. Dakota. During the trial spectators refused to stand for the judge. Judge Bottom ordered 20 tactical police with full riot gear to clear the courtroom. All Indian spectators received injuries, eight requiring hospitalization. 12 Indians in all were charged with crimes ranging from riot to injury to a public building.

On March 24, trial began tor five of the twelve arrested the year before in Custer. After a month of jury selection, only eight of the more than 60 potential jurors questioned have been seated. Jury selection is expected to drag on indefinitely-- a non-racist jury in South Dakota is hard to find.

"All colors of human beings red, white, black, brown, together we can be the fingers which form the fist of power to reclaim self-determination. "
-Sioux Falls Defendants