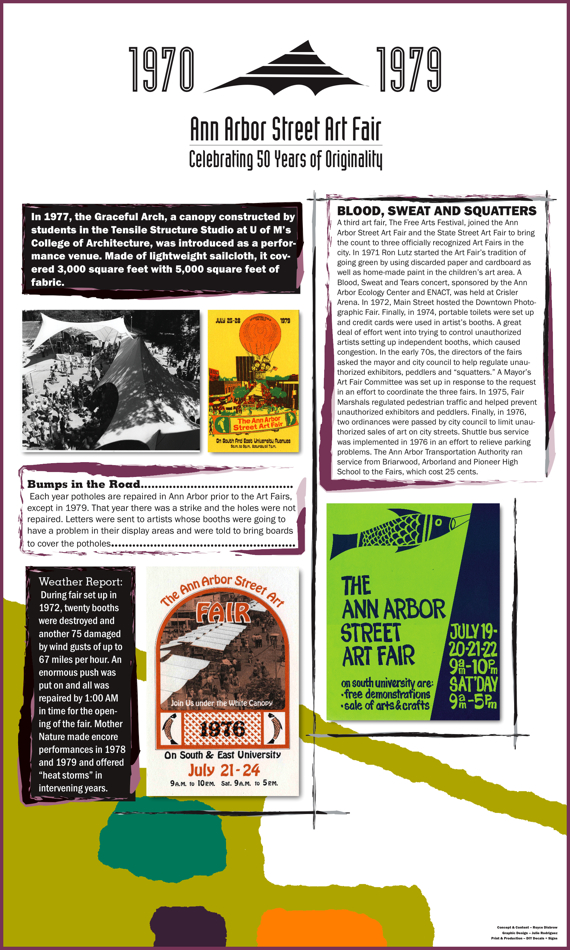 Blood, Sweat and Squatters
A third art fair, The Free Arts Festival, joined the Ann Arbor Street Art Fair and the State Street Art Fair to bring the count to three officially recognized Art Fairs in the city. In 1971 Ron Lutz started early recycling using discarded paper and cardboard as well as home-made paint in the children’s art area. A Blood, Sweat and Tears concert, sponsored by the Ann Arbor Ecology Center and ENACT, was held at Crisler Arena. In 1972, Main Street hosted the Downtown Photographic Fair. Finally, in 1974, portable toilets were set up and credit cards were used in artist’s booths. A great deal of effort went into trying to control unauthorized artists setting up independent booths causing congestion. In the early 70s, the directors of the fairs asked the mayor and city council to help regulate unauthorized exhibitors, peddlers and “squatters.” A Mayor’s Art Fair Committee was set up in response to the request in an effort to coordinate the three fairs. In 1975, Fair Marshals regulated pedestrian traffic and helped prevent unauthorized exhibitors and peddlers. Finally, in 1976, two ordinances were passed by city council to limit unauthorized sales of art on city streets. Shuttle bus service was implemented in 1976 in an effort to relieve parking problems. The Ann Arbor Transportation Authority ran service from Briarwood, Arborland and Pioneer High School to the Fairs; cost 25 cents.

Weather Reports
On Tuesday afternoon in 1972 during set up, twenty booths were destroyed and another 75 damaged by wind gusts of up to 67 miles per hour. An enormous push was put on and all was repaired by 1:00 AM in time for the opening of the fair. Mother Nature made encore performances in 1978 and 1979 and offered “heat storms” in intervening years.

Bumps in the Road
Each year potholes are repaired in the streets of Ann  Arbor prior to the Art Fairs except in 1979. There was a strike and holes were not fixed in time. Letters were sent to artists whose booths were going to have a problem in their display areas and told to bring boards to cover the potholes.