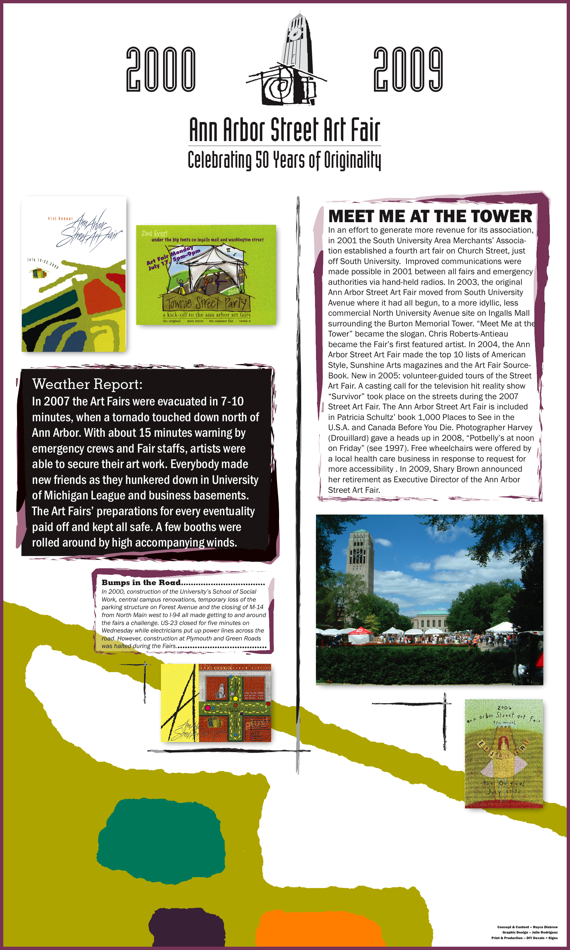 Meet Me at the Tower
In an effort to generate more revenue for its association, in 2001 the South University Area Merchants’ Association established a fourth art fair on Church Street just off South University. Improved communications were made possible in 2001 between all fairs and emergency authorities via hand-held radios. In 2003, the original Ann Arbor Street Art Fair moved from South University Avenue where it all began, to a more idyllic, less commercial North University Avenue site on Ingalls Mall surrounding the Burton Memorial Tower. “Meet Me at the Tower” became the watch word. Chris Roberts-Antieau became the Fair’s first featured artist. In 2004, the Ann Arbor Street Art Fair made the top 10 lists of American Style, Sunshine Arts magazines and the Art Fair SourceBook. New in 2005: volunteer-guided tours of the Street Art Fair. A casting call for the television hit reality show “Survivor” took place on the streets during the 2007 Street Art Fair. The Ann Arbor Street Art Fair is included in Patricia Schultz’ book 1,000 Places to See in the U.S.A. and Canada Before You Die.

Photographer Harvey (Drouillard) gave a heads up in 2008, “Potbelly’s at noon on Friday.” Free wheel chairs were offered by local health care business in response to request for more accessibility . In 2009, Shary Brown announced her retirement as Executive Director of the Ann Arbor Street Art Fair.

Weather Reports
In 2007 the Art Fairs were evacuated in 7-10 minutes, when a tornado touched down north of Ann Arbor. With about 15 minutes warning by emergency crews and Fair staffs, artists were able to secure their art work. Everybody made new friends as they hunkered down in University of Michigan and business’ basements. The Art Fairs’ preparations for every eventuality paid off and kept all safe. A few booths were rolled around by high accompanying winds.

Bumps in the Road
In 2000, construction of the University’s School of Social Work, central campus renovations, temporary loss of the parking structure on Forest Avenue and the closing of M-14 from North Main west to I-94 all made getting to and around the fairs a challenge. US-23 closed for five minutes on Wednesday while electricians put up power lines across the road. However, construction at Plymouth and Green Roads was halted during the Fairs.