Eleanor of Aquitaine, born around 1122, was the eldest child of the 19th Duke of Aquitaine. Aquitaine was a large swath of feudal lands in what is now France. The king of France was overload to the noble landholders of surrounding French regions, but the lords owned and controlled their lands as rulers themselves. Aquitaine was the creme de la creme of French lands. The duke's court was a glittering bastion of luxury, learning, and culture to rival that of the king of France. Eleanor's father made sure she received the best education possible - so she excelled not only at "womanly" arts like sewing and household management, but also reading, writing, history, mathematics, politics, latin, riding, and hunting. This was anything but the standard education for women (even noblewomen) in medieval Europe and, coupled with Eleanor's head-strong spunk, paved the way for the unruly life she would later lead. Find the first name of her father and search the catalog to eke out your code.

This badge has been awarded to 425 players

This was even more fun than…

This was even more fun than usual as I have discovered that Eleanor of Aquitaine is my 26th great-grandmother! She led a very interesting and amazing life! One of her descendants came to America as part of the Great Puritan Migration in 1639 - William Skepper.

ssmyth, that's so interesting! Thanks for letting us know. I enjoyed this badge very much, as I do all of the Unruly Royal ones, since they all very interesting to learn about!

@ssmyth That is fascinating about your 26th great-grandmother!! 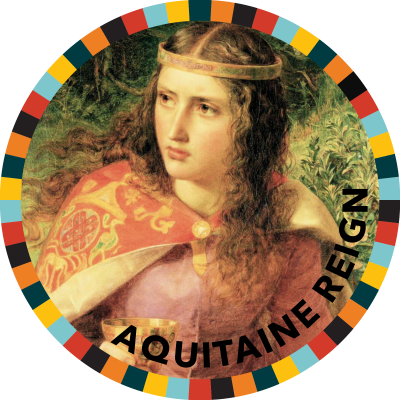