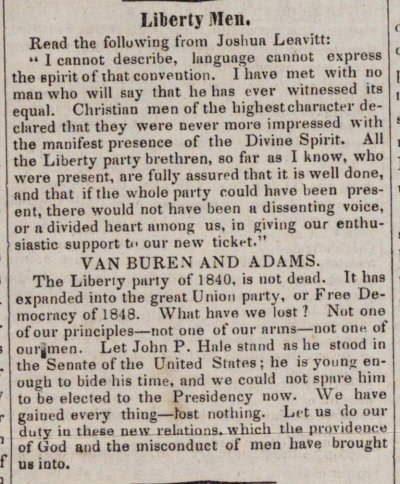 Read the folluwing trom Joshua Leavitt: " 1 cnnnot describe, hingunge cannot express the Bpiiitof that convention. 1 havo met with no mnnwho will say that he has ever witnessed its equal. Christian men of the highestcharacter declared that they were more impressed with the manifest presence of the Divine Spirit. All the Liberty party brethren, so fiir as I know, who were present, are fully assured that it is well done, and that if the whole party rould have lieen present, there would not have been a dissenting voice, or n divided heart ninong us, in giving our enthusiastic support tn our new ticket." VAN BUREN AND ADAMS. The Liberiy party of 1840, is not dead. lt has expanded into the great Union party, or Free Democnicy of 1848. What have we lost ? Nut one_ of our principies - not one of our anns - not onn of ourlmeD. Let John P. Hale stand ns he stood in the Senate of the United States ; he is youns enough to bide his time, and we could not spare him to be elecled to the Presidency now. We have gaincd every thing - tost nothing. Let us do our duly ia these new relations, which the pnividenre of Uod and the misconduct of men have brought ub into.