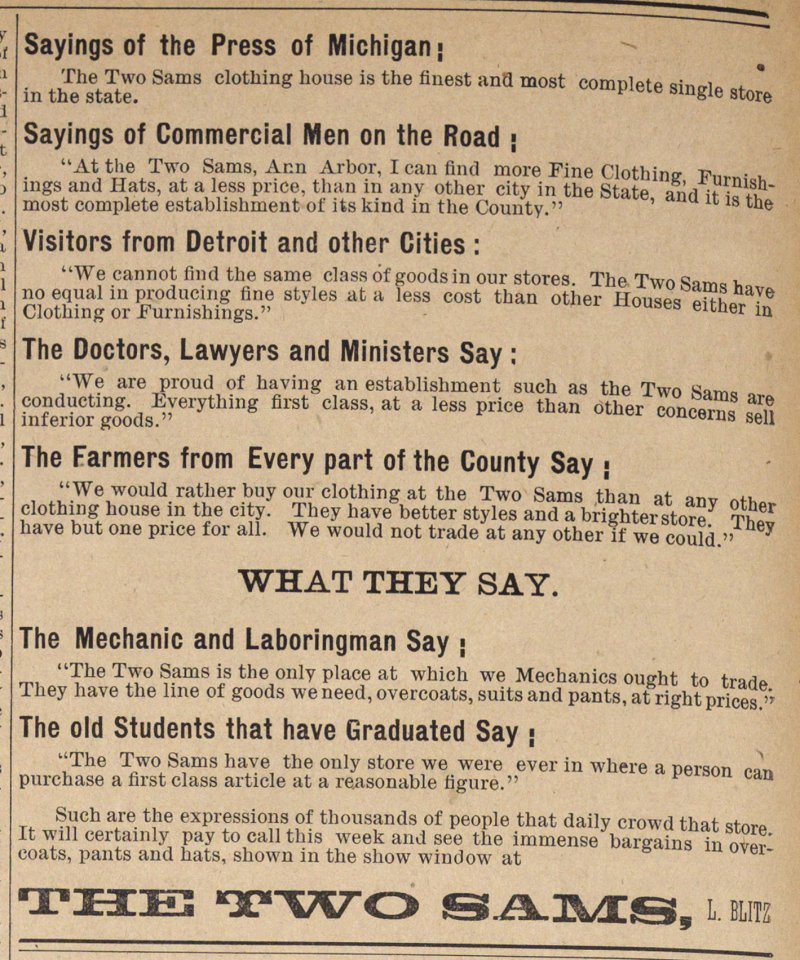 Sayings of the Press of Michigan ; The Two Sams clotliing house is the fiuest anfl most complete iítim i in the state. ugie store Sayings of Commercial Men on the Road ■ "At the Two Sams, Ann Arbor, I can find more Fine Clothine u mgs and Hats, at a less pnce, than in any other city in the State anri t ■ ' most complete establishment of its kind in the County." ll ls the Visitors from Detroit and other Cities : "We cannot find the same class óf goods in our stores The Two Sim v, no equal in producing flne styles at a less cost than other Houses puLt6 Clothing or Furnishings." eiiner iu The Doctors, Lawyers and Ministers Say : "We are proud of having an establishment such as the Two Sam ïXïSolSeiytMn8 ÖrSt ClaSS'at a l6SS P1"ice tban other icTrns'se?! The Farmers from Every part of the County Say "We wouldrather buy our clothing at the Two Sams than at anv 0ti,o clothing house in the city. They have better styles and a brighter store Thf have but one pnce for all. We would not trade at any other if we could " 7 WHAT THEY SAY. The Mechanic and Laboringman Say ; "The Two Sams is the only place at which we Mechanics ought to trado They have the line of goods we need, overcoats, suits and pants, at right prices!" The old Students that have Graduated Say ''The Two Sams have the only store we were ever in where a person pan purchase a first class article at a reasonable ügure." Such are the expressions of thousands of people that daily crowd that stnro It will certainly pay to cali this week and see the immense bargains inn,„ coats, pants and hats, shown in the show window at