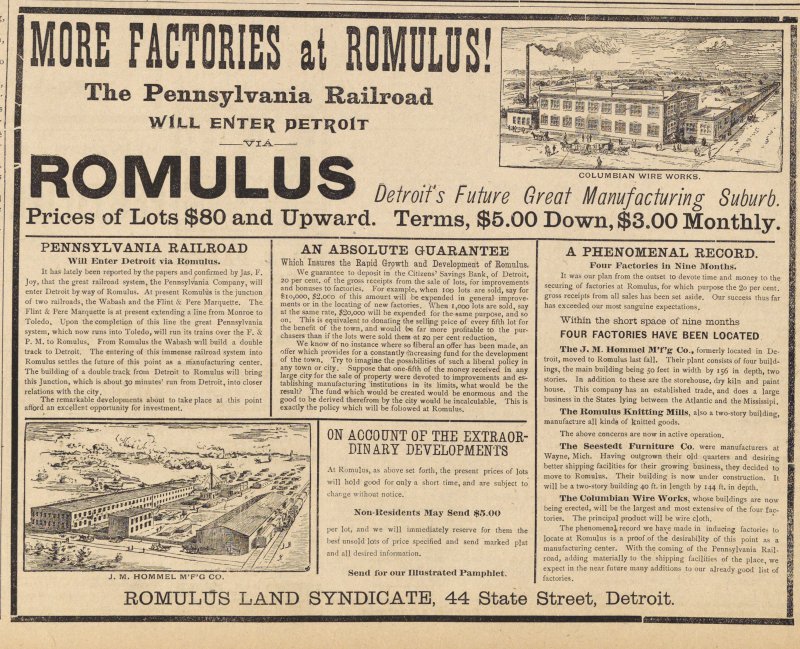 (MORE FACTORIES at ROMOS! I The Pennsylvania Railroad I WÍJLL EISÍTEI pETIOÍT ■■■■■■■HBBaflBBBBBBBBBaBBBHaHílHiHBBBLaíi ui_u ivi dia l wint, WOKKö. Detroit' s Future Great Manufaduring Suburb. . Terms, $5.00 Down, $3.00 Monthly. Prices of Lots $80 and Upward PENNSYLVANIA RAILROAD AN ABSOLUTE GUARANTEE Will Enter Detroit via Komulus. Which Insures the Eapid Growth and Development of Eomulus. It has lately been reported by the papers and confirmed by Jas. F. We guarantee to deposit in the Citizens' Savings Bank, of Detroit, Joy, that the great railroad system, the Pennsylvania Company, will 20 Per of the Sross receipts from the sale of lots, for improvements enter Detroit by way of Romulus. At present Romulus is the junction nd bonues to faetones. Kor example, when loo lots are sold, say for (, i a ,u r ui 11. ttv .on „r J -T-u % 1 0,000, $2,oco of this araount will be expended in general improveof two railroads, the Wabash and the Flml & Pere Marquette. The ments or in the locating of new factories. When 1,000 lots are sold, say Flint & Pere Marquette is at present extending a line from Monroe to at the same rate, J2o,ooo will be expended for the same purpose, and so Toledo, Upon the completion of this line the great Pennsylvania This is equivalent to donating the selling price of every fifth lot for system, which now runs into Toledo, will run its trains Over the F. & le hen f 'h.e t,OWn' and w.,ulí far more Potable to the purb ut i v 1 tt d 1 rt. , , „ , -, , , , , chasers than 11 the lots were sold thera t 20 per cent reduction. P. M. to Romulus, From Romulus the Wabash will build a doublé We know of no instance where so liberal an offer has been made, an track to Detroit. The entering oí this immense railroad system into ffer which provides for a constantly íiicreasing fund for the development Romulus settles the future of this point as a manufacturing center tlle Try to imagine the possibilities of such a liberal policy in The building of a doublé track from Detroit to Romulus will bring ZVeZl Z %L' T T ' f '?' mney reCeÍVed " ...T. ,.,., , , .. ,b large Clty for the sale of property were devoted to improvements and esthis Junction, which is about 30 minutes' run from Detroit, into closer tablishing manufacturing institutions in its limits, what would be the relations with the city. result? The fund which would be created would be enormous and the The remarkable developments about to take place at this point good to be derived therefrom by the city would be incalculable. This is afförd an excellent opportunity for investment. exaclly the policy which will be followed at Romulus. J. M. HOMMEL M'F'G CO. ON ACCOUNT OF THE EXTRAORDINARY DEVELOPMENTS At Romulus, as above set forth, the present prices of lots will hold good for only a short time, and are subject to charge without notice. Noii-liesidents May Send $5.00 per ]ot, and we will immediately reserve for them the best unsold lots of price specified and send raarked plat and all desired information. Send for our Illustrated Pamphlet. A PHENOMENAL RECORD. Four Factories in Nine Montlis. It was our plan from the outset to devote time and money to the securing of factories at Romulus, for which purpose the 2o per cent, gross receipts from all sales has been set aside. Our success thus far has exceeded our most sanguine expectations. Within the short space of nine months FOUR FACTORIES HAVE BEEN LOCATED The J. M. Hommel M'f 'g Co., formerly located in Ie troit, moved to Romulus last fa] I. Their plant consists of four buildings, the main building being 50 f eet in width by 156 in depth, two stories. In addition to these are the storehouse, dry kiln and paint house. This company has an established trade, and does a large business in the States lying between the Atlantic and the Mississipi. The RomUlUS Knitting Mills, also a two-story building, manufacture all kinds of knitted goods. The above concerns are now in active operation. The Seestedt Furniture Co. were manufacturen at Wayne, Mich. Having outgrown their old quarters and desiring better shipping facilities for their growing business, they decided to B move to Romulus. Their building is now under construction. It 8 will be a two-story building 40 ft. in lenglh by 144 ft, in depth. The Colunibian Wire Works, whose buildings are now ■ being erected, will be the largest and most extensive of the four faetones. The principal product will be wire cloth. The phenomenal record we have made in inducing factories to f& lócate at Romulus is a proof of the desirability of this point as a IS manufacturing center. With the coming of the Pennsylvania RailI road, adding materially to the shipping facilities of the place, we Á expect in the near future many additions to our already good list of factories. W, ROMULÜS LAND SYNDICATE, 44 State Street, Detroit. HEflHCB CAiflB IHHflHKfiSHHHH B3BBB BB BBBBBBBBiBm