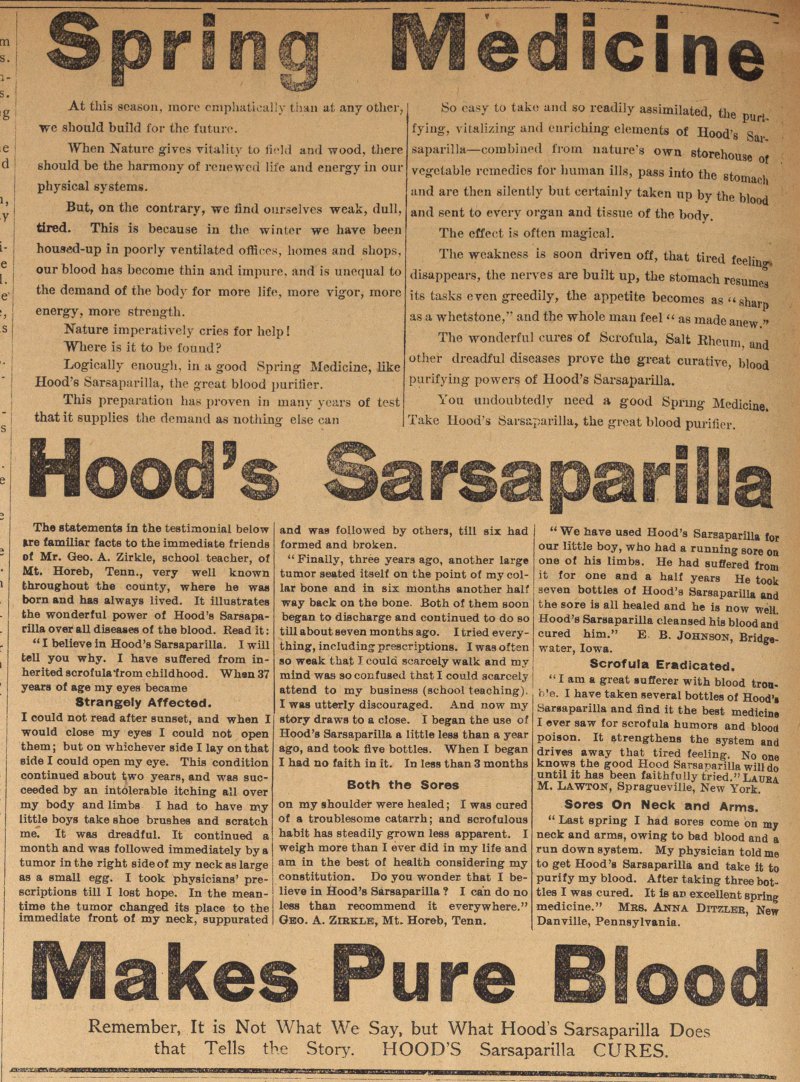 Spring Medicine At this scason, more emphatically thau at any othcr, So easy to take and so readijy assimilated th wc should build for the future. fyi"g vitalizing and enriching elementa of Ilood's s When Nature gives ritality to field and wood, there saparilla - combined from nature's own storehous should be the harmony of renewed life and energy in our vegetable remedies for human ills, pass into the sto physical systems. .„„, ai.c th(.tl slently bllt certainljr taken np by the btood But, on the contrary, we find ourselves weak, dull, an(i SPnt to eveiy „,.gan and tissue of the body. üred. This is because in the winter wc have been The effect is offon magical. housd-up in poorly ventilated offi;os, homes and shops, The weakness is soon driven off, that tired fee]in our blood has bocome thin and impure, and is unequal to disappears, the nerves are built up, the etomach resumT the demand of the body for more Ufe, more vigor, inore its tasks fircn greedily, the appetite becomes as 8har energy, more Btrength. as a aild the whole mau feel as made aae JI SSrïKtïiS? for help! The (-es oi - Ü Logically eaough, in agood Spring Medicine, like Oth dradful dÍSeaS6S prT6 the grcat Wood Hood's Sarsaparilla, the great blood puriflér. purifying powers of Ilood's Sarsaparilla. This preparation has proven in many years of test You andoubtedJy need a good Spnng Medicine thatit supplies the demand as nothing else can Tuke Ilood's Sarsaparilla, the great blood purifier. The statements in the testimonial below and was followed by others, till six had "Wehaveused Hood's Sarsaparilla lo U-e familiar facts to the immediate f riends (ormed and broken. our little boy, who had a running sore o i of Mr. Geo. A. Zirkle, school teacher, of "Finally, three years ago, another large one of nis limbs. He had Buffered froa Mt. Horeb, Tenn., very well known tumor seated itself on the point of my colit for one and a half years He t throughout the county, where he was lar bone and in six rnonth another half 3even bottles of Hood'a Sarsaparilla bom and has always lived. It illustrates way back on the bone. Both of them soon the sore is all healed and he is now weli the wonderful power of Hood's Sarsapabegan to discharge and continued to do bo Hood's Sarsaparilla cleansed his blood and cilla over aUdiseases of the blood. Readit: till aboutsevenmonths ago. Itriedeverycured him." E. B. Johnson Brid "Ibelieve in Hood's Sarsaparilla. Iwiil thing, including prescriptions. Iwasoften water, Iowa. teU you why. I have suffered from inso weak that I could scarcely walk and rny Scrofula Eradicated heritedscrofulafromchildhood. Whsn37 mind was soconfused that I could scarcely I am a great ufferer with hl years of age my eyes became attend to my business (school teaching). We. I have taken several bottles of Hoïï. Strangely Affectod. I was utterly discouraged. And now my Sargaparilla and find it the belt medS I could not read after sunset, and when I story draws to a close. I began the use of i ever saw {or 8crofula humors and blZ would close my eyes I could not open Hood's Sarsaparilla a little lesg than a year poison. It atrengthens the svstem Zl them; but on whichever side I lay on that ago, and took flve bottles. When I began drTes away tbat tired feel Q side I could open my eye. This condition I had no faith in it. In less than 3 months knows the good Hood Sarsapariila will do continued about two years, and was sucuntil it has been faithfully tried." Laura ceeded by an intolerable itching all over Bth th8 Sores LAWTON, Spragueville, New York. my body and limbs I had to have my on my shoulder were healed ; I was cured Sores On Neck and Arms, little boys takeshoe brushea and scratch of a troublesome catarrh; and scrofulous "Last spring I had sores come on my meC It waa dreadful. It continued a habit has steadily grown less apparent. I neck and armn, owing to bad blood and a month and was followed immediately by a weigh more than I ever did in my life and run down system. My physician told me tumor in the right side of my neck as large ; am 'n tne Dest of health considering my to get Hood's Sarsaparilla and take it to as a small egg. I took physicians' pre-; constitution. Do you wonder that I bepurify my blood. After taking three botscriptions till I lost hope. In the meanlíeve in Hood's Sarsaparilla ? I can do no tles I was cured. It is an excellent spring time the tumor changed its place to the less than recommend it everywhere." medicine." Mrs. Anna Ditüxeb New immediate front of my neck, suppurated GBO. A. Zirkle, Mt. Horeb, Tenn. Danville, Pennsylvania. Remember, It is Not What We Say, but What Hood's Sarsaparilla Does that Tells the Story. HOOD'S Sarsaparilla CURES.