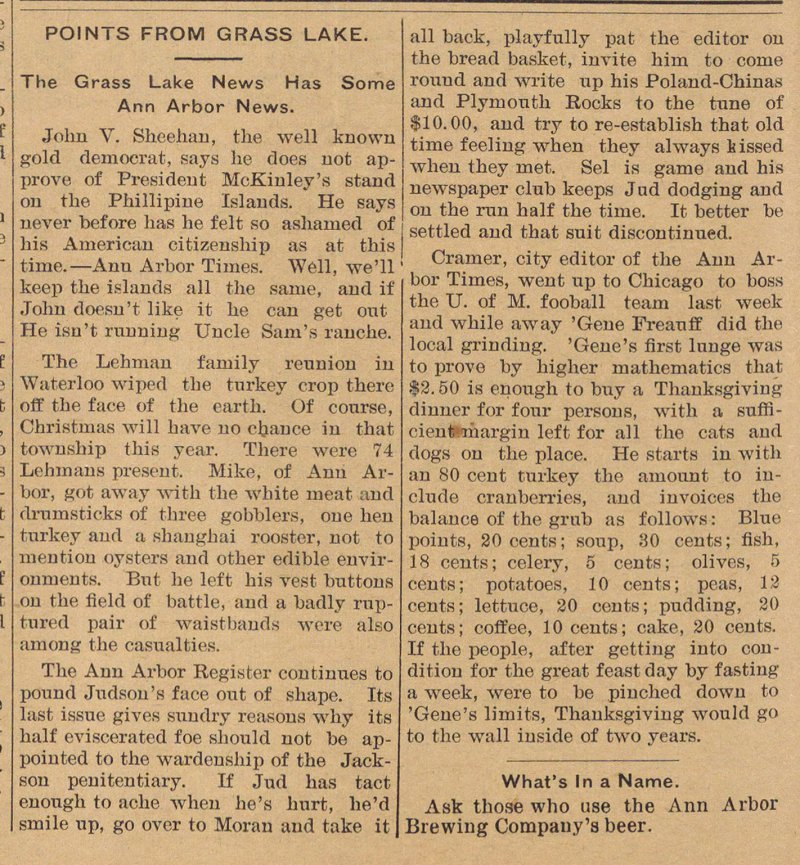 John V. Shcehan, the well known gold democrat, says he does not approve of President MeKinley's stand on the Phillipine Islands. He says never before has he feit so ashamed of his American citizensliip as at this time. - Anu Arbor Times. Well, we'll ' keep the islands all the same, and if John doesn't like it he can get out He isn't running Unció Sam's ranche. The Lehman family reunión in Waterloo wiped the turkey erop there off the face of the earth. Of course, Christmas wil] have no chance in that township this year. There were 74 Lehmans present. Mike, of Ann Arbor, got away with the white meat and rïrumstieks of three gobblers, one hen turkey and a Shanghai rooster, not to mention oysters and other edible environments. Bnt he left his vest buttons on the field of battle, and a badly niptured pair of waistbands were also among the casualties. The Ann Arbor Register continúes to pound Judsou's face out of shape. lts last issue gives simdry reasons why its half eviscerated foe should not be appointed to the wardonship of the Jackson penitentiary. If Jud has tact enotigh to ache when he's hurt, he'd smile up, go over to Moran and take it '. all back, playfully pat the editor on the bread basket, invite him to come rouud and write vip his Poland-Chinas and Plymouth Rocks to the tune of $10.00, and try to re-establish that old time feeling when they always iissed when they met. Sel is game and his newspaper club keeps Jud dodging and on the run half the time. It better bc settled and that; suit diseontinued. Cramer, city editor of the Ann Arbor Times, went up to Chicago to boss the U. of M. fooball team last week and while away 'Geue Freatiff did the local grinding. 'Gene's first lunge was to prove by higher mathematics that $2.50 is enough to buy a Thanksgiving dinner for fonr persons, with a sufficientemargin left for all the cats and dogs on the place. He starts in with an 80 ceut turkey the amount to inclnde cranberries, and invoices the balance of the grnb as follows : Blue points, 20 cents; sonp, 80 cents; fish, 18 cents; celery, 5 cents; olives, 5 cents; potatoes, 10 cents; peas, lá cents; lettuce, 20 cents; pudding, 20 cents; coffee, 10 cents; cake, 20 cents. If the people, af ter getting into condition for the great feast day by fasting a week, were to be pinched down to 'Gene's limits, Thanksgiving would go to the wall iuside of two years.