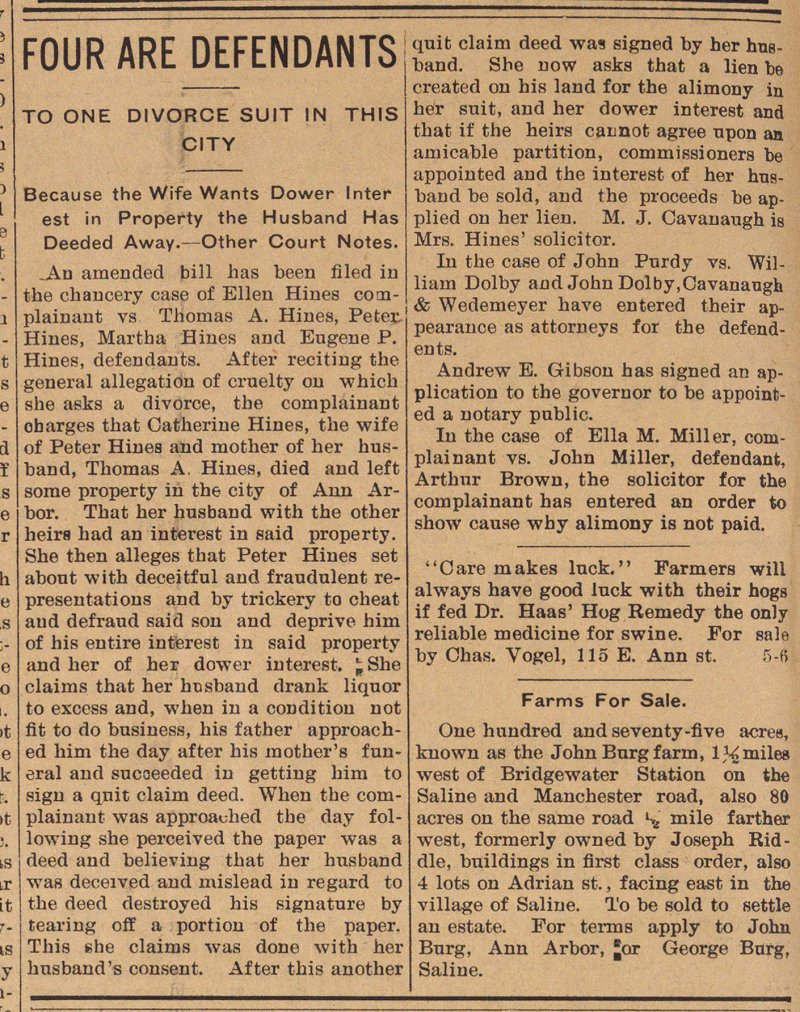 _An amended bilí has been filed in the chancery case of Ellen Hiñes complainant vs Thomas A. Hiñes, Peter. Hiñes, Martha Hiues and Eugene P. Hiñes, defendants. After reciting the general allegation of crnelty on which she asks a divorce, the complainant charges that Oatherine Hiñes, the wife of Peter Hiñes and mother of her husband, Thomas A. Hiñes, died and left some property in the city of Ann Arbor. That her husband with the other heirs had an interest in said property. She then alleges that Peter Hiñes set about with deceitful and fraudulent representations and by trickery to cheat and defraud said son and deprive him of his entire interest in said property and her of her dower interest. .She claims that her hnsband drank liquor to excess and, when in a condition not fit to do business, his father approached him the day after his mother's funeral and sucoeeded in getting him to sign a qnit claim deed. When the complainaut was approauhed the day following she perceived the paper was a deed and believing that her husband was deceived and mislead in regard to the deed destroyed his signature by tearing off a portion of the paper. This sbe claims was done with her husband 's consent. After this another quit claim deed was signed by her hnsband. She now asks that a lien be created on his land for the alimony in her suit, and her dower interest and that if the heirs caimot agree npon an ainicable partition, commissioners be appointed and the interest of her husband be sold, and the proceeds be applied on her lien. M. J. Cavanaugh is Mrs. Hines' solicitor. In the case of John Purdy vs. William Dolby and John Dolby, Cavanaugh & Wedemeyer have entered their appearance as attorneys for the defendents. Andrew E. Gibson has signed an application to the governor to be appointed a notary public. In the case of Ella M. Mili er, complainant vs. John Miller, defendant, Arthnr Brown, the solicitor for the complainant has entered an order to show cause why alimony is not paid.