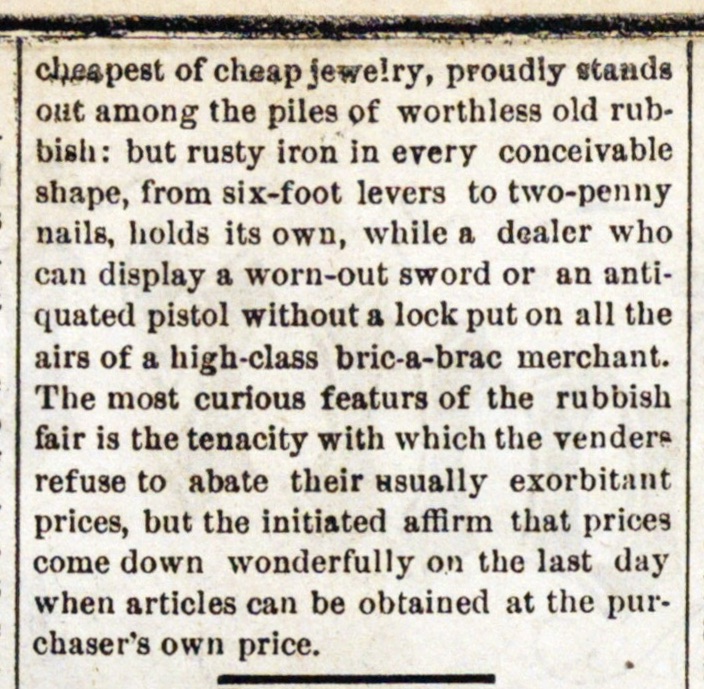 Paris, April 9, 1883. The old established Ham Pair, which, from time iiumemorial has delighted the good bourgeois of Paris during .Passion week, was held as usual on the Boulevard Richard Lenoir, between the Bastile and the Boulevard Voltaire. It would require a bom and bred charcutier to describe by their riglit names all the delicacies. having cnrpd pork for a basis, which hdorned the half mile or so of little wooden sheds that made up the famous Foire aux Jambons. Seeing that the fair has its origin in the dues paid to the Bishop and chapitre of Notre Dame de Paris, on i.nported swine flesh, and that during the week a rigid fast is imposed on all good Catholics, it is difflcult to imagine why this particular date should have been chosen for the sale of the least maigre of all ineaU. The secret of Ihisapparent anomaly is lost in the back pages of history. The present generation, especiully the inhabitants of the elevenlh arrondisment of Paris, accept tlieir Ham Fair with a good grace; and under the shadow of the great skeptic whose name adonis the handsome boulevard adjacent, rush to buy the succulent porcine meatoffered to them at what the venders cali the lowest prices everseeu orheard of. "Buy, buy, buy," ia the motto of the Ham Fair, whether the hamsbe from Wesphalia. the pork sausages from Bologna, or dricd 8ucking pigs, which, for all one knows may have been extracted from the pyramid of Cheops. Nor is pork the sole meat dispensed in every shape at the fair. Sausages of horseflesn, and donkey meat enclosed in shiny red skins, and smokcd sections of mule wcre displayed on handsome stalls,adorned with medalsand certificates of first prizes won at many an agricultural show. Qharcuterie hippophagique may have its devotee; certain it is that the establWiments which are compelled by law to announce the nature of their viands, but are not obliged to state exactly how gallant steeds and sure-footed donkeys carne to be transformed into sausage meat, are constantly surrounded by gaping throngsalways ready to taste, if not to purchase. At the northwestern extremity of Ham Fair is the animal mart for the disposal of every kind of worn-out old-fashioned. disused articles. which can only be classifled under the general appelatioii of rubbUh. What other name, indeed, would apply to an exbibition where rusty nails, horse-shoes, and battered-in kettles predomínate, and where secondhanU wooden legs, tarnisbed door-knobs, and Prussian helmets witli the spikes knocked off can be purchased by the dozen? The dealers in these heterogen eous wares do not, as a rule, "run to"stalls. Their goods are gpread out on the ground, paisers by being urgently requeited to turn over the heaps of rubbish in search of what they may happen to require. Here and there a rickety table, covered with the chsapest of chsapjewe'.ry, proudly tanda out among the piles pf worthles9 oíd rubbisli: but rusty ron in every conceivable sliape, from six-foot levers to two-penny nails, liolds its own, while a doalcr who can display a worn-out sword or an antiquated pistol without a Iockputon all tlie aira oí a high-class brica-brac merchant. Tlie most curíous featurs of the rubbish fair is the tenacity with which the vender refuse to abate their exorbitant prices, but the initiated afflrm that iricei come down wonderfully on tlie last day when articles eau be obtained at the purchaser's own price.