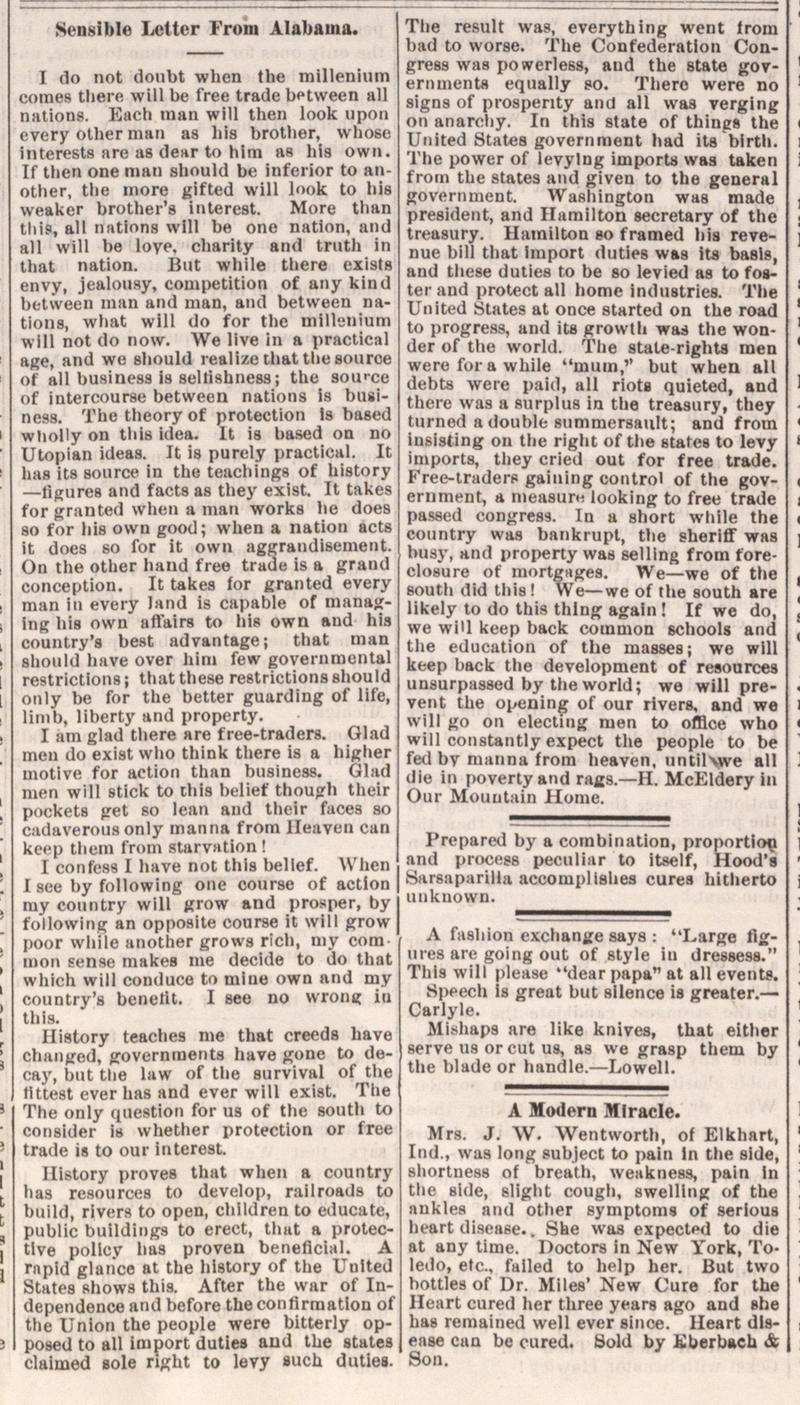 I do not doubt when the millenium comes there will be free trade between all nations. Each man will then look upon cvery other man as liis brother, wliose interests are as deur to hlm br bis own. If tben one man sbould be inferior to anotber, the more gifted will look to bis weaker brother's interest. More tban tlii?, all niitions will be one nation, and all will be loye, charity and trutb in tbat nation. But while there exista envy, jealonsy, competition of any kind between mnn and man, and between nations, what will do for the millenium will not do now. We live in a practical age, and wo should reali.e that the source OÍ all busines9 is sellishness; the sou-ce oí' intercourse between nations Is business. The theory oí protection is based wliolly on this idea, lt is based on do Utopian ideas. It is purcly practical. It lias its source in the teaching of history - ligares and facts as they exist. It takes for gran ted when a man works he does so for bis own good; when a nation acts it does so for it own aggrandisemeut. On the other hand free trade is a grand conception. It takes for granted every man in every land is capable of managIng liis own afl'airs to his own aud his country's best advantage; that man should have over him few goyernmental restrictioii8; that these restrictions should only be for the better guarding of life, linib, liberty and property. I am glad there are free-traders. Glad men do exist who think there is a higher motive for action than business. Glad men will stick to this belief thourh their pockets get so lean aud their faces so cadaverouj only manna f rom Heaven can keep tliem trom starvation ! I confesa I have not thls belief. When I see by following one course of action my country will grow and prosper, by following an opposite course it will grow poor while another grows rich, my com inciii nmc makes me decide to do that wliich will conduce to mine own and my country's benelit. I see no wrong in tllis. History teaches me that creeds have changed, governments have gone to decay, hut the law of the survival of the Htte8t ever has and ever will exist. The The only question for us of the south to consider is whether protection or free trade is to our interest. History provea that when a country has resources to develop, railroails to bulld, rivers to open, children to edúcate, public buildings to erect, that a protectlve pollcy bas proven beneficia!. A rnpld glaiico at the history of the United States shows this. After the war of Independence and before the confirmation of the Union the people were bitterly opposed to all import duties and the states claimed 8ole nght to levy such dutie. Tlie result was, everything went f rom bad to worse. The Confederation Congre8s was powerless, aud the state governmenU equally o. Tliero were no signs of prospenty and all was verging on anarcliy. In this state of thingg the United States go vern ment had its birth. The power of levylng imporU was taken I i-Din the states and given to the general government. Washington was made president, and Hamilton secretary of the treasury. Hamilton go framed li is revenuc bill t hut Import dnties was its basis, and these duties to be so levied as to fogterand protect all home industries. The United States at once started on the road to progresa, and iu growth was the wonder of the world. The stale-rights men were fora while "mum," but wuen all debts were paid, all riots quieted, and there was a surplus in the treasury, tliey turned a doublé summcrsaiilt; and from insisting on the right of the statca to levy imports, they cried out for free trade. Free-traders gaining control of the government, a mearan looking to free trade passed congress. In a short while the country was bankrupt, the sheriff was busy, and property was selllng from forecloBure of mortgnges. We - we of the south ilid this ! We - we of the south are likely to do this thlng again ! If we do, we wül keep back common schools and the cducai ion of the masses; we will keep back the development of resources unsurpassed by the world; we will prevent the opening of our rivers, and we will go on electing men to office who will constantly expect the people to be fed by manna from heaven, until ¦¦¦ all die in poverty and raus.- H. McEldery in Our Mouutnin Home. Prepared by a coinb'uiation, proportioj añil proccgs peculiar to itself, Hood's Sarsaparilla acconipl talies curea hitherto miknovvn. A fasliion excitante saya : "I,arge ñ%- ures are going out of style in dre8se98." Tliis will please "dear papa" at all eveiits. Speech is great but sllence is greater.- Carlyle. Mi-sliaps are like knirea, that eitlier serve lis or cut us, as we grasp tliem by