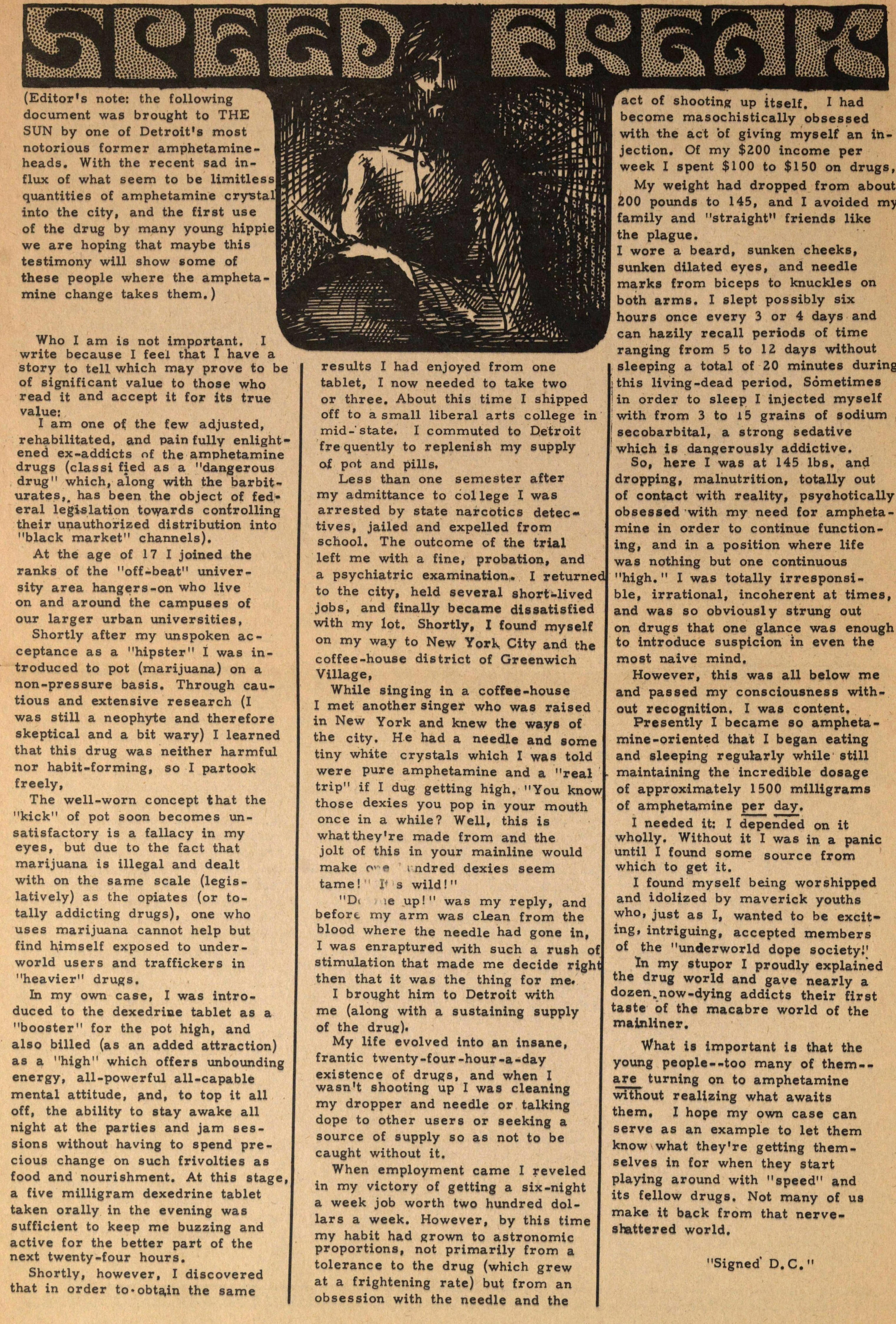 (Editor 's note: the following document was brought to THE SUN by one of Detroit's most notorious former amphetamine heads. With the recent sad influx of what seem to be limitless quantities of amphetamine crystal into the city, and the first use of the drug by many young hippie we are hoping that maybe this testimony will show some of these people where the amphetamine change takes them. )

Who I am is not important. I write because I feel that I have a story to tell which may prove to be of significant value to those who read it and accept it for its true value:

I am one of the few adjusted, rehabilitated, and painfully enlightened ex-addicts of the amphetamine drugs (classified as a "dangerous drug" which, along with the barbiturates, has been the object of federal legislation towards controlling their unauthorized distribution into "black market" channels).

At the age of 17 I joined the ranks of the "off-beat" university area hangers-on who live on and around the campuses of our larger urban universities.

Shortly after my unspoken acceptance as a "hipster" I was introduced to pot (marijuana) on a non-pressure basis. Through cautious and extensive research (I was still a neophyte and therefore skeptical and a bit wary) I learned that this drug was neither harmful nor habit-forming, so I partook freely.

The well-worn concept that the "kick" of pot soon becomes unsatisfactory is a fallacy in my eyes, but due to the fact that marijuana is illegal and dealt with on the same scale (legislatively) as the opiates (or totally addicting drugs), one who uses marijuana cannot help but find himself exposed to underworld users and traffickers in "heavier" drugs.

In my own case, I was introduced to the dexedrine tablet as a "booster" for the pot high, and also billed (as an added attraction) as a "high" which offers unbounding energy, all-powerful all-capable mental attitude, and, to top it all off, the ability to stay awake all night at the parties and jam sessions without having to spend precious change on such frivolties as food and nourishment. At this stage, a five milligram dexedrine tablet taken orally in the evening was sufficient to keep me buzzing and active for the better part of the next twenty-four hours.

Shortly, however, I discovered that in order to obtain the same results I had enjoyed from one tablet, I now needed to take two or three. About this time I shipped off to a small liberal arts college in mid-state. I commuted to Detroit frequently to replenish my supply of pot and pills.

Less than one semester after my admittance to college I was arrested by state narcotics detectives, jailed and expelled from school. The outcome of the trial left me with a fine, probation, and a psychiatric examination. I returned to the city, held several short-lived jobs, and finally became dissatisfied with my lot. Shortly, I found myself on my way to New York City and the coffee-house district of Greenwich Village.

While singing in a coffee-house I met another singer who was raised in New York and knew the ways of the city. He had a needle and some tiny white crystals which I was told were pure amphetamine and a "real trip" if I dug getting high. "You know those dexies you pop in your mouth once in a while? Well, this is what they're made from and the jolt of this in your mainline would make one hundred dexies seem tame! It's wild!"

"Do me up!" was my reply, and before my arm was clean from the blood where the needie had gone in, I was enraptured with such a rush of stimulation that made me decide right then that it was the thing for me.

I brought him to Detroit with me (along with a sustaining supply of the drug).

My life evolved into an insane, frantic twenty-four-hour-a-day existence of drugs, and when I wasn't shooting up I was cleaning my dropper and needie or talking dope to other users or seeking a source of supply so as not to be caught without it.

When employment came I reveled in my victory of getting a six-night a week job worth two hundred dollars a week. However, by this time my habit had grown to astronomic proportions, not primarily from a tolerance to the drug (which grew at a frightening rate) but from an obsession with the needle and the act of shooting up itself.

I had I become masochistically obsessed I with the act of giving myself an injection. Of my $200 income per I week I spent $100 to $150 on drugs.

My weight had dropped from about 200 pounds to 145, and I avoided my family and "straight" friends like the plague.

I wore a beard, sunken cheeks, sunken dilated eyes, and needle marks from biceps to knuckles on I both arms. I slept possibly six hours once every 3 or 4 days and can hazily recall periods of time ranging from 5 to 12 days without sleeping a total of 20 minutes during I this living-dead period, Sometimes in order to sleep I injected myself with from 3 to 15 grains of sodium secobarbital, a strong sedative which is dangerously addictive.

So, here I was at 145 lbs. and dropping, malnutrition, totally out of contact with reality, psychotically obsessed with my need for amphetamine in order to continue functioning, and in a position where life was nothing but one continuous "high." I was totally irresponsible, irrational, incoherent at times, and was so obviously strung out on drugs that one glance was enough to introduce suspicion in even the most naive mind.

However, this was all below me and passed my consciousness without recognition. I was content.

Presently I became so amphetamine-oriented that I began eating and sleeping regularly while still maintaining the incredible dosage of approximately 1500 milligrams of amphetamine per day.

I needed it: I depended on it wholly. Without it I was in a panic until I found some source from which to get it.

I found myself being worshipped and idolized by maverick youths who, just as I, wanted to be exciting, intriguing, accepted members of the "underworld dope society."

In my stupor I proudly explained the drug world and gave nearly a dozen, now-dying addicts their first taste of the macabre world of the mainliner.

What is important is that the young people - too many of them - are turning on to amphetamine without realizing what awaits them. I hope my own case can serve as an example to let them know what they're getting themselves in for when they start playing around with "speed" and its fellow drugs. Not many of us make it back from that nerve-shattered world.