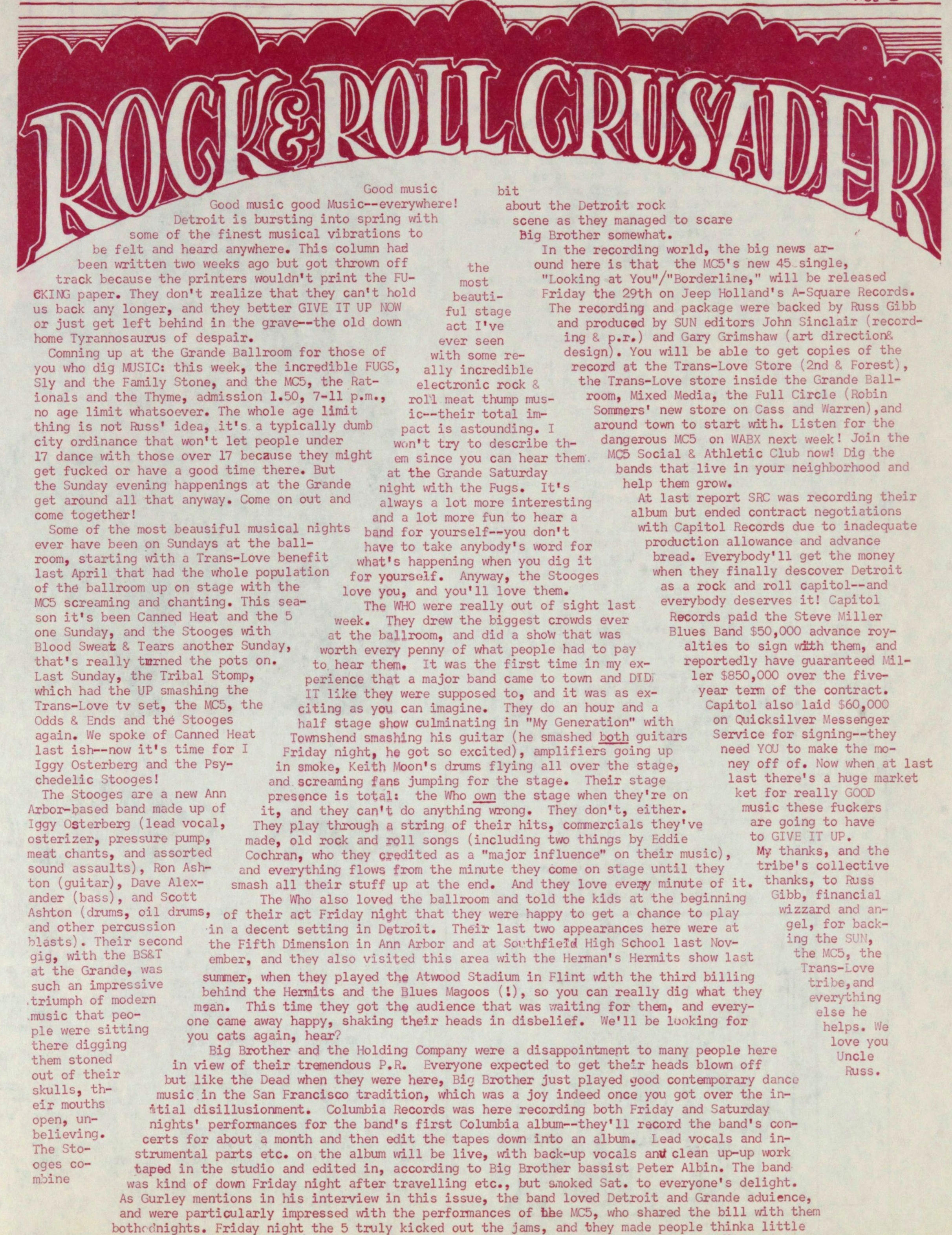 Good music good Music - everywhere! Detroit is bursting into spring with some of the finest musical vibrations to be felt and heard anywhere. This column had been written two weeks ago but got thrown off track because the printers wouldn't print the FUCKING paper. They don't realize that they can't hold us back any longer, and they better GIVE IT UP NOW or just get left behind in the grave--the old down home Tyrannosaurus of despair.

Coming up at the Grande Ballroom for those of you who dig MUSIC: this week, the incredible FUGS, Sly and the Family Stone, and the MC5, the Rationals and the Thyme, admission 1.50, 7-11 p.m., no age limit whatsoever. The whole age limit thing is not Russ' idea, it's a typically dumb city ordinance that won't let people under 17 dance with those over 17 because they might get fucked or have a good time there. But the Sunday evening happenings at the Grande get around all that anyway. Come on out and come together!

Some of the most beautiful musical nights ever have been on Sundays at the ballroom, starting with a Trans-Love benefit last April that had the whole population of the ballroom up on stage with the MC5 screaming and chanting. This season it's been Canned Heat and the 5 one Sunday, and the Stooges with Blood Sweat & Tears another Sunday, that's really turned the pots on. Last Sunday, the Tribal Stomp, which had the UP smashing the Trans-Love tv set, the MC5, the Odds & Ends and the Stooges again. We spoke of Canned Heat last ish--now it's time for Iggy Osterberg and the Psychedelic Stooges!

The Stooges are a new Ann Arbor-based band made up of Iggy Osterberg (lead vocal, osterizer, pressure pump, meat chants, and assorted sound assaults) , Ron Ashton (guitar), Dave Alexander (bass), and Scott Ashton (drums, oil drums, and other percussion blasts) . Their second gig, with the BS&T at the Grande, was such an impressive triumph of modern music that people were sitting there digging them stoned out of their skulls, their mouths open, unbelieving. The Stooges combine the most beautiful stage act I've ever seen with some really incredible electronic rock & roll meat thump music--their total impact is astounding. I won't try to describe them since you can hear them at the Grande Saturday night with the Fugs. It's always a lot more interesting and a lot more fun to hear a band for yourself - you don't have to take anybody's word for what's happening when you dig it for yourself. Anyway, the Stooges love you, and you'll love them.

The WHO were really out of sight last week. They drew the biggest crowds ever at the ballroom, and did a show that was worth every penny of what people had to pay to hear them. It was the first time in my experience that a major band came to town and DID IT like they were supposed to, and it was as exciting as you can imagine. They do an hour and a half stage show culminating in "My Generation" with Townshend smashing his guitar (he smashed both guitars Friday night, he got so excited) , amplifiers going up in smoke, Keith Moon's drums flying all over the stage, and screaming fans jumping for the stage. Their stage presence is total: the Who own the stage when they're on it, and they can't do anything wrong. They don't, either. They play through a string of their hits, commercials they've made, old rock and roll songs (including two things by Eddie Cochran, who they credited as a "major influence" on their music) , and everything flows from the minute they come on stage until they smash all their stuff up at the end. And they love every minute of it.

The Who also loved the ballroom and told the kids at the beginning of their act Friday night that they were happy to get a chance to play in a decent setting in Detroit. Their last two appearances here were at the Fifth Dimension in Ann Arbor and at Southfield High School last November, and they also visited this area with the Herman' s Hermits show last summer, when they played the Atwood Stadium in Flint with the third billing behind the Hermits and the Blues Magoos (!), so you can really dig what they mean. This time they got the audience that was waiting for them, and everyone carne away happy, shaking their heads in disbelief. We'll be looking for you cats again, hear?

Big Brother and the Holding Company were a disappointment to many people here in view of their tremendous P.R. Everyone expected to get their heads blown off but like the Dead when they were here, Big Brother just played good contemporary dance music in the San Francisco tradition, which was a joy indeed once you got over the initial disillusionment. Columbia Records was here recording both Friday and Saturday nights' performances for the band's first Columbia album - they'll record the band's concerts for about a month and then edit the tapes down into an album. Lead vocals and instrumental parts etc. on the album will be live, with back-up vocals and clean up-up work taped in the studio and edited in, according to Big Brother bassist Peter Albin. The band was kind of down Friday night after traveling etc., but smoked Sat. to everyone's delight. As Gurley mentions in his interview in this issue, the band loved Detroit and Grande audience, and were particularly impressed with the performances of the MC5, who shared the bill with them both nights. Friday night the 5 truly kicked out the jams, and they made people thinka little bit about the Detroit rock scene as they managed to scare Big Brother somewhat.

In the recording world, the big news around here is that the MC5's new 45 single, "Looking at You"/"Borderline," will be released Friday the 29th on Jeep Holland's A-Square Records. The recording and package were backed by Russ Gibb and produced by SUN editors John Sinclair (recording & p.r.) and Gary Grimshaw (art direction& design) . You will be able to get copies of the record at the Trans-Love Store (2nd & Forest) , the Trans-Love store inside the Grande room, Mixed Media, the Full Circle (Robin Soraners' new store on Cass and Warren), and around town to start with. Listen for the dangerous MC5 on WABX next week! Join the MC5 Social & Athletic Club now! Dig the bands that live in your neighborhood and help them grow.

At last report SRC was recording their album but ended contract negotiations with Capitol Records due to inadequate production allowance and advance bread. Everybody'll get the money when they finally discover Detroit as a rock and roll capítol - and everybody deserves it! Capitol Records paid the Steve Miller Blues Band $50,000 advance royalties to sign with them, and reportedly have guaranteed Miller $850,000 over the five year term of the contract. Capitol also laid $60,000 on Quicksilver Messenger Service for signing - they need YOU to make the money off of. Now when at last last there's a huge market for really GOOD music these fuckers are going to have to GIVE IT UP. My thanks, and the tribe's collective thanks, to Russ Gibb, financial wizzard and angel, tor backing the SUN, the MC5, the Trans-Love tribe, and everything else he helps. We love you Uncle Russ.