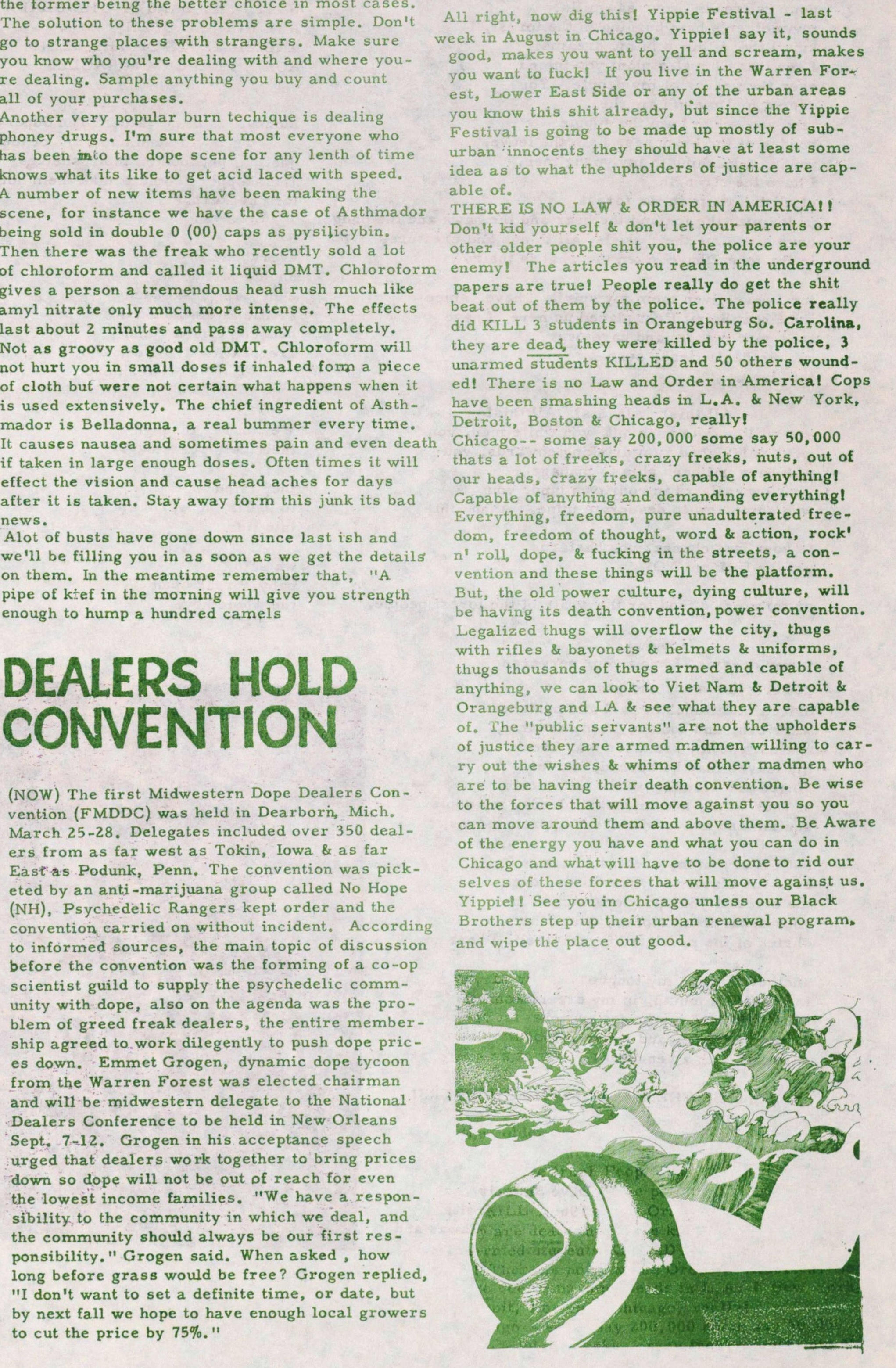 (NOW) The first Midwestern Dope Dealers Convention (FMDDC) was held in Dearborn, Mich. March 25-28. Delegates included over 350 dealers from as far west at Tokin, Iowa & as far East as Podunk, Penn. The convention was picketed by an anti-marijuana group called No Hope (NH), Psychedelic Rangers kept order and the convention carried on without incident. According to informed sources, the main topic of discussion before the convention was the forming of a co-op scientist guild to supply the psychedelic community with dope, also on the agenda was the problem of greed freak dealers, the entire membership agreed to work diligently to push dope prices down. Emmet Grogen, dynamic dope tycoon from the Warren Forest was elected chairman and will be midwestern delegate to the National Dealers Conference to be held in New Orleans Sept. 7-12. Grogen in his acceptance speech urged that dealers work together to bring prices down so dope will not be out of reach for even the lowest income families. "We have a responsibility to the community should always be our first responsibility." Grogen said. When asked, how long before grass would be free? Grogen replied "I don't want to set a definite time, or date, but by next fall we hope to have enough local growers to cut the price by 75%."

All right, now dig this! Yippie Festival- last week in August in Chicago. Yippie!  sounds good, makes you want to yell and scream, makes you want to fuck! If you live in the Warren Forest, Lower East Side or any of the urban areas, you know this shit already, but since the Yippie Festival is going to be made up most of urban innocents they should have at least some idea as to what the upholders of justice are capable of.

THERE IS NO LAW & ORDER IN AMERICA!! Don't kid yourself & don't let your parents or other older people shit you, the police are your enemy! The articles you read in the underground papers are true! People really do get the shit beat out of them by the police. The police really did KILL 3 students in Orangeburg, So. Carolina. They are dead, they were killed by the police. 3 unarmed students KILLED and 50 others wounded! There is no Law and Order in America! Cops have been smashing heads in L.A. & New York, Detroit, Boston, & Chicago, really! Chicago--some say 200,000 some say 50,000. That's a lot of freeks, crazy freeks, nuts, out of our heads, crazy freeks, capable of anything! Capable of anything and demanding everything. Everything, freedom, pure unadulterated freedom, freedom of thought, word & action, rock n' roll, dope & fucking in the streets, intervention and these things will the platform. But, the old power culture, dying culture, will be having its death convention power convention. Legalized thugs will overflow the city, armed with rifles and bayonets & helmets & uniforms, thugs thousands of thugs armed  and capable of anything, we can look to Viet Nam & Detroit & Orangeburg and LA & see what they are capable of. The "public servants" are  not the upholders of justice they are armed madmen will carry out the wishes & whims of other madmen who are to be having their death convention. Be wise to the forces that will move against you so you can move around them and above them. Be aware of the energy you have and what you can do in Chicago and what will have to be done to rid ourselves  of the these forces that will move against us. Yippie! See you in Chicago unless our Black Brothers step up their urban renewal and wipe the place out good.