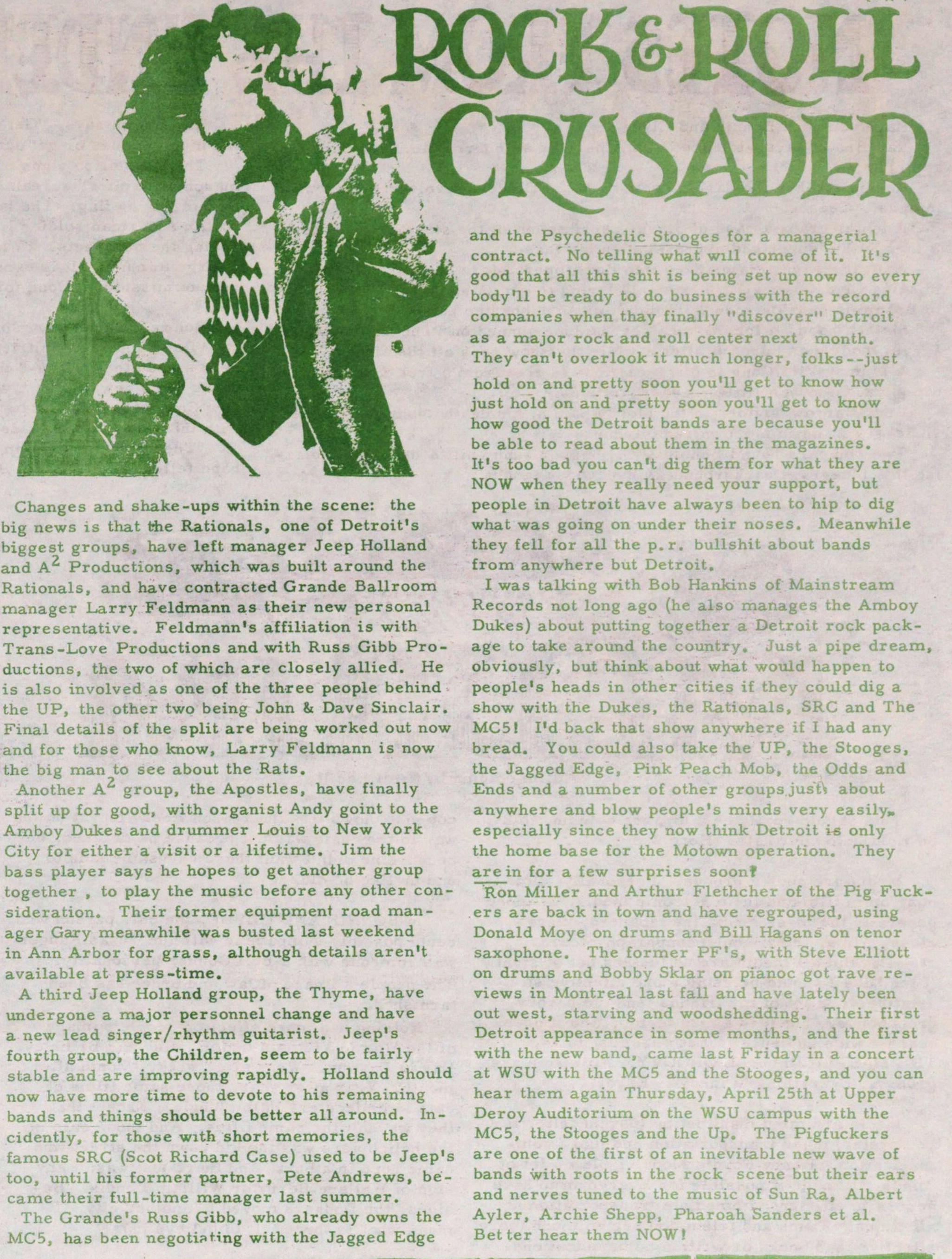 Changes and shake -ups within the scène: the big news is that the Rationals, one oL Detroit's biggest groups, have left manager Jeep Holland and A2 Productions, which was built around the Rationals, and have contracted Grande Ballroom manager Larry Feldmann as their new personal representative. Feldmann's affiliation is with Trans-Love Productions and with Russ Gibb Productions, the two of which are closely allied. He is also involved as one of the three people behind the UP, the other two being John & Dave Sinclair. Final details of the split are being worked out now and for those who know, Larry Feldmann is now the big man to see about the Rats. Another A2 group, the Apostles, have finally split up for good, with organist Andy goint to the Amboy Dukes and drummer Louis to New York City for either a visit or a lifetime. Jim the bass player says he hopes to get another group together , to play the music before any other consideration. Their tormer equipment road manager Gary meanwhile was busted last weekend in Ann Arbor for grass, although details aren't available at press-time. A third Jeep Holland group, the Thyme, have undergone a major personnel change and have a new lead singerrhythm guitarist. Jeep's fourth group, the Children, seem to be fairly stable and are improving rapidly. Holland should now have more time to devote to his remaining bands and things should be better all around. Incidently, for those with short memories, the famous SRC (Scot Richard Case) used to be Jeep's too, until his former partner, Pete Andrews, bécame their full-time manager last summer. The Grande's Russ Gibb, who already owns the MC5, has been negotiaHng with the Jagged Edge and the Psychedelic Stooges for a managerial contract. No telling what will come of ït. It's good that all this shit is being set up now so every body'll be ready to do business with the record companies when thay finally "discover" Detroit as a major rock and roll center next month. They can't overlook it much longer, folks--just hold on and pretty soon you'll get to know how just hold on and pretty soon you'll get to know how good the Detroit bands are because you'll be able to read about them in the magazines. It's too bad you can't dig them for what they are NOW when they really need your support, but people in Detroit have always been to hip to dig what was going on under their noses. Meanwhile they feil for all the p.r. bullshit about bands f rom anywhere but Detroit. I was talking with Bob Hankins of Mainstream Records not long ago (he also manages the Amboy Dukes) about putting together a Detroit rock package to take around the country. Just a pipe dream, obviously, but think about what would happen to people's heads in other cities if they could dig a show with the Dukes, the Rationals, SRC and The MC5! I'd back that show anywhere if I had any bread. You could also take the UP, the Stooges, the Jagged Edge, Pink Peach Mob, the Odds and Ends and a number of other groups jus"t about anywhere and blow people's minds very easily especially since they now think Detroit is only the home base for the Motown operation. They are in for a few surprises soont Ron Miller and Arthur Flethcher of the Pig Fuckers are back in town and have regrouped, using Donald Moye on drums and Bill Hagans on tenor saxophone. The former PF's, with Steve Elliott on drums and Bobby Sklar on pianoc got rave reviews in Montreal last fall and have lately been out west, starving and woodshedding. Their first Detroit appearance in some months, and the first with the new band, carne last Friday in a concert at WSU with the MC5 and the Stooges, and you can hear them again Thursday, April 25th at Upper Deroy Auditorium on the WSU campus with the MC5, the Stooges and the Up. The Pigfuckers are one of the first of an inevitable new wave of bands with roots in the rock scène but their ears and nerves tuned to the music of Sun Ra, Albert Ayler, Archie Shepp, Pharoah Sanders et al. Bet ter hear them NOW!