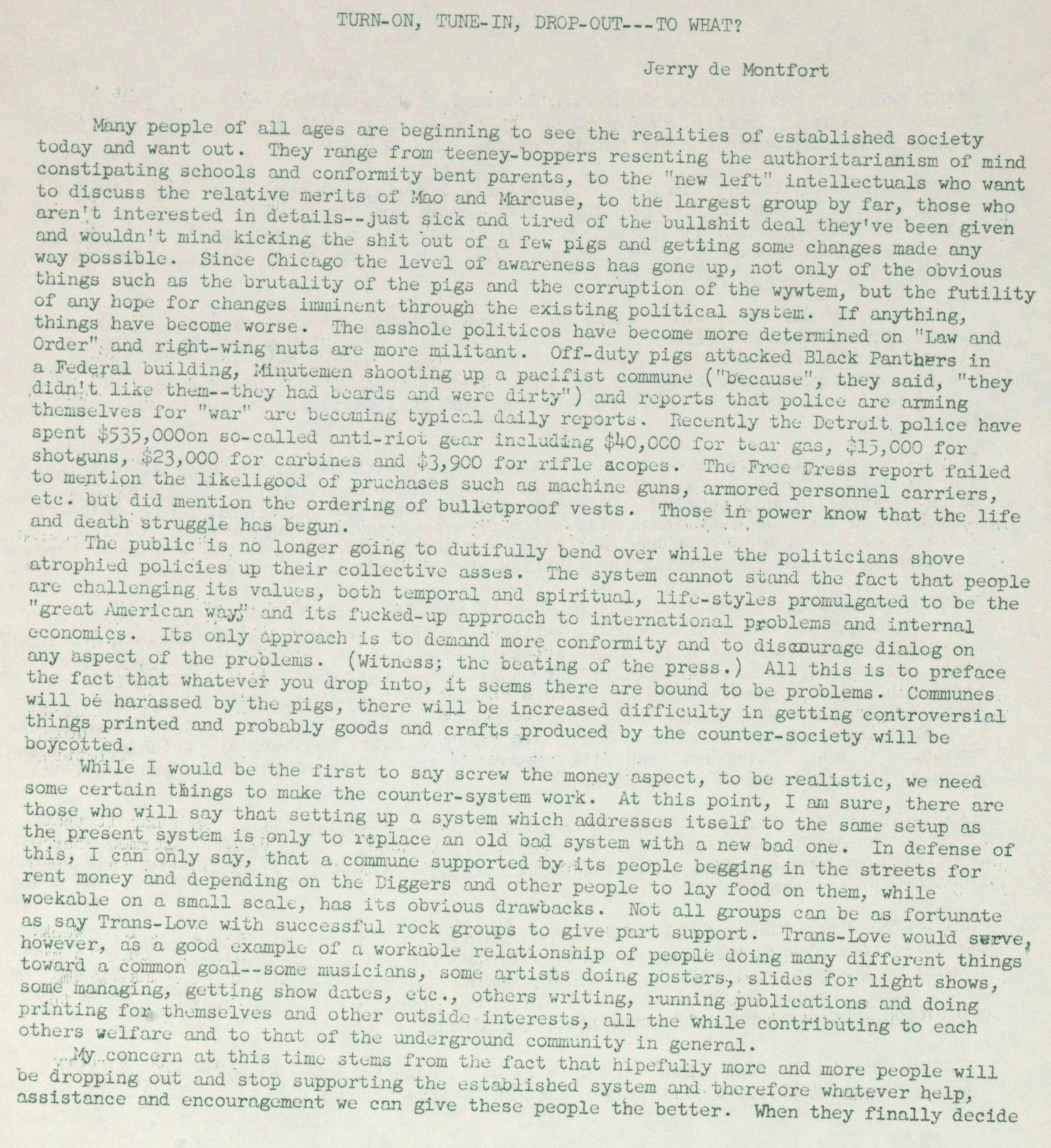 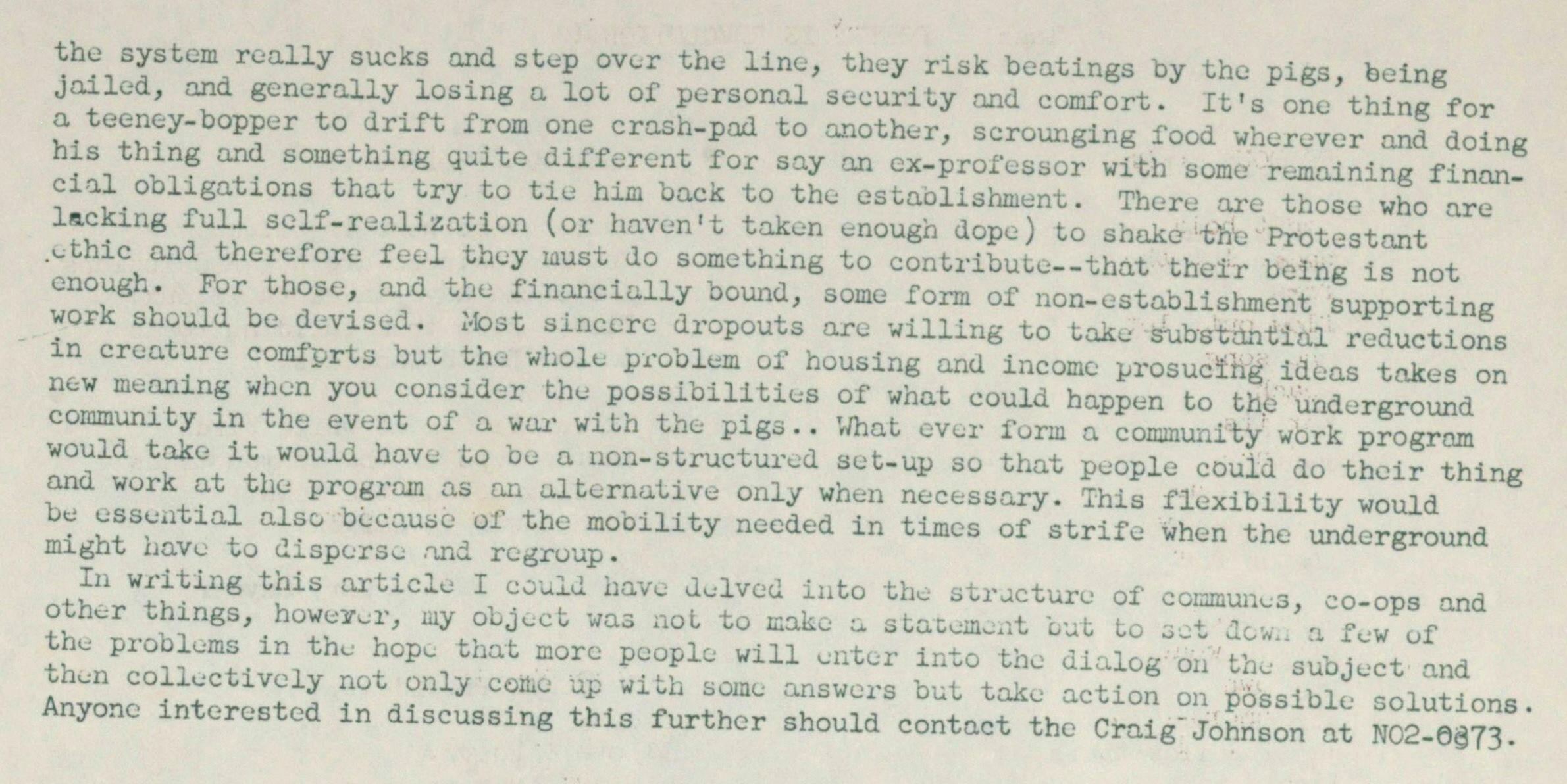 Many people of all ages are beginning to see the realities of established society today and want out. They range from teeney-boppers resenting the authoritarianism of mind constipating schools and conformity bent parents, to the "new left" intellectuals who want to discuss the relative merits of Mao and Marcuse, to the largest group by far, those who aren't interested in details--just sick and tired of the bullshit deal they've been given and wouldn't mind kicking the shit out of a few pigs and getting some changes made any way possible. Since Chicago the level of awareness has gone up, not only of the obvious things such as the brutality of the pigs and the corruption of the wywtem, but the futility of any hope for changes imminent through the existing political system. If anything, things have become worse. The asshole politicos have become more determined on "Law and Order" and right-wing nuts are more militant. Off-duty pigs attacked Black Panthers in a Federal building, Minutemen shooting up a pacifist commune ("because", they said, "they didn't like them--they had beards and were dirty") and reports that police are arming themselves for "war" are becoming typical daily reports. Recently the Detroit police have spent $23,000 for carbines and $3,900 for rifle scopes. The Free Press report failed to mention the likelihood of purchases such as machine guns, armored personnel carriers, etc. but did mention the ordering of bulletproof vests. Those in power know that the life and death struggle has begun.

The public is no longer going to dutifully bend over while the politicians shove atrophied policies up their collective asses. The system cannot stand the fact that people are challenging its values, both temporal and spiritual, life-styles promulgated to be the great American way, and its fucked-up approach to international problems and internal economics. Its only approach is to demand more conformity and to discourage dialog on the fact that whatever you drop into, it seems there are bound to be problems. Communes will be harassed by the pigs, there will be increased difficulty in getting controversial things printed and probably goods and crafts produced by the counter-society will be boycotted.

While I would be the first to say screw the money aspect, to be realistic, we need some certain things to make the counter-system work. At this point, I am sure, there are those who will say that setting up a system which addresses itself to the same setup as the present system is only to replace an old bad system with a new bad one. In defense of this, I can only say, that a commune supported by its people begging in the streets for rent money and depending on the Diggers and other people to lay food on them, while workable on a small scale, has its obvious drawbacks. Not all groups can be as fortunate as say Trans-Love with successful rock groups to give part support. Trans-Love would serve, however, as a good example of a workable relationship of people doing many different things toward a common goal--some musicians, some artists doing posters, slides for light shows, some managing, getting show dates, etc., others writing, running publications and doing printing for themselves and other outside interests, all the while contributing to each others welfare and to that of the underground community in general.

My concern at this time stems from the fact that hopefully more and more people will be dropping out and stop supporting the established system and therefore whatever help, assistance and encouragement we can give these people the better. When they finally decide