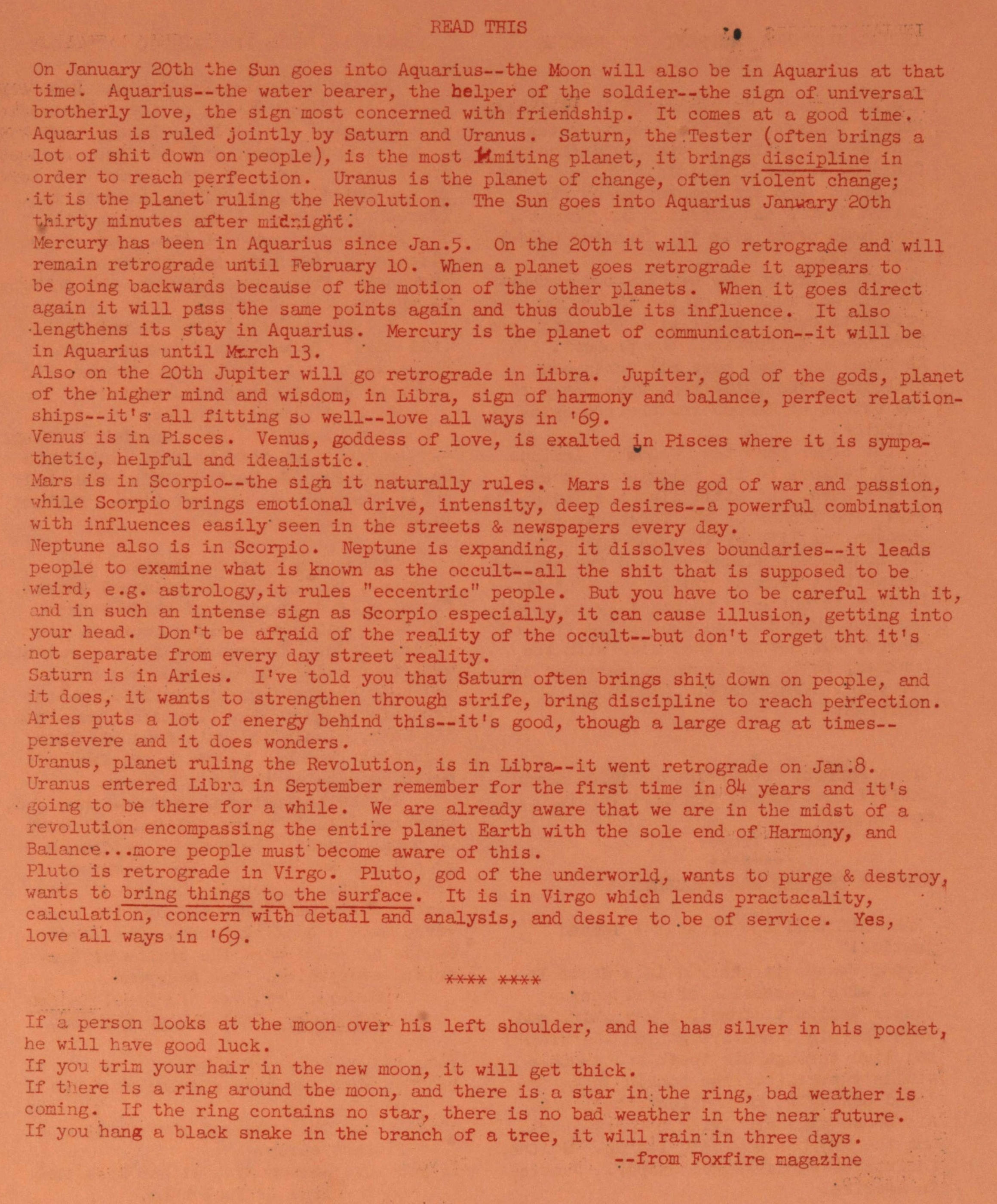 On January 20th the Sun goes into Aquarius--the Moon will also be in Aquarius at that time. Aquarius--the water bearer, the helper of the soldier--the sign of universal brotherly love, the sign most concerned with friendship. It comes at a good time. Aquarius is ruled jointly by Saturn and Uranus. Saturn, the Tester (often brings a lot of shit down on people), is the most limiting planet, it brings discipline in order to reach perfection. Uranus is the planet of change, often violent change; it is the planet ruling the Revolution. The Sun goes into Aquarius January 20th thirty minutes after midnight.

Mercury has been in Aquarius since Jan. 5. On the 20th it will go retrograde and will remain retrograde until February 10. When a planet goes retrograde it appears to be going backwards because of the motion of the other planets. When it goes direct again it will pass the same points again and thus double its influence. It also lengthens its stay in Aquarius. Mercury is the planet of communication--it will be in Aquarius until March 13.

Also on the 20th Jupiter will go retrograde in Libra. Jupiter, god of the gods, planet of the higher mind and wisdom, in Libra, sign of harmony and balance, perfect relationships--it's all fitting so well--love all ways in '69.

Venus is in Pisces. Venus, goddess of love, is exalted in Pisces where it is sympathetic, helpful, and idealistic.

Mars is in Scorpio--the sign it naturally rules. Mars is the god of war and passion, while Scorpio brings emotional drive, intensity, deep desires--a powerful combination with influences easily seen in the streets & newspapers every day.

Neptune also is in Scorpio. Neptune is expanding, it dissolves boundaries--it leads people to examine what is known as the occult--all the shit that is supposed to be weird, e.g. astrology, it rules "eccentric" people. But you have to be careful with it, and in such an intense sign as Scorpio especially, it can cause illusion, getting into your head. Don't be afraid of the reality of the occult--but don't forget that it's not separate from every day street reality.

Saturn is in Aries. I've told you that Saturn often brings shit down on people, and it does, it wants to strengthen through strife, bring discipline to reach perfection. Aries puts a lot of energy behind this--it's good, though a large drag at times--persevere and it does wonders.

Uranus, planet ruling the Revolution, is in Libra--it went retrograde on Jan. 8. Uranus entered Libra in September remember for the first time in 84 years and it's going to be there for a while. We are already aware that we are in the midst of a revolution encompassing the entire planet Earth with the sole end of Harmony, and Balance...more people must become aware of this.

Pluto is retrograde in Virgo. Pluto, god of the underworld, wants to purge & destroy, wants to bring things to the surface. It is in Virgo which lends practicality, calculation, concern with detail and analysis, and desire to be of service, Yes, love all ways in '69.

If a person looks at the moon over his left shoulder, and he has silver in his pocket, he will have good luck.

If you trim your hail in the new moon, it will get thick.

If you hand a black snake in the branch of a tree, it will rain in three days.