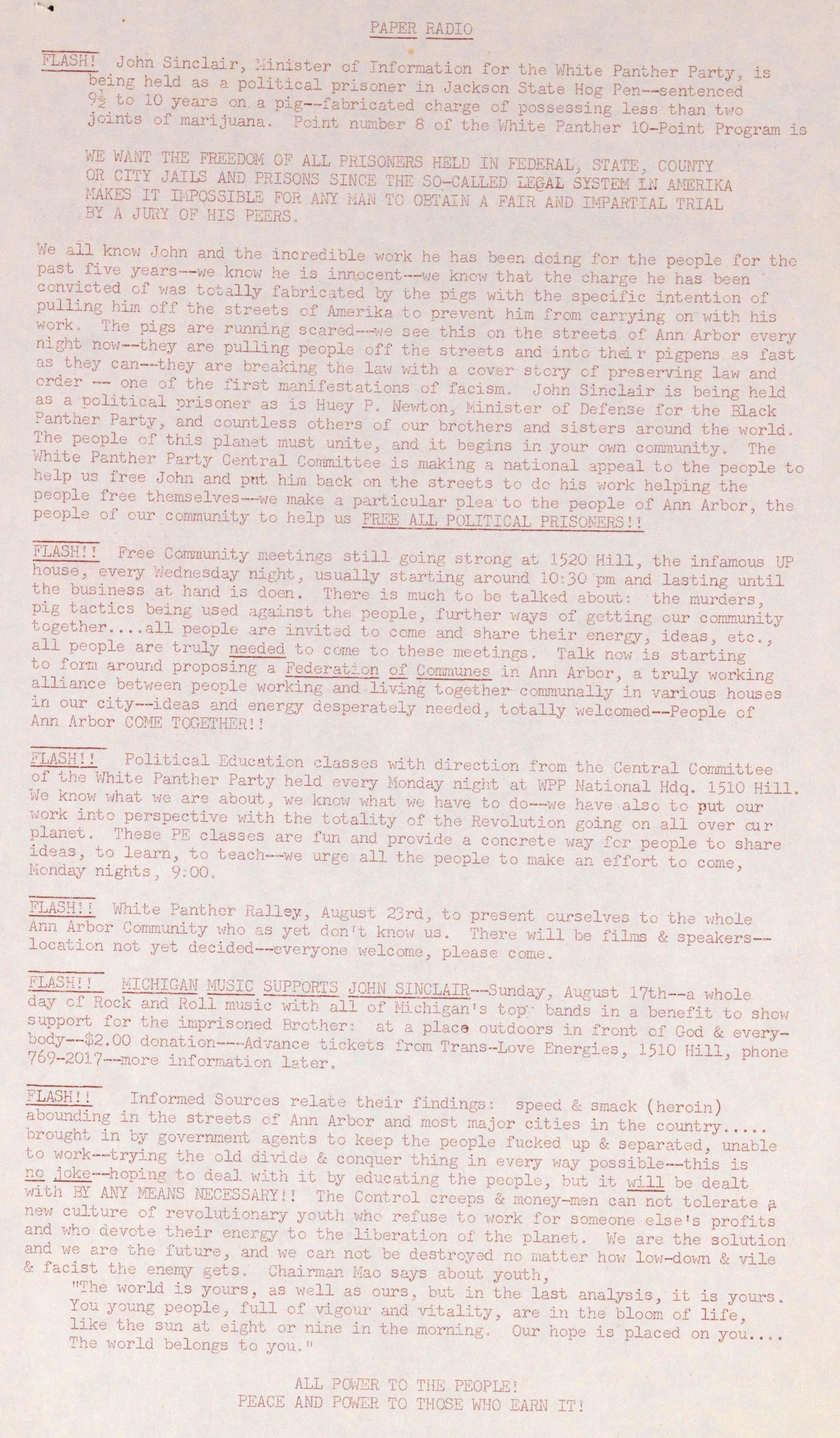 FLASH!  John Sinclair, Minister of Information for the White Panther Party, is being held as a political prisoner in Jackson State Hog Pen -- sentenced 9 1/2 to 10 years on a pig--fabricated charge of possessing less than two joints of marijuana. Point number 8 of the White Panther 10-point Program is

WE WANT THE FREEDOM OF ALL PRISONERS HELD IN FEDERAL, STATE, COUNTY OR CITY JAILS AND PRISONS SINCE THE SO-CALLED LEGAL SYSTEM IN AMERIKA MAKES IT IMPOSSIBLE FOR ANY MAN TO OBTAIN A FAIR AND IMPARTIAL TRIAL BY A JURY OF HIS PEERS.

We all know John and the incredible work he has been doing for the people for the past five years -- we know he is innocent -- we know that the charge he has been convicted of was totally fabricated by the pigs with the specific intention of pulling him off the streets of Amerika to prevent him from carrying on with his work. The pigs are running scared -- we see this on the streets of Ann Arbor every night now -- they are breaking the law with a cover story of preserving law and order -- one of the first manifestations of facism. John Sinclair is being held as a political prisoner as is Huey P. Newton, Minister of Defense for the Black Panther Party, and countless others of our brothers and sisters around the world. The people of this planet must unite, and it begins in your own community. The White Panther Party Central Committee is making a national appeal to the people to help us free John and put him back on the streets to do his work helping the people free themselves -- we make a particular plea to the people of Ann Arbor, the people of our community to help us FREE ALL POLITICAL PRISONERS!!

FLASH!!  Free Community meetings still going strong at 1520 Hill, the infamous UP house, every Wednesday night, usually starting around 10:30 pm and lasting until the business at hand is doen. There is much to be talked about: the murders, pig tactics being used against the people, further ways of getting our community together....all people are invited to come and share their energy, ideas, etc., all people are truly needed to come to these meetings. Talk now is starting to form around proposing a Federation of Communes in Ann Arbor, a truly working alliance between people working and living together communally in various houses in our city -- ideas and energy desperately needed, totally welcomed -- People of Ann Arbor COME TOGETHER!!

FLASH!!  Political Education classes with direction from the Central Committee of the White Panther Party held every Monday night at WPP National Hdq. 1510 Hill. We know what he are about, we know what we have to do -- we have also to put our work into perspective with the totality of the Revolution going on all over our planet. These PE classes are fun and provide a concrete way for people to share ideas, to learn, to teach -- we urge all the people to make an effort to come, Monday nights, 9:00.

FLASH!! White Panther Ralley, August 23rd, to present ourselves to the whole Ann Arbor Community who as yet don't know us. There will be films & speakers -- location not yet decided -- everyone welcome, please come.

FLASH!! MICHIGAN MUSIC SUPPORTS JOHN SINCLAIR -- Sunday, August 17th -- a whole day of Rock and Roll music with all of Michigan's top bands in a benefit to show support for the imprisoned Brother: at a place outdoors in front of God & everybody -- $2.00 donation -- Advance tickets from Trans-Love Energies, 1510 Hill, phone 769-2017 -- more information later.

FLASH!! Informed Sources relate their findings: speed & smack (heroin) abounding in the streets of Ann Arbor and most major cities in the country..... brought in by government agents to keep the people fucked up & separated, unable to work -- trying the old divide & conquer thing in every way possible -- this is no joke -- hoping to deal with it by educating the people, but it will be dealt with BY ANY MEANS NECESSARY!! The Control creeps & money-men can not tolerate a new culture of revolutionary youth who refuse to work for someone else's profits and who devote their energy to the liberation of the planet. We are the solution and we are the future, and we can not be destroyed no matter how low-down & vile & facist the enemy gets. Chairman Mao says about youth,

"The world is yours, as well as ours, but in the last analysis, it is yours. You young people, full of vigour and vitality, are in the bloom of life, like the sun at eight or nine in the morning. Our hope is placed on you.... The world belongs to you."

PEACE AND PPOWER TO THOSE WHO EARN IT!