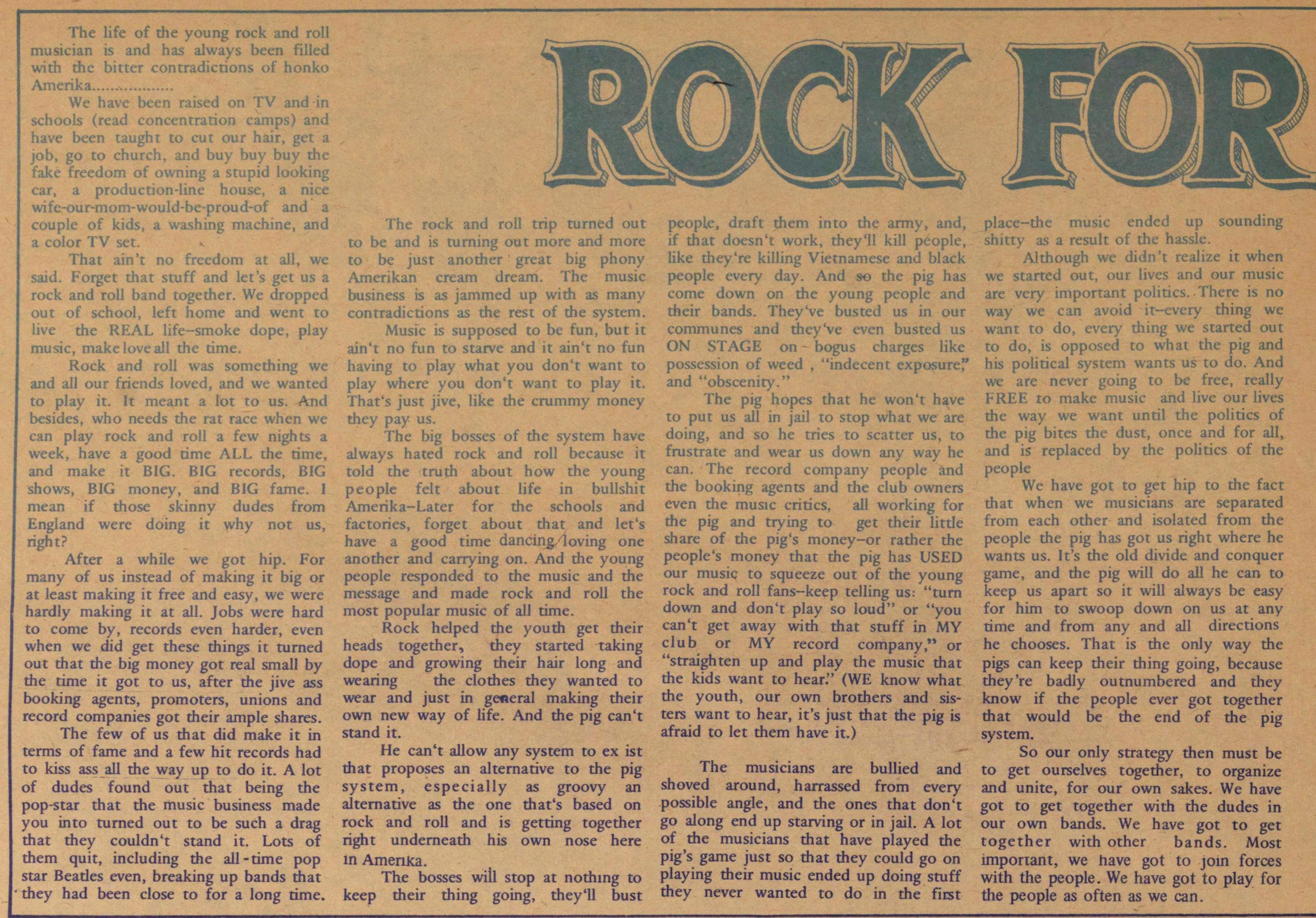 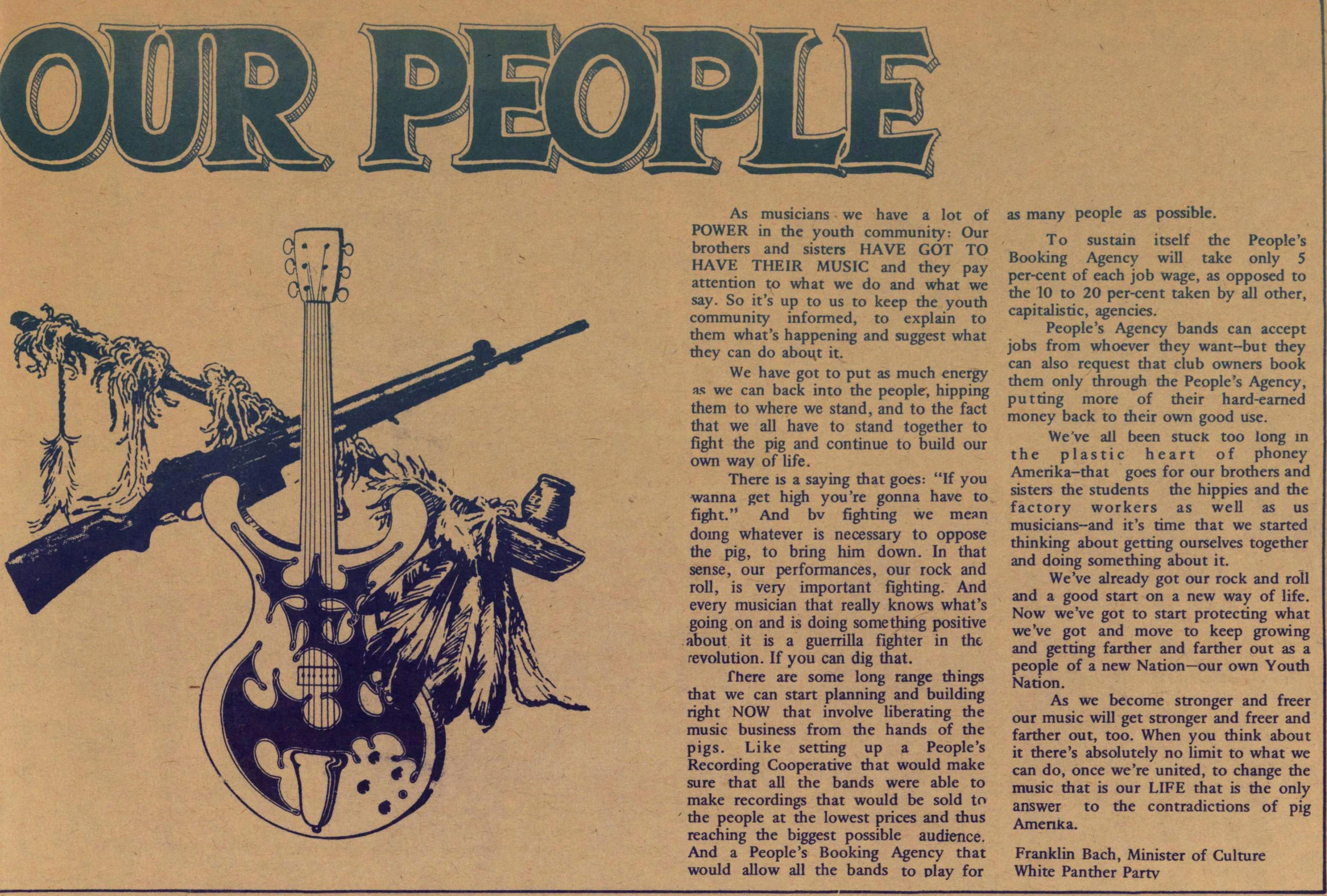 The life of the young rock and roll musician is and has always been filled with the bitter contradictions of honko Amerika.................

We have been raised on TV and in schools (read concentration camps) and have been taught to cut our hair, get a job, go to church, and buy buy buy the fake freedom of owning a stupid looking car, a production-line house, a nice wife-our-mom-would-be-proud-of and a couple of kids, a washing machine, and a color TV set.

That ain't no freedom at all, we said. Forget that stuff and let 's get us a rock and roll band together. We dropped out of school, left home and went to live the REAL life-smoke dope, play music, make love all the time.

Rock and roll was something we and all our friends loved, and we wanted to play it. It meant a lot to us. And besides, who needs the rat race when we can play rock and roll a few nights a week, have a good time ALL the time, and make it BIG. BIG records, BIG shows, BIG money, and BIG fame. I mean if those skinny dudes from England were doing it why not us, right?

After a while we got hip. For many of us instead of making it big or at least making it free and easy, we were hardly making it at all. Jobs were hard to come by, records even harder, even when we did get these things it turned out that the big money got real small by the time it got to us, after the jive ass booking agents, promoters, unions and record companies got their ample shares.

The few of us that did make it in terms of fame and a few hit records had to kiss ass all the way up to do it. A lot of dudes found out that being the pop-star that the music business made you into turned out to be such a drag that they couldn't stand it. Lots of them quit, including the all-time pop star Beatles even, breaking up bands that they had been close to for a long time.

The rock and roll trip turned out to be and is turning out more and more to be just another great big phony . Amerikan cream dream. The music business is as jammed up with as many contradictions as the rest of the system.

The big bosses of the system have always hated rock and roll because it told the truth about how the young people felt about life in bullshit Amerika-Later for the schools and factories, forget about that and let's have a good time dancing loving one another and carrying on. And the young people responded to the music and the message and made rock and roll the most popular music of all time.

Rock helped the youth get their heads together, they started taking dope and growing their hair long and wearing the clothes they wanted to wear and just in general making their own new way of life. And the pig can't stand it.

He can't allow any system to exist that proposes an alternative to the pig system, especially as groovy an alternative as the one that's based on rock and roll and is getting together right underneath his own nose here in Amerika.

The bosses will stop at nothing to keep their thing going, they'll bust people, draft them into the army, and, if that doesn't work, they'll kill people, like they're killing Vietnamese and black people every day. And so the pig has come down on the young people and their bands. They've busted us in our communes and they've even busted us ON STAGE on - bogus charges like possession of weed , "indecent exposure" and "obscenity."

The pig hopes that he won 't have to put us all in jail to stop what we are doing, and so he tries to scatter us, to frustrate and wear us down any way he can. The record company people and the booking agents and the club owners even the music critics, all working for the pig and trying to get their little share of the pig's money-or rather the people's money that the pig has USED our music to squeeze out of the young rock and roll fans-keep telling us: "turn down and don't play so loud" or "you can't get away with that stuff in MY club or MY record company," or "straighten up and play the music that the kids want to hear." (WE know what the youth, our own brothers and sisters want to hear, it's just that the pig is afraid to let them have it.)

The musicians are bullied and shoved around, harassed from every possible angle, and the ones that don't go along end up starving or in jail. A lot of the musicians that have played the pig's game just so that they could go on playing their music ended up doing stuff they never wanted to do in the first place-the music ended up sounding shitty as a result of the hassle.

Although we didn't realize it when we started out, our lives and our music are very important politics. There is no way we can avoid it-every thing we want to do, every thing we started out to do, is opposed to what the pig and his political system wants us to do. And we are never going to be free, really FREE to make music and live our lives the way we want until the politics of the pig bites the dust, once and for all, and is replaced by the politics of the people.

We have got to get hip to the fact that when we musicians are separated from each other and isolated from the people the pig has got us right where he wants us. It's the old divide and conquer game, and the pig will do all he can to keep us apart so it will always be easy for him to swoop down on us at any time and from any and all directions he chooses. That is the only way the pigs can keep their thing going, because they're badly outnumbered and they know if the people ever got together that would be the end of the pig system.

As musicians we have a lot of POWER n the youth community: Our brothers and sisters HAVE GOT TO HAVE THEIR MUSIC and they pay attention to what we do and what we say. So it's up to us to keep the youth community informed, to explain to them what's happening and suggest what they can do about it.

We have got to put as much energy as we can back into the people, hipping them to where we stand, and to the fact that we all have to stand together to fight the pig and continue to build our own way of life.

There is a saying that goes: "If you wanna get high you 're gonna have to fight." And by fighting we mean doing whatever is necessary to oppose the pig, to bring him down. In that sense, our performances, our rock and roll, is very important fighting. And every musician that really knows what's going on and is doing something positive about it is a guerrilla fighter in the revolution. If you can dig that.

There are some long range things that we can start planning and building right NOW that involve liberating die music business from the hands of the pigs. Like setting up a People's Recording Cooperative mat would make sure that all the bands were able to make recordings that would be sold to the people at the lowest prices and thus reaching the biggest possible audience. And a People's Booking Agency that would allow all the bands to play for as many people as possible. To sustain itself the People's Booking Agency will take only 5 percent of each job wage, as opposed to the 10 to 20 percent taken by all other, capitalistic, agencies.

People's Agency bands can accept jobs from whoever they want-but they can also request that club owners book them only through the People's Agency, putting more of their hard-earned money back to their own good use.

We've all been stuck too long in the plastic heart of phony Amerika-that goes for our brothers and sisters the students the hippies and the factory workers as well as us musicians-and it's time that we started thinking about getting ourselves together and doing something about it.

We've already got our rock and roll and a good start on a new way of life. Now we've got to start protecting what we've got and move to keep growing and getting farther and farther out as a people of a new Nation-our own Youth Nation.

As we become stronger and freer our music will get stronger and freer and farther out, too. When you think about it there's absolutely no limit to what we can do, once we're united, to change the music that is our LIFE that is the only answer to the contradictions of pig Amerika.