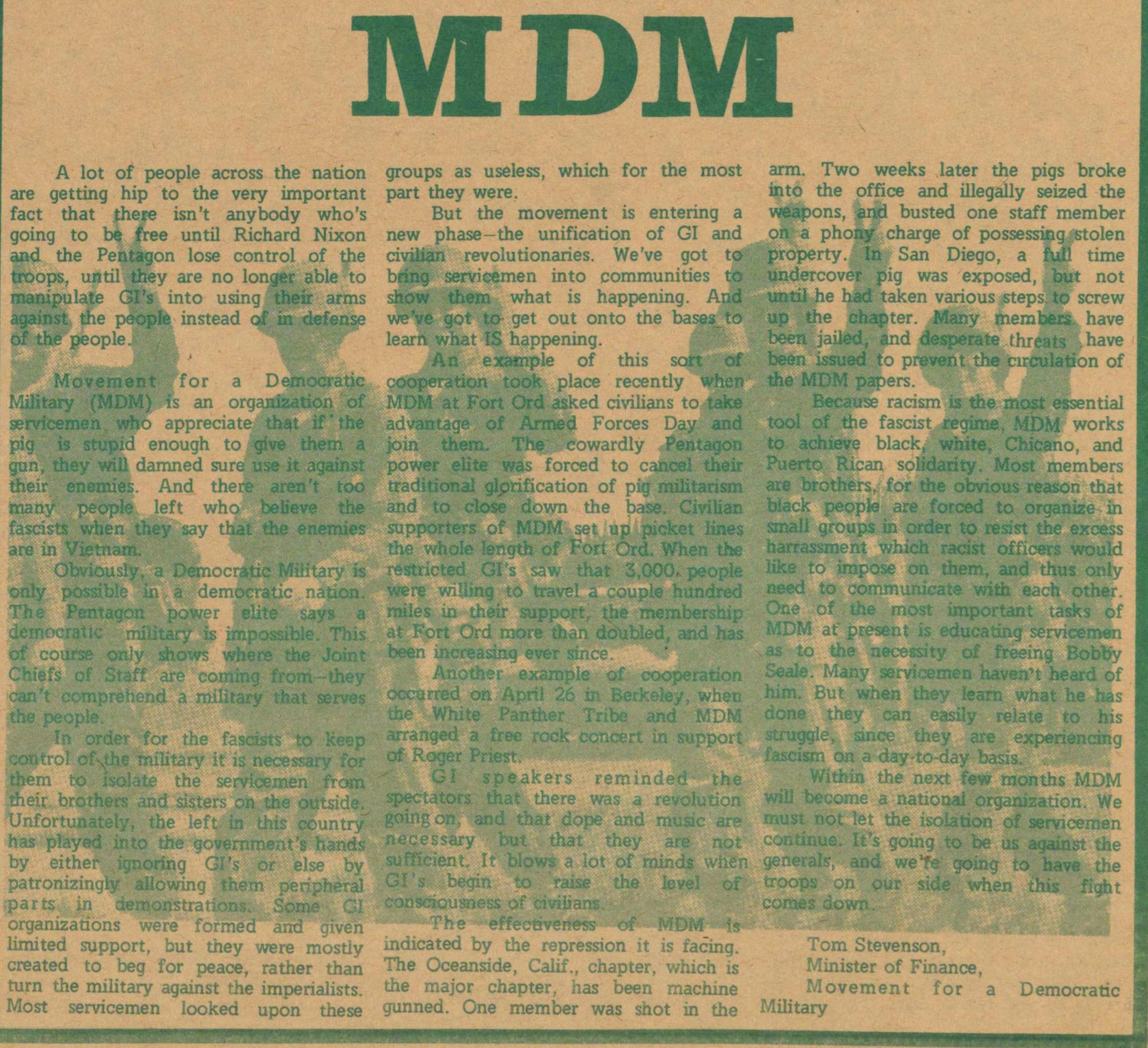 A lot of people across the nation are getting hip to the very important fact that there isn't anybody who's going to be free until Richard Nixon and the Pentagon lose control of the troops, until they are no longer able to manipulate Gl's into using their arms against the people instead of in defense of the people.

Movement for a Democratic Military (MDM) is an organization of servicemen who appreciate that if the pig is stupid enough to give them a gun, they will damned sure use it against their enemies. And there aren't too many people left who believe the fascists when they say that the enemies are in Vietnam.

Obviously, a Democartic Military is only possible in a democratic nation. The Pentagon power elite says a democratic militrary is impossible. This of course only shows where the Joint Chief of Staff are coming from-they can't comprehend a military that serves the people.

In order for the fascists to keep control of the military it is necessary for them to isolate the servicemen from their brothers and sisters on the outside. Unfortunately, the left in the country has played into the government's hand by either ignoring GIs or else by patronizingly allowing them peripheral parts in demonstrations. Some GI organizations were formed  and given limited support, but they were mostly created to beg for peace, rather than turn the military against the imperialists. Most servicemen looked upon these groups as useless, which for the most part they were.

But the movement is entering a new phase-the unification of GI and civilian revolutionaries. We've got to bring servicemen into communities to show them what is happening. And we've got get out onto the bases to learn what IS happening.

An example of this sort of cooperation took place recently when MDM at Fort Ord asked civilians to take advantage of Armed Forces Day and join them. The cowardly Pentagon power elite was forced to cancel their traditional glorification of pig militarism and to close down the base. Civilian supporters of MDM set up picket lines the whole length of Fort Ord. When the 3,000 people  were willing to travel a couple hundred miles in their support, the membership at Fort Ord more than doubled, and has been increasing ever since.

Another example of this sort of cooperation occurred on April 26 in Berkeley, when the White Panther Tribe and MDM arranged for a free rock concert in support of Roger Priest.

GI speakers reminded the spectators that there was a revolution going on, and that dope and music are necessary but that they are not sufficient. It blows a lot of minds when GIs begin to raise the level of consciousness of civilians.

The effectiveness of MDM is indicated by the repression it is facing. The Oceanside, Calif., chapter, which is the major chapter, has been machine gunned. One member was shot in the arm. Two weeks later the pigs broke into the office and illegally seized the weapon and busted one staff member on a phony charge of possessing stolen property. In San Diego, a full time undercover pig was exposed, but not until he had taken various steps to screw up the chapter. Many members have been jailed, and desperate threats have been issued to prevent the circulation of the MDM papers.

Because racism is the most essential tool of the fascist regime, MDM works to achieve black, white. Chicano, and Puerto Rican solidarity. Most members are brothers, for the obvious reason that black people are forced to organize in small groups in order to resist the excess harassment which racist officers would like to impose on them, and thus only need to communicate with each other. One of important tasks of MDM at present is educating servicemen as to the necessity of freeing Bobby Seale. Many serviceman haven't heard of him. But when they learn what he has done they can easily relate to his struggle, since they are experiencing fascism on a day-to-day basis.

Within the next few months MDM will be become a national organization. We must not let the isolation of servicemen continue. It's going to be us against the generals, and we're going to have the troops on our side when this fight comes down.

Movement for a Democratic Military