Up The White Panther Party 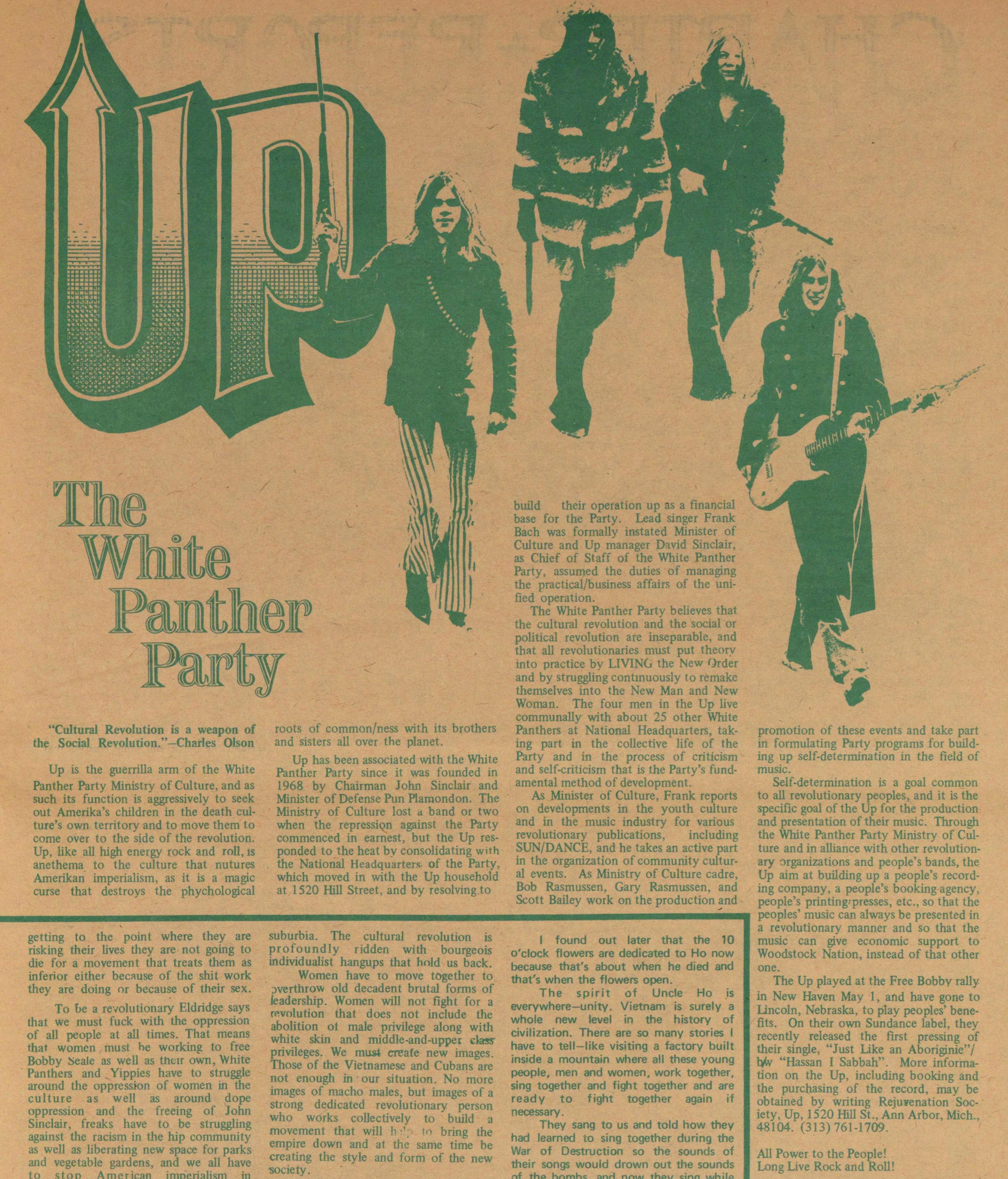 Up is the guerrilla arm of the White Panther Party Ministry of Culture, and as such its function is aggressively to seek out Amerika's children in the death culture's own territory and to move them to come over to the side of the revolution. Up, like all high energy rock and roll, is anethema to the culture that nurtures Amerikan imperialism, as it is a magic curse that destroys the phychological roots of common/ness with its brothers and sisters all over the planet.

Up has been associated with the White Panther Party since it was founded in 1968 by Chairman John Sinclair and Minister of Defense Pun Plamondon. The Ministry of Culture lost a band or two when the repression against the Party commenced in earnest, but the Up responded to the heat by consolidating with the National Headquarters of the Party, which moved in with the Up household at 1520 Hill Street, and by resolving to build their operation up as a financial base for the Party. Lead singer Frank Bach was formally instated Minister of Culture and Up manager David Sinclair, as Chief of Staff of the White Panther Party, assumed the duties of managing the practical/business affairs of the unified operation.

The White Panther Party believes that the cultural revolution and the social or political revolution are inseparable, and that all revolutionaries must put theory into practice by LIVING the New Order and by struggling continuously to remake themselves into the New Man and New Woman. The four men in the Up live communally with about 25 other White Panthers at National Headquarters, taking part in the collective life of the Party and in the process of criticism and self-criticism that is the Party's fundamental method of development.

As Minister of Culture, Frank reports on developments in the youth culture and in the music industry for various revolutionary publications, including SUN/DANCE, and he takes an active part in the organization of community cultural events. As Ministry of Culture cadre, Bob Rasmussen, Gary Rasmussen, and Scott Bailey work on the production and promotion of these events and take part in formulating Party programs for building up self-determination in the field of music.

Self-determination is a goal common to all revolutionary peoples, and it is the specific goal of the Up for the production and presentation of their music. Through the White Panther Party Ministry of Culture and in alliance with other revolutionary organizations and people's bands, the Up aim at building up a people's recording company, a people's booking agency, people's printing'presses, etc., so that the peoples' music can always be presented in a revolutionary manner and so that the music can give economic support to Woodstock Nation, instead of that other one.

The Up played at the Free Bobby rally in New Haven May 1, and have gone to Lincoln, Nebraska, to play peoples' benefits. On their own Sundance label, they recently released the first pressing of their single, "Just Like an Aboriginie"/ "Hassan I Sabbah". More information on the Up, including booking and the purchasing of the record, may be obtained by writing Rejuvenation Society, Up, 1520 Hill St., Ann Arbor, Mich., 48104. (313)761-1709.