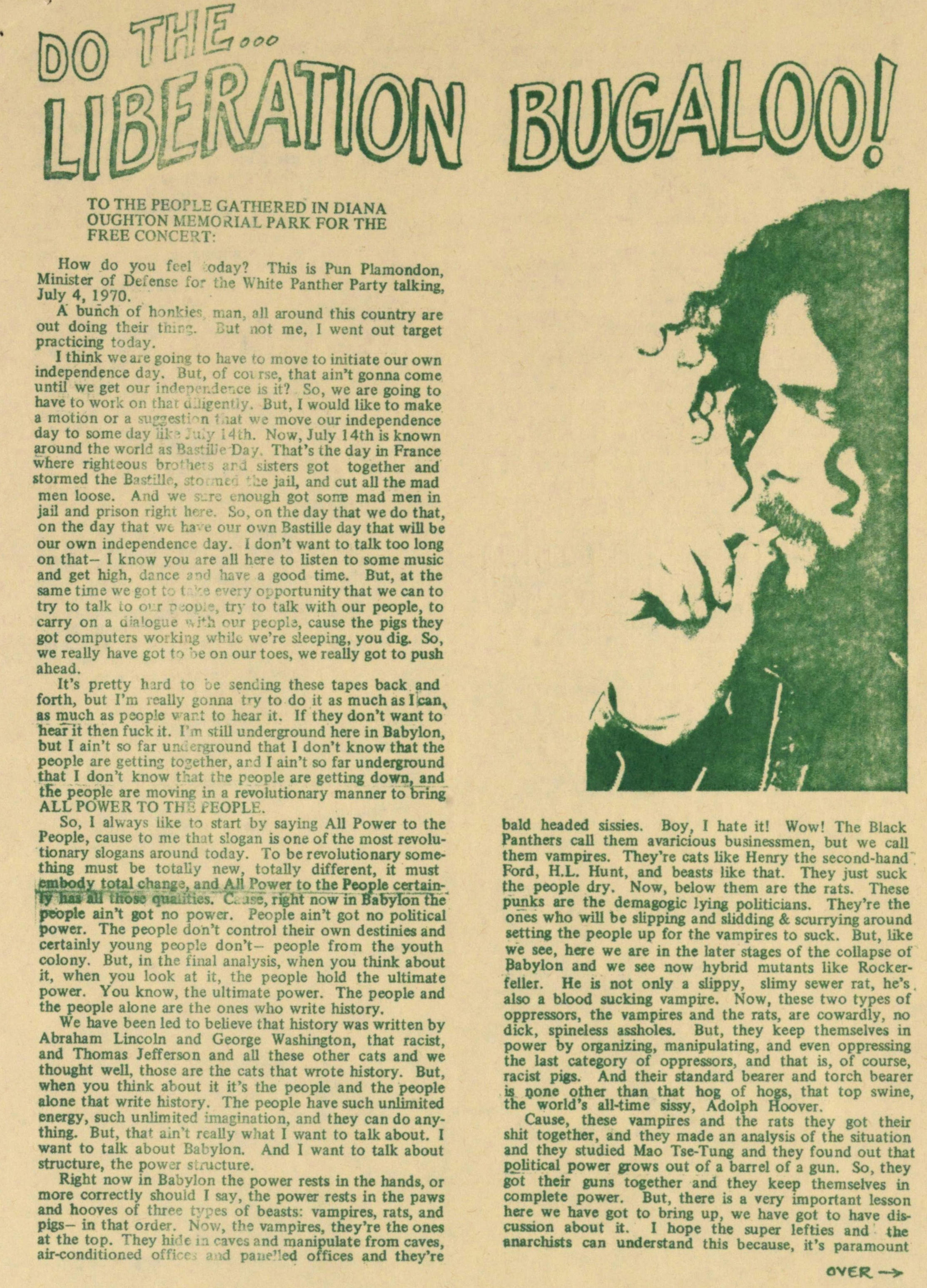 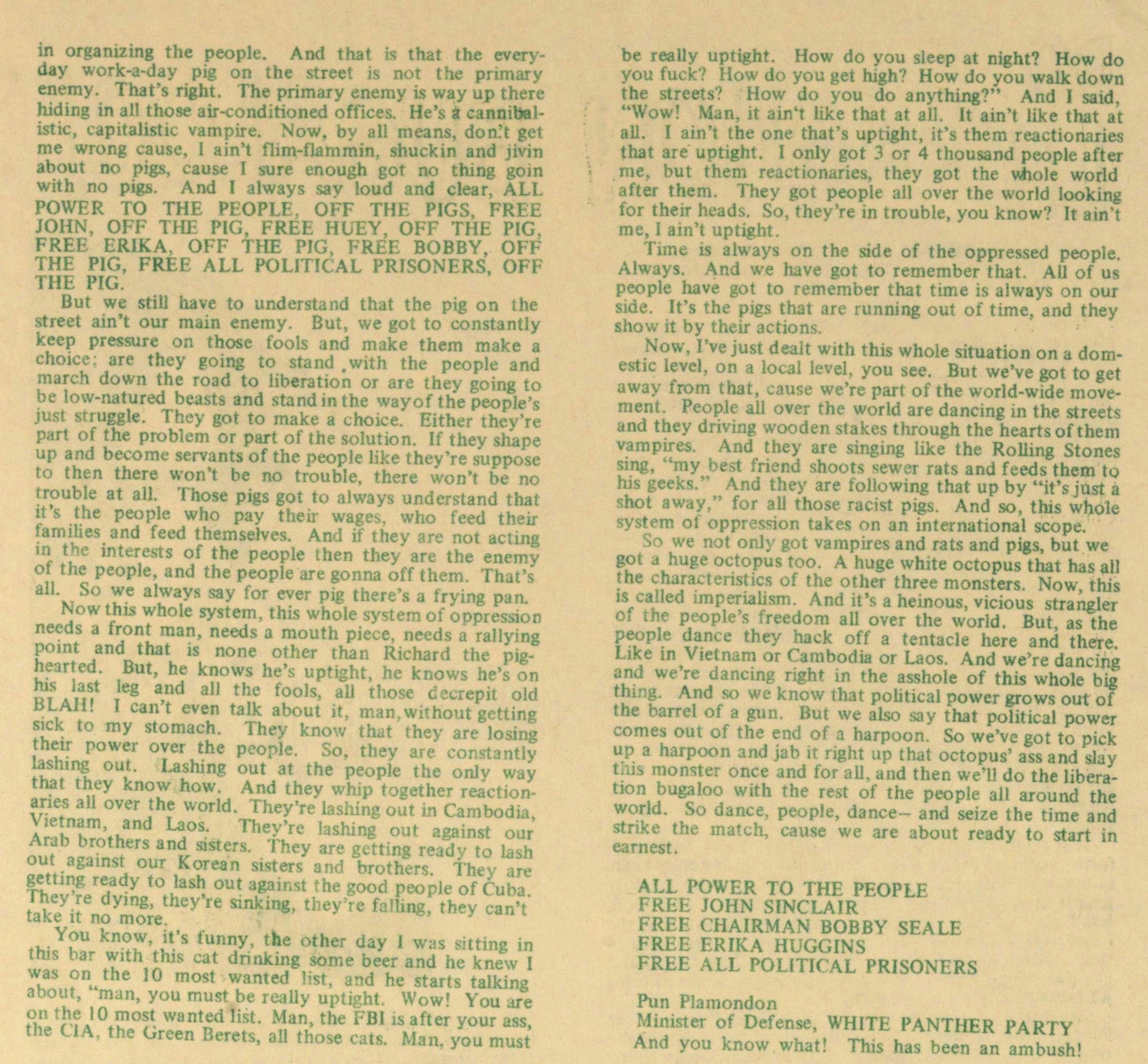 TO THE PEOPLE GATHERED IN DIANA OUGHTON MEMORIAL PARK FOR THE FREE CONCERT:

How do you feel today? This is Pun Plamondon, Minister of Defense for the White Panther Party talking, July 4, 1970.

A bunch of honkies, man, all around this country are out doing their thing. But not me, I went out target practicing today.

I think we are going to have to move to initiate our own independence day. But, of course, that ain't gonna come until we get our independence  is it? So, we are going to have to work on that diligently. But, I would like to make a motion or a suggestion that we move our independence day to some day like July 14th. Now, July 14th is known around the world as Bastille Day. That's the day in France where righteous brothers and sisters got together and stormed the Bastille, stormed the jail, and cut all the mad men loose. And we sure enough got some mad men in jail and prison right here. So, on the day that we do that, on the day that we have our own Bastille day that will be our own independence day. I don't want to talk too long on that- I know you are all here to listen to some music and get high, dance and have a good time. But, at the same time we got to take every opportunity that we can to try to talk to our people, try to talk with our people, to carry on a dialogue with our people, cause the pigs they got computers working while we're sleeping, you dig. So, we really have got to be on our toes, we really got to push ahead.

It's pretty hard to be sending these tapes back and forth, but I'm really gonna try to do it as much as I can, as much as people want to hear it. If they don't want to hear it then fuck it. I'm still underground here in Babylon, but I ain't so far underground that I don't know that the people are getting down, and the people are moving in a revolutionary manner to bring ALL POWER TO THE PEOPLE.

So, I always like to start by saying ALL POWER to the People, cause to me that slogan is one of the most revolutionary slogans around today. To be revolutionary something must be totally new, totally different, it must embody total change, and All Power to the People certainly has all those qualities. Cause, right now in Babylon the people ain't got no power. People ain't got no political power. The people don't control their own destinies and certainly young people don't- people from the youth colony. But, in the final analysis, when you think about it, when you look at it, the people hold the ultimate power. You know, the ultimate power. The people and the people alone are the ones who write history.

Right now in Babylon the power rests in the hands, or more correctly should I say, the power rests in the paws and hooves of three types of beasts: vampires, rats, and pigs - in that order. Now, the vampires, they're the ones at the top, They hide in caves and manipulate from caves, air-conditioned offices and panelled offices and they're bald headed sissies. Boy, I hate it! Wow! The Black Panthers call them avaricious businessmen, but we call them vampires. They're cats like Henry the second-hand Ford, H.L. Hunt, and beasts like that. They just suck the people dry. Now, below them are the rats. These punks are the demagogic lying politicians. They're the ones who will be slipping and slidding & scurrying around setting the people up for the vampires to suck. But, like we see, here we are in the later stages of the collapse of Babylon and we see now hybrid mutants like Rockerfeller. He is not only a slippy, slimy sewer rat, he's also a blood sucking vampire. Now, these two types of oppressors, the vampires and the rats, are cowardly, no dick, spineless assholes. But, they keep themselves in power by organizing, manipulating, and even oppressing the last category of oppressors, and that is, of course, racist pigs. And their standard bearer and torch bearer is none other that hog of hogs, that top swine, the world's all-time sissy, Adolph Hoover.

Cause, these vampires and the rats they got their shit together, and they made an analysis of the situation and they studied Mao Tse-Tung and they found out that political power grows out of a barrel of a gun. So, they got their guns together and they keep themselves in complete power, But, there is a very important lesson here we have got to bring up, we have got to have discussion about it. I hope the super lefties and the anarchists can understand this because, it's paramount in organizing the people. And that is that the everyday work-a-day pig on the street is not the primary enemy. That's right. The primary enemy is way up there hiding in all those air-conditioned offices. He's a cannibalistic, capitalistic vampire. Now, by all means, don't get me wrong cause, I ain't flim-flammin, shuckin and jivin about no pigs, cause I sure enough got no thing goin with no pigs. And I always say loud and clear, ALL POWER TO THE PEOPLE, OFF THE PIGS, FREE JOHN, OFF THE PIG, FREE HUEY, OFF THE PIG, FREE ERIKA, OFF THE PIG, FREE BOBBY, OFF THE PIG, FREE ALL POLITICAL PRISONERS, OFF THE PIG.

But we still have to understand that the pig on the street ain't our main enemy. But, we got to constantly keep pressure on those fools and make them make a choice; are they going to stand with the people and march down the road to liberation or are they going to be low-natured beasts and stand in the way of the people's just struggle. They got to make a choice. Either they're part of the problem or part of the solution. If they shape up and become servants of the people like they're suppose to then there won't be no trouble, there won't be no trouble at all. Those pigs got to always understand that it's the people who pay their wages, who feed their families and feed themselves. And if they are not acting in the interests of the people then they are the enemy of the people, and the people are gonna off them. That's all. So we always say for ever pig there's a frying pan.

Now this whole system, this whole system of oppression needs a front man, needs a mouth piece, needs a rallying point and that is none other than Richard the pig-hearted. But, he knows he's uptight, he knows he's on his last leg and all the fools, all those decrepit old BLAH! I can't even talk about it, man, without getting sick to my stomach. They know that they are losing their power over the people. So, they are constantly lashing out. Lashing out at the people the only way that they know how. And they whip together reactionaries all over the world. They're lashing out in Cambodia, Vietnam, and Laos. They're lashing out against our Arab brothers and sisters. They are getting ready to lash out against our Korean sisters and brothers. They are getting ready to lash out against the good people of Cuba. They're dying, they're sinking, they're falling, they can't take it no more.

You know, its funny, the other day I was sitting in this bar with this cat drinking some beer and he knew I was on the 10 most wanted list, and he starts talking about, "man, you must be really uptight. Wow! You are on the 10 most wanted list. Man, the FBI is after your ass, the CIA, the Green Berets, all those cats. Man, you must be really uptight. How do you sleep at night? How do you fuck? How do you get high? How do you walk down the streets? How do you do anything?" And I said, "Wow! Man, it ain't like that at all. It ain't like that at all. I ain't the one that's uptight, it's them reactionaries that are uptight. I only got 3 or 4 thousand people after me, but them reactionaries, they got the whole world after them. They got people all over the world looking for their heads. So, they're in trouble, you know? It ain't me, I ain't uptight.

Now, I've just dealt with this whole situation on a domestic level, on a local level, you see. But we've got to get away from that, cause we're part of the world-wide movement. People all over the world are dancing in the streets and they driving wooden stakes through the hearts of them vampires. And they are singing like the Rolling Stones sing, "my best friend shoots sewer rats and feeds them to his geeks." And they are following that up by "it's just a shot away," for all those racist pigs. And so, this whole system of oppression takes on an international scope.

So we not only got vampires and rats and pigs, but we got a huge octopus too. A huge white octopus that has all the characteristics of the other three monsters. Now, this is called imperialism. And it's a heinous, vicious strangler of the people's freedom all over the world. But, as the people dance they hack off a tentacle here and there. Like in Vietnam or Cambodia or Laos. And we're dancing and we're dancing right in the asshole of this whole big thing. And so we know that political power grows out of the barrel of a gun. But we also say that political power comes out of the end of a harpoon. So we've got to pick up a harpoon and jab it right up that octopus' ass and slay this monster once and for all, and then we'll do the liberation bugaloo with the rest of the people all around the world. So dance, people, dance - and seize the time and strike the match, cause we are about ready to start in earnest.

And you know what! This has been an ambush!