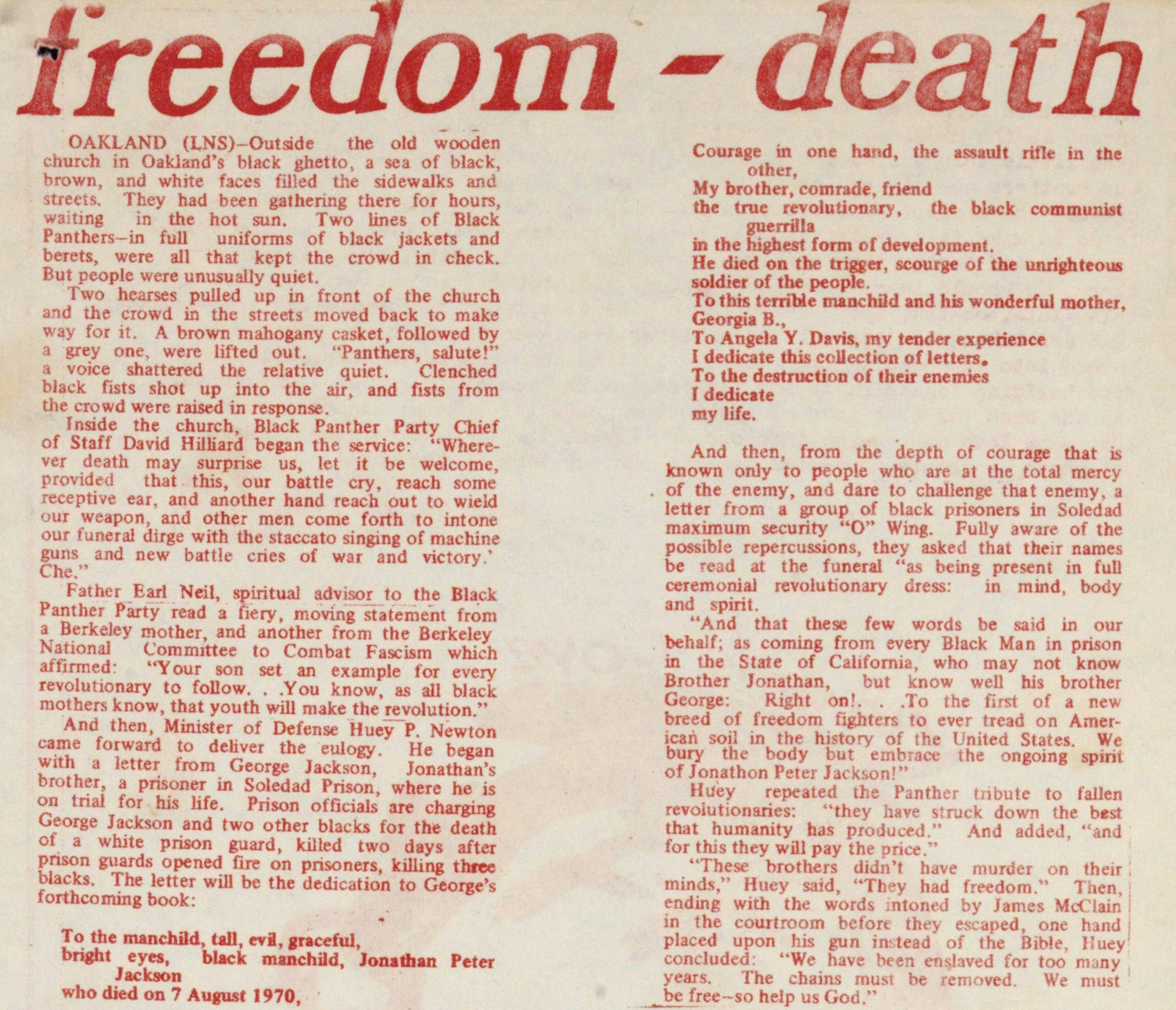 OAKLAND (LNS) – Outside the old wooden church in Oakland's black ghetto, a sea of black, brown, and white faces filled the sidewalks and streets. They had been gathering there for hours, waiting in the hot sun. Two lines of Black Panthers – in full uniforms of black jackets and berets, were all that kept the crowd in check. But people were unusually quiet.

Two hearses pulled up in front of the church and the crowd in the streets moved back to make way for it. A brown mahogany casket, followed by a grey one. were lifted out. "Panthers, salute!" a voice shattered the relative quiet. Clenched black fists shot up into the air, and fists from the crowd were raised in response.

Inside the church, Black Panther Party Chief of Staff David Hilliard began the service: "Wherever death may surprise us, let it be welcome, provided that this, our battle cry, reach some receptive ear, and another hand reach out to wield our weapon, and other men come forth to intone our funeral dirge with the staccato singing of machine guns and new battle cries of war and victory ' Che."

Father Earl Neil, spiritual advisor to the Black Panther Party read a fiery, moving statement from a Berkeley mother, and another from the Berkeley National Committee to Combat Fascism which affirmed: "Your son set an example for every revolutionary to follow. . .You know, as all black mothers know, that youth will make the revolution."

And then, Minister of Defense Huey P. Newton carne forward to deliver the eulogy. He began with a letter from George Jackson, Jonathan's brother, a prisoner in Soledad Prison, where he is on trial for his life. Prison officials are charging George Jackson and two other blacks for the death of a white prison guard, killed two days after prison guards opened fire on prisoners, killing three blacks. The letter will be the dedication to George's forthcoming book:

To the manchild, tall, evil, graceful, bright eyes, black manchild, Jonathan Peter Jackson who died on 7 August 1970, Courage in one hand, the assault rille in the other, My brother, comrade, friend the true revolutionary, the black communist guerrilla in the highest form of development. He died on the trigger, scourge of the unrighteous soldier of the people. To this terrible manchild and his wonderful mother, Georgia B., To Angela Y. Davis, my tender experience I dedicate this collection of letters. To the destruction of their enemies I dedicate my life.

And then, from the depth of courage that is known only to people who are at the total mercy of the enemy, and dare to challenge that enemy, a letter from a group of black prisoners in Soledad maximum security "O" Wing. Fully aware of the possible repercussions, they asked that their names be read at the funeral "as being present in full ceremonial revolutionary dress: in mind, body and spirit. "And that these few words be said in our behalf; as coming from every Black Man in prison in the State of California, who may not know Brother Jonathan, but know well his brother George: Right on!. . .To the first of a new breed of freedom fighters to ever tread on American soil in the history of the United States. We bury the body but embrace the ongoing spirit of Jonathon Peter Jackson!"

Huey repeated the Panther tribute to fallen revolutionaries: "they have struck down the best that humanity has produced." And added, "and for this they will pay the price."

"These brothers didn't have murder on their minds," Huey said, "They had freedom." Then. ending with the words intoned by James McClain in the courtroom before they escaped, one hand placed upon his gun instead of the Bible, Huey concluded: "We have been enslaved for too many years. The chains must be removed. We must be free – so help us God."