The Fbi-cia Conspiracy To Eliminate The Righteous Leadership Of The Youth Masses Will Surely Be Exposed And End With The Total Defeat Of These Running Dog Lackies Of The Imperialist War-monger Death Cult! 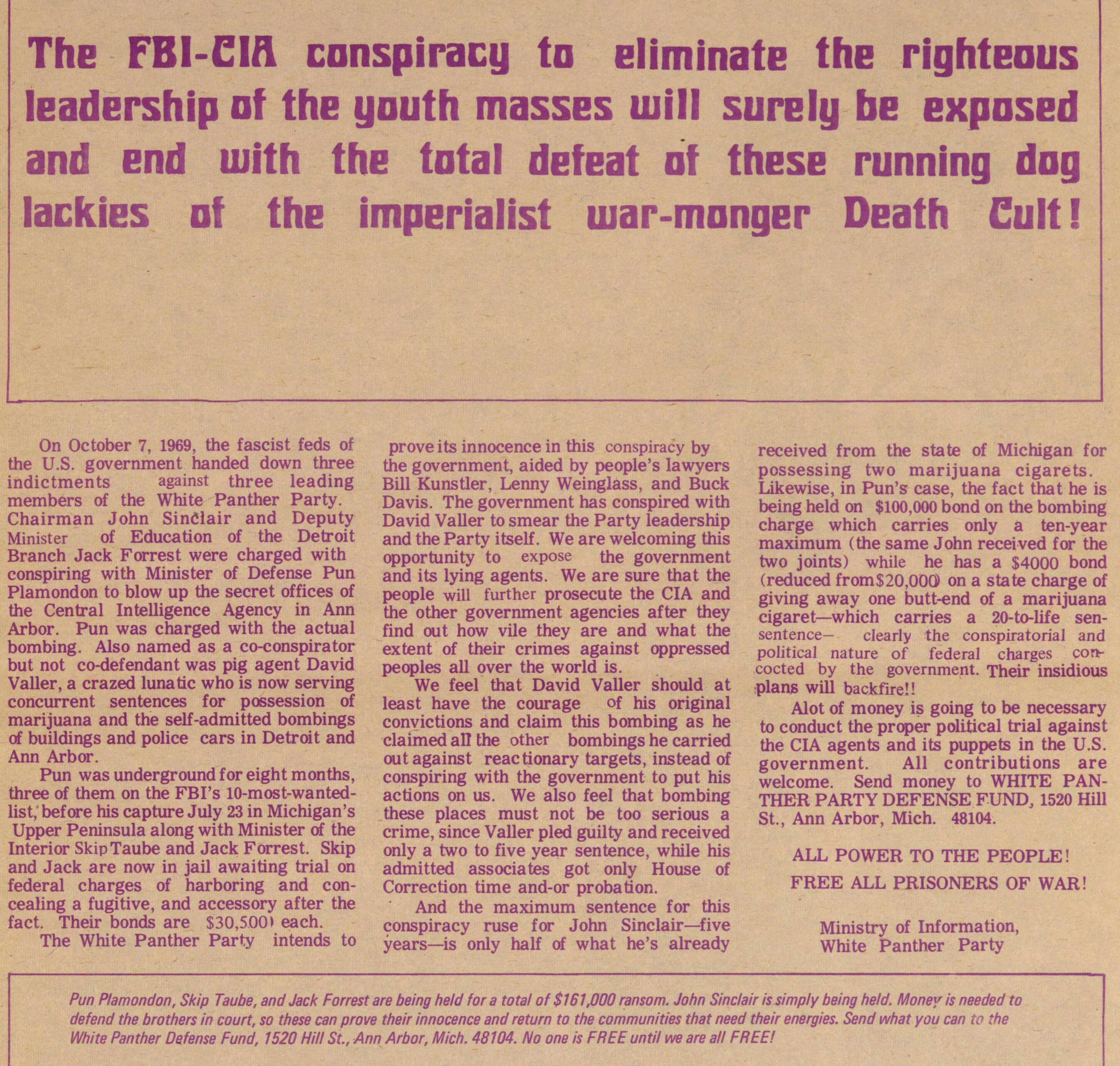 The FBI-CIA conspiracy to eliminate the righteous leadership of the youth masses will surely be exposed and end with the total defeat of these running dog lackies of the imperialist war-monger Death Cult!

On October 7, 1969, the fascist feds of the U.S. government handed down three indictments against three leading members of the White Panther Party. Chairman John Sinclair and Deputy Minister of Education of the Detroit Branch Jack Forrest were charged with conspiring with Minister of Defense Pun Plamondon to blow up the secret offices of the Central Intelligence Agency in Ann Arbor. Pun was charged with the actual bombing. Also named as a co-conspirator but not co-defendant was pig agent David Valler, a crazed lunatic who is now serving concurrent sentences for possession of marijuana and the self-admitted bombings of buildings and police cars in Detroit and Ann Arbor.

Pun was underground for eight months, three of them on the FBI's 10-most-wanted-list, before his capture July 23 in Michigan's Upper Peninsula along with Minister of the Interior Skip Taube and Jack Forrest. Skip and Jack are now in jail awaiting trial on federal charges of harboring and concealing a fugitive, and accessory after the fact. Their bonds are $30,500 each.

The White Panther Party intends to prove its innocence in this conspiracy by the government, aided by people's lawyers Bill Kunstler, Lenny Weinglass, and Buck Davis. The government has conspired with David Valler to smear the Party leadership and the Party itself . We are welcoming this opportunity to expose the government and its lying agents. We are sure that the people will further prosecute the CIA and the other government agencies after they find out how vile they are and what the extent of their crimes against oppressed peoples all over the world is.

We feel that David Valler should at least have the courage of his original convictions and claim this bombing as he claimed all the other bombings he carried out against reactionary targets, instead of conspiring with the government to put his actions on us. We also feel that bombing these places must not be too serious a crime, since Valler pled guilty and received only a two to five year sentence, while his admitted associates got only House of Correction time and-or probation.

And the maximum sentence for this conspiracy ruse for John Sinclair--five years--is only half of what he's already received from the state of Michigan for possessing two marijuana cigarets. Likewise, in Pun's case, the fact that he is being held on $100,000 bond on the bombing charge which carries only a ten-year maximum (the same John received for the two joints) while he has a $4000 bond (reduced from $20,000) on a state charge of giving away one butt-end of a marijuana cigaret--which carries a 20-to-life sentence--clearly the conspiratorial and political nature of federal charges concocted by the government. Their insidious plans will backfire!!

A lot of money is going to be necessary to conduct the proper political trial against the CIA agents and its puppets in the U.S. government. All contributions are welcome. Send money to WHITE PANTHER PARTY DEFENSE FUND, 1520 Hill St., Ann Arbor, Mich. 48104.

FREE ALL PRISONERS OF WAR!

Pun Plamondon, Skip Taube, and Jack Forrest are being held for a total of $161,000 ransom. John Sinclair is simply being held. Money is needed to defend the brothers in court, so these can prove their innocence and return to the communities that need their energies. Send what you can to the White Panther Defense Fund, 1520 Hill St., Ann Arbor, Mich. 48104. No one is FREE until we are all FREE!