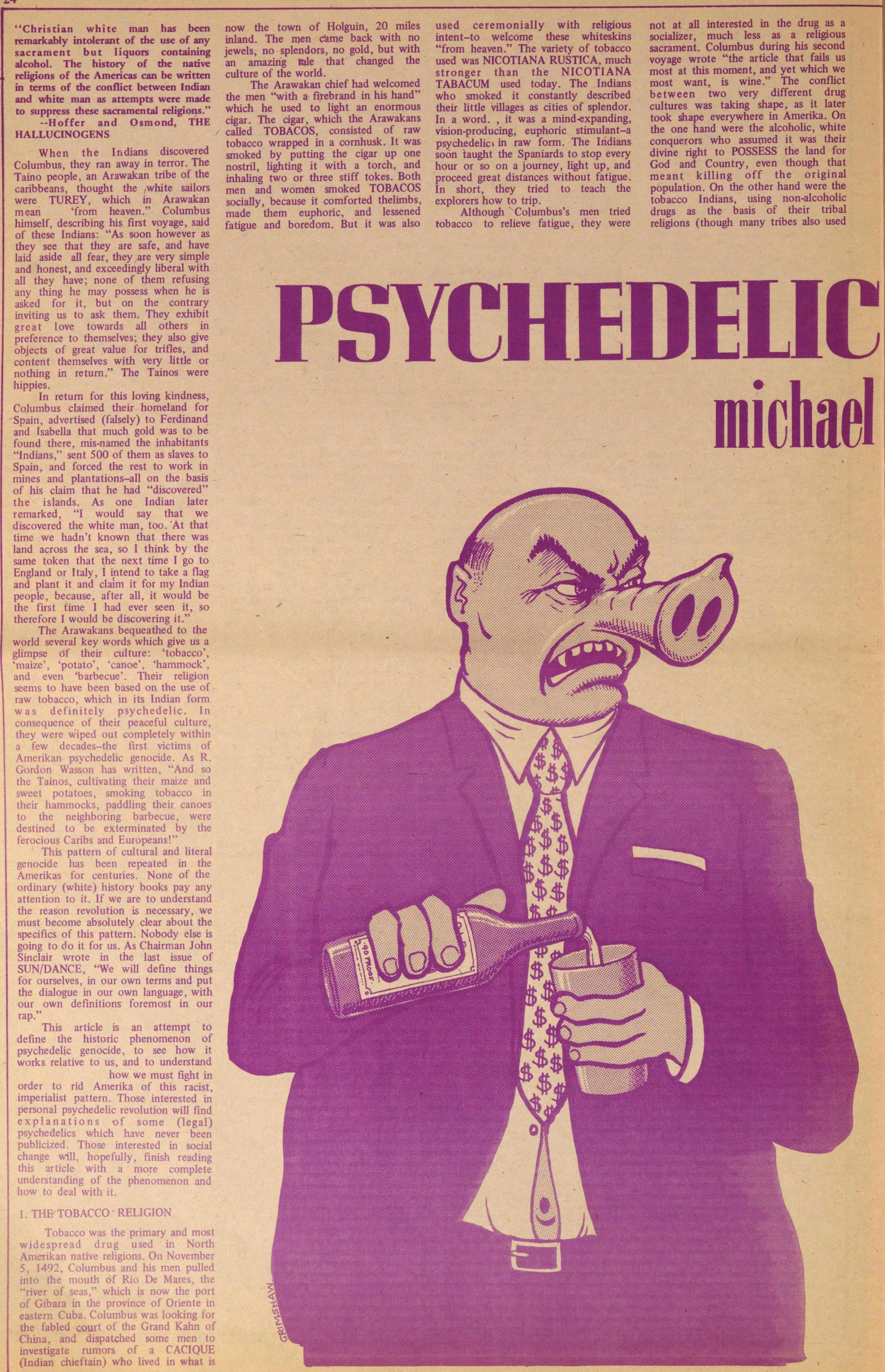 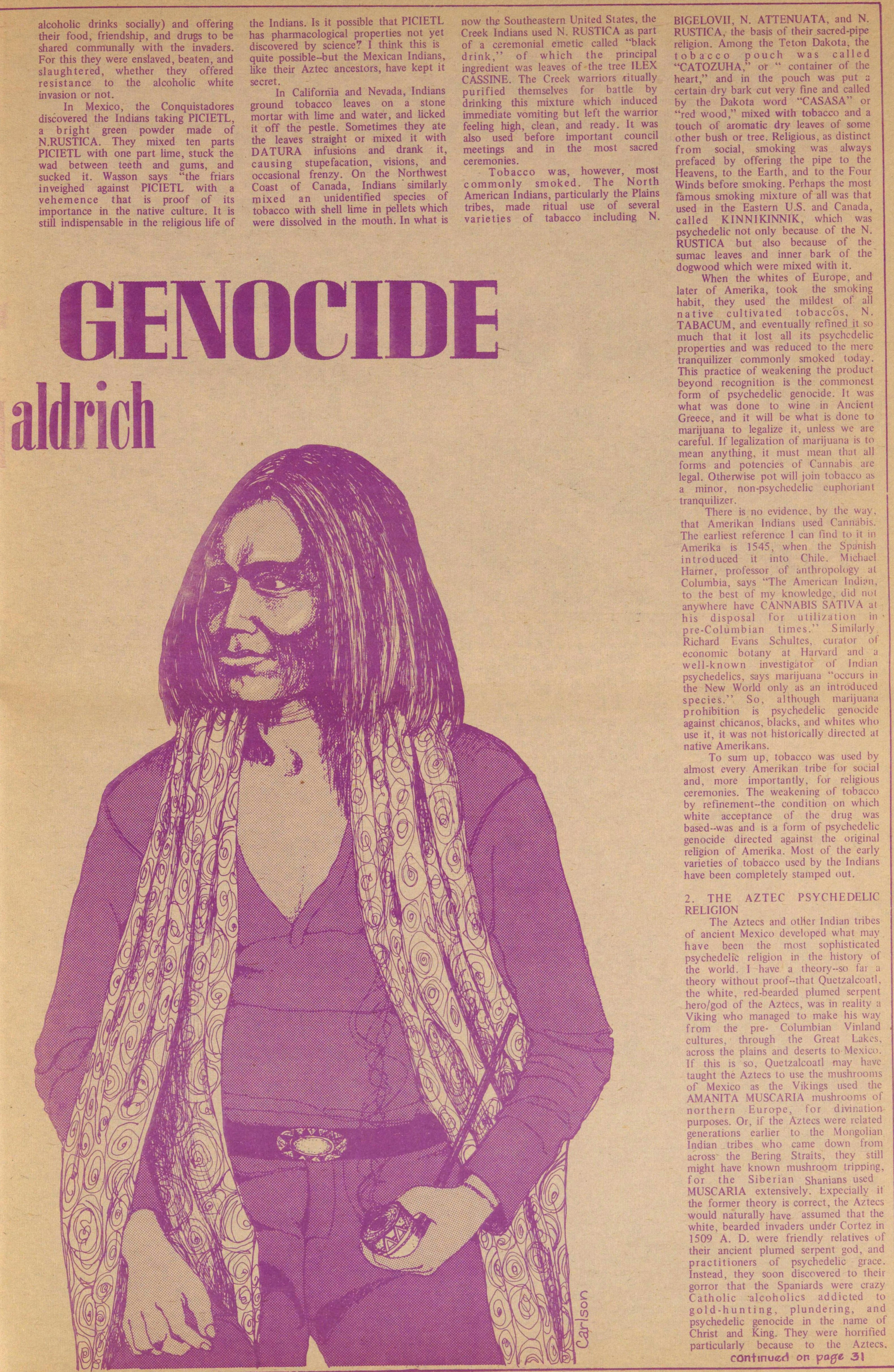 "Christian white man has been remarkably intolerant of the use of any sacrament but liquors containing alcohol. The history of the native religions of the Americas can be written in terms of the conflict between Indian and white man as attempts were made to suppress these sacramental religions."

--Hoffer and Osmond, THE HALLUCINOGENS

When the Indians discovered Columbus, they ran away in terror. The Taino people, an Arawakan tribe of the caribbeans, thought the white sailors were TUREY, which in Arawakan mean 'from heaven." Columbus himself, describing his first voyage, said of these Indians: "As soon however as they see that they are safe, and have Iaid aside all fear, they are very simple and honest, and exceedingly liberal with all they have; none of them refusing any thing he may possess when he is asked for it, but on the contrary inviting us to ask them. They exhibit great love towards all others in preference to themselves; they also give objects of great value for trifles, and content themselves with very little or nothing in return." The Tainos were hippies.

In return for this loving kindness, Columbus claimed their homeland for Spain, advertised (falsely) to Ferdinand and Isabella that much gold was to be found there, mis-named the inhabitants "Indians," sent 500 of them as slaves to Spain, and forced the rest to work in mines and plantations-all on the basis of his claim that he had "discovered" the islands. As one Indian later remarked, "I would say that we discovered the white man, too. At that time we hadn't known that there was land across the sea, so I think by the same token that the next time I go to England or Italy, I intend to take a flag and plant it and claim it for my Indian people, because, after all, it would be the first time I had ever seen it, so therefore I would be discovering it."

The Arawakans bequeathed to the world several key words which give us a glimpse of their culture: 'tobacco', 'maize', 'potato', 'canoe', 'hammock', and even 'barbecue'. Their religion seems to have been based on the use of raw tobacco, which in its Indian form was definitely psychedelic. In consequence of their peaceful culture, they were wiped out completely within a few decades -- the first victims of Amerikan psychedelic genocide. As R. Gordon Wasson has written, "And so the Tainos, cultivating their maize and sweet potatoes, smoking tobacco in their hammocks, paddling their canoes to the neighboring barbecue, were destined to be exterminated by the ferocious Caribs and Europeans!"

This pattern of cultural and literal genocide has been repeated in the Amerikas for centuries. None of the ordinary (white) history books pay any attention to it. If we are to understand the reason revolution is necessary, we must become absolutely clear about the specifics of this pattern. Nobody else is going to do it for us. As Chairman John Sinclair wrote in the last issue of SUN/DANCE, "We will define things for ourselves, in our own terms and put the dialogue in our own language, with our own definitions foremost in our rap."

This article is an attempt to define the historic phenomenon of psychedelic genocide, to see how it works relative to us, and to understand how we must fight in order to rid Amerika of this racist, imperialist pattern. Those interested in personal psychedelic revolution will find explanations of some (legal) psychedelics which have never been publicized. Those interested in social change will, hopefully, finish reading this article with a more complete understanding of the phenomenon and how to deal with it.

Tobacco was the primary and most widespread drug used in North Amerikan native religions. On November 5, 1492, Columbus and his men pulled into the mouth of Rio De Mares, the "river of seas," which is now the port of Gibara in the province of Oriente in eastern Cuba. Columbus was looking for the fabled court of the Grand Kahn of China, and dispatched some men to investigate rumors of a CACIQUE (Indian chieftain) who lived in what is now the town of Holguin, 20 miles inland. The men came back with no jewels, no splendors, no gold, but with an amazing tale that changed the culture of the world.

The Arawakan chief had welcomed the men "with a firebrand in his hand" which he used to light an enormous cigar. The cigar, which the Arawakans called TOBACOS, consisted of raw tobacco wrapped in a cornhusk. It was smoked by putting the cigar up one nostril, lighting it with a torch, and inhaling two or three stiff tokes. Both men and women smoked TOBACOS socially, because it comforted thelimbs, made them euphoric, and lessened fatigue and boredom. But it was also used ceremonially with religious intent-to welcome these whiteskins "from heaven." The variety of tobacco used was NICOTIANA RUSTICA, much stronger than the NICOTIANA TABACUM used today. The Indians who smoked it constantly described their little villages as cities of splendor. In a word. , it was a mind-expanding, vision-producing, euphoric stimulant-a psychedelic in raw form. The Indians soon taught the Spaniards to stop every hour or so on a journey, light up, and proceed great distances without fatigue. In short, they tried to teach the explorers how to trip.

Although Columbus's men tried tobacco to relieve fatigue, they were not at all interested in the drug as a socializer, much less as a religious sacrament. Columbus during his second voyage wrote "the article that fails us most at this moment, and yet which we most want, is wine." The conflict between two very different drug cultures was taking shape, as it later took shape everywhere in Amerika. On the one hand were the alcoholic, white conquerors who assumed it was their divine right to POSSESS the land for God and Country, even though that meant killing off the original population. On the other hand were the tobacco Indians, using non-alcoholic drugs as the basis of their tribal religions (though many tribes also used

alcoholic drinks socially) and offering their food, friendship, and drugs to be shared communally with the invaders. For this they were enslaved, beaten, and slaughtered, whether they offered resistance to the alcoholic white invasion or not.

In Mexico, the Conquistadores discovered the Indians taking PICIETL, a bright green powder made of N.RUSTICA. They mixed ten parts PICIETL with one part lime, stuck the wad between teeth and gums, and sucked it. Wasson says "the friars inveighed against PICIETL with a vehemence that is proof of its importance in the native culture. It is still indispensable in the religious life of the Indians. Is it possible that PICIETL has pharmacological properties not yet discovered by science? I think this is quite possible-but the Mexican Indians, like their Aztec ancestors, have kept it secret.

In California and Nevada, Indians ground tobacco leaves on a stone mortar with lime and water, and licked it off the pestle. Sometimes they ate the leaves straight or mixed it with DATURA infusions and drank it, causing stupefacation, visions, and occasional frenzy. On the Northwest Coast of Canada, Indians similarly mixed an unidentified species of tobacco with shell lime in pellets which were dissolved in the mouth. In what is now the Southeastern United States, the Creek Indians used N. RUSTICA as part of a ceremonial emetic called "black drink," of which the principal ingredient was leaves of the tree ILEX CASSINE. The Creek warriors ritually purified themselves for battle by drinking this mixture which induced immediate vomiting but left the warrior feeling high, clean, and ready. It was also used before important council meetings and in the most sacred ceremonies.

Tobacco was, however, most commonly smoked. The North American Indians, particularly the Plains tribes, made ritual use of several varieties of tabacco including N. BIGELOVII, N. ATTENUATA, and N. RUSTICA, the basis of their sacred-pipe religion. Among the Teton Dakota, the tobacco pouch was called "CATOZUHA," or "container of the heart," and in the pouch was put a certain dry bark cut very fine and called by the Dakota word "CASASA" or "red wood," mixed with tobacco and a touch of aromatic dry leaves of some other bush or tree. Religious, as distinct from social, smoking was always prefaced by offering the pipe to the Heavens, to the Earth, and to the Four Winds before smoking. Perhaps the most famous smoking mixture of all was that used in the Eastern U.S. and Canada, called KINNIKINNIK, which was psychedelic not only because of the N. RUSTICA but also because of the sumac leaves and inner bark of the dogwood which were mixed with it.

When the whites of Europe, and later of Amerika, took the smoking habit, they used the mildest of all native cultivated tobaccos, N. TABACUM, and eventually refined it so much that it lost all its psychedelic properties and was reduced to the mere tranquilizer commonly smoked today. This practice of weakening the product beyond recognition is the commonest form of psychedelic genocide. It was what was done to wine in Ancient Greece, and it will be what is done to marijuana to legalize it, unless we are careful. If legalization of marijuana is to mean anything, it must mean that all forms and potencies of Cannabis are legal. Otherwise pot will join tobacco as a minor, non-psychedelic euphoriant tranquilizer.

There is no evidence, by the way, that Amerikan Indians used Cannabis. The earliest reference I can find to it in Amerika is 1545, when the Spanish introduced it into Chile. Michael Harner, professor of anthropology at Columbia, says "The American Indian. to the best of my knowledge, did not anywhere have CANNABIS SATIVA at his disposal for utilization in pre-Columbian times." Similarly Richard Evans Schultes, curator of economic botany at Harvard and a well-known investigator of Indian psychedelics, says marijuana "occurs in the New World only as an introduced species." So, although marijuana prohibition is psychedelic genocide against chicanos, blacks, and whites who use it, it was not historically directed at native Amerikans.

To sum up, tobacco was used by almost every Amerikan tribe for social and, more importantly, for religious ceremonies. The weakening of tobacco by refinement-the condition on which white acceptance of the drug was based--was and is a form of psychedelic genocide directed against the original religion of Amerika. Most of the early varieties of tobacco used by the Indians have been completely stamped out.

The Aztecs and other Indian tribes of ancient Mexico developed what may have been the most sophisticated psychedelic religion in the history of the world. I have a theory-so far a theory without proof-that Quetzalcoatl the white, red-bearded plumed serpent hero/god of the Aztecs, was in reality a Viking who managed to make his way from the Columbian Vinland cultures, through the Great Lakes. across the plains and deserts to Mexico. If this is so, Quetzalcoatl may have taught the Aztecs to use the mushrooms of Mexico as the Vikings used the AMANITA MUSCARIA mushrooms of northern Europe, for divination purposes. Or, if the Aztecs were related generations earlier to the Mongolian Indian tribes who came down from across the Bering Straits, they still might have known mushroom tripping, for the Siberian Shanians used MUSCARIA extensively. Especially if the former theory is correct, the Aztecs would naturally have assumed that the white, bearded invaders under Cortez in 1509 A. D. were friendly relatives of their ancient plumed serpent god, and practitioners of psychedelic grace. Instead, they soon discovered to their horror that the Spaniards were crazy Catholic alcoholics addicted to gold-hunting, plundering, and psychedelic genocide in the name of Christ and King. They were horrified particularly because to the Aztecs,