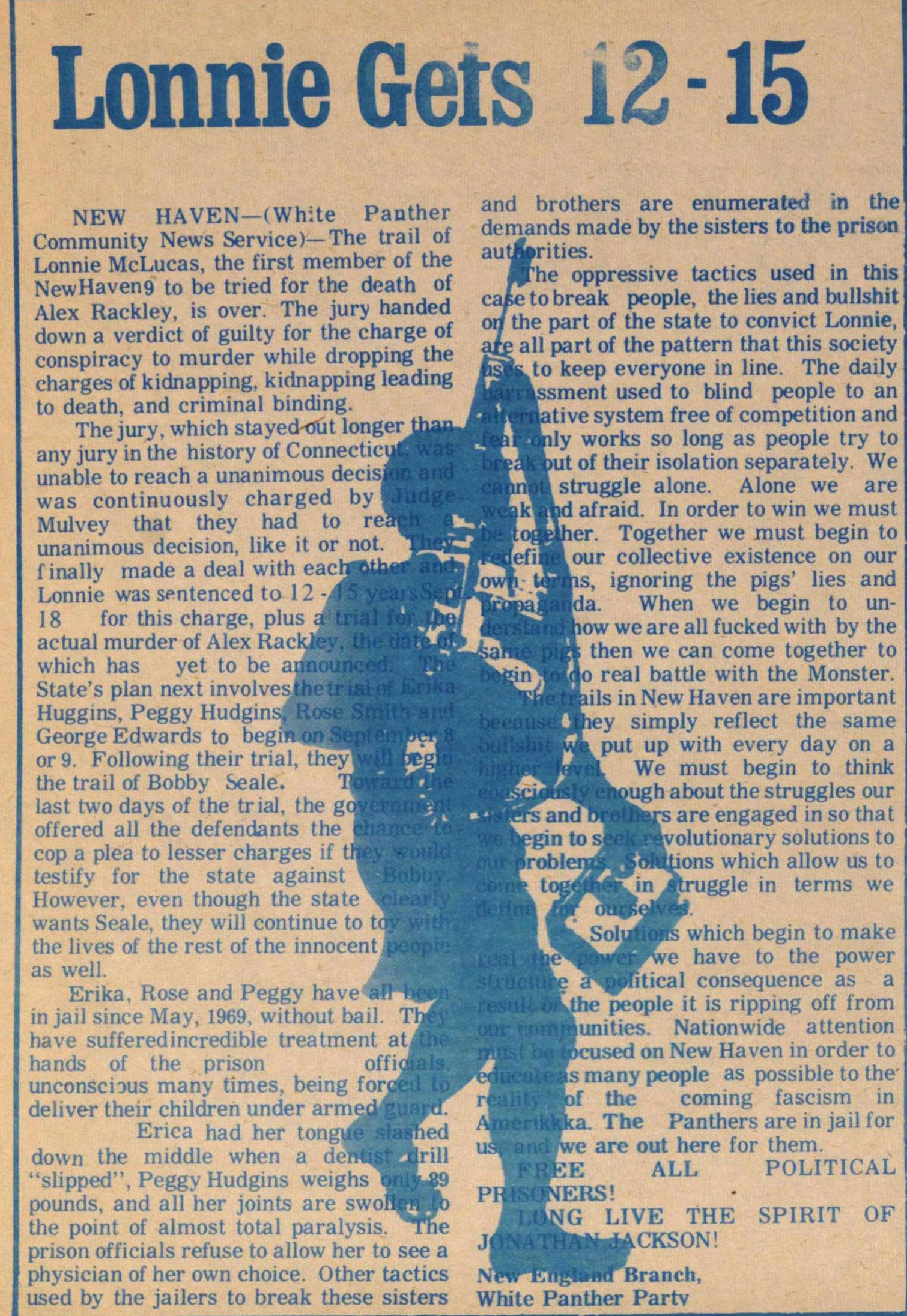 NEW HAVEN- (White Panther Community News Service)- The trial of Lonnie McLucas, the first member of the New Haven 9 to be tried for the death of Alex Rackley, is over. The jury handed down a verdict of guilty for the charge of conspiracy to murder while dropping the charges of kidnapping, kidnapping leading to death, and criminal binding.

The jury, which stayed out longer than any jury in the history of Connecticut, was unable to reach a unanimous decision and was continuously charged by Judge Mulvey that they had to reach a unanimous decision, like it or not. They finally made a deal with each other and Lonnie was sentenced to 12 - 15 years Sept. 18 for this charge, plus a trial for the actual murder of Alex Rackley, the date of which has yet to be announced.  The State's plan next involves the trial of Erika Huggins, Peggy Hudgins, Rose Smith and George Edwards to begin on September 8 or 9.  Following their trial, the government offered all the defendants the chance to cop a plea to lesser charges if they would testify for the state against Bobby.  However, even though the state clearly wants Seale, they will continue to toy with the lives of the innocent people as well.

Erika, Rose and Peggy have all been in jail since May, 1969, without bail.  They have suffered incredible treatment at the hands of the prison officials.  Unconscious many times, being forced to deliver their children under armed guard.

Erika had her tongue slashed down the middle when a dentist drill "slipped", Peggy Hudgins weighs only 89 pounds, and all her joints are swollen to the point of almost total paralysis.  The prison officials refuse to allow her to see a physician of her own choice.  Other tactics used by the jailers to break these sisters and brothers are enumerated in the demands made by the sisters to the prison authorities.

The oppressive tactics used in this case to break people, the lies and bullshit on the part of the state to convict Lonnie, are all part of the pattern that this society uses to keep everyone in line.  The daily harassment used to blind people to an alternative system free of competition and fear only works so long as people try to break out of their isolation separately.  We cannot struggle alone.  Alone we are weak and afraid.  In order to win we must be together.  Together we must begin to redefine our collective existence on our own terms, ignoring the pigs' lies and propaganda.  When we begin to understand how we are all fucked with by the same pigs then we can come together to begin to do real battle with the Monster.

The trials in New Haven are important because they simply reflect the same bullshit we put up with every day on a higher level.  We must begin to thing consciously enough about the struggles our sisters and brothers are engaged in so that we begin to seek revolutionary solutions to our problems.  Solutions which allow us to come together in struggle in terms we define for ourselves.

Solutions which begin to make real the power we have to the power structure a political consequence as a result of the people it is ripping off from our communities.  Nationwide attention must be focused on New Haven in order to educate as many people as possible to the reality of the coming fascism in Amerikkka.  The Panthers are in jail for us, and we are out here for them.