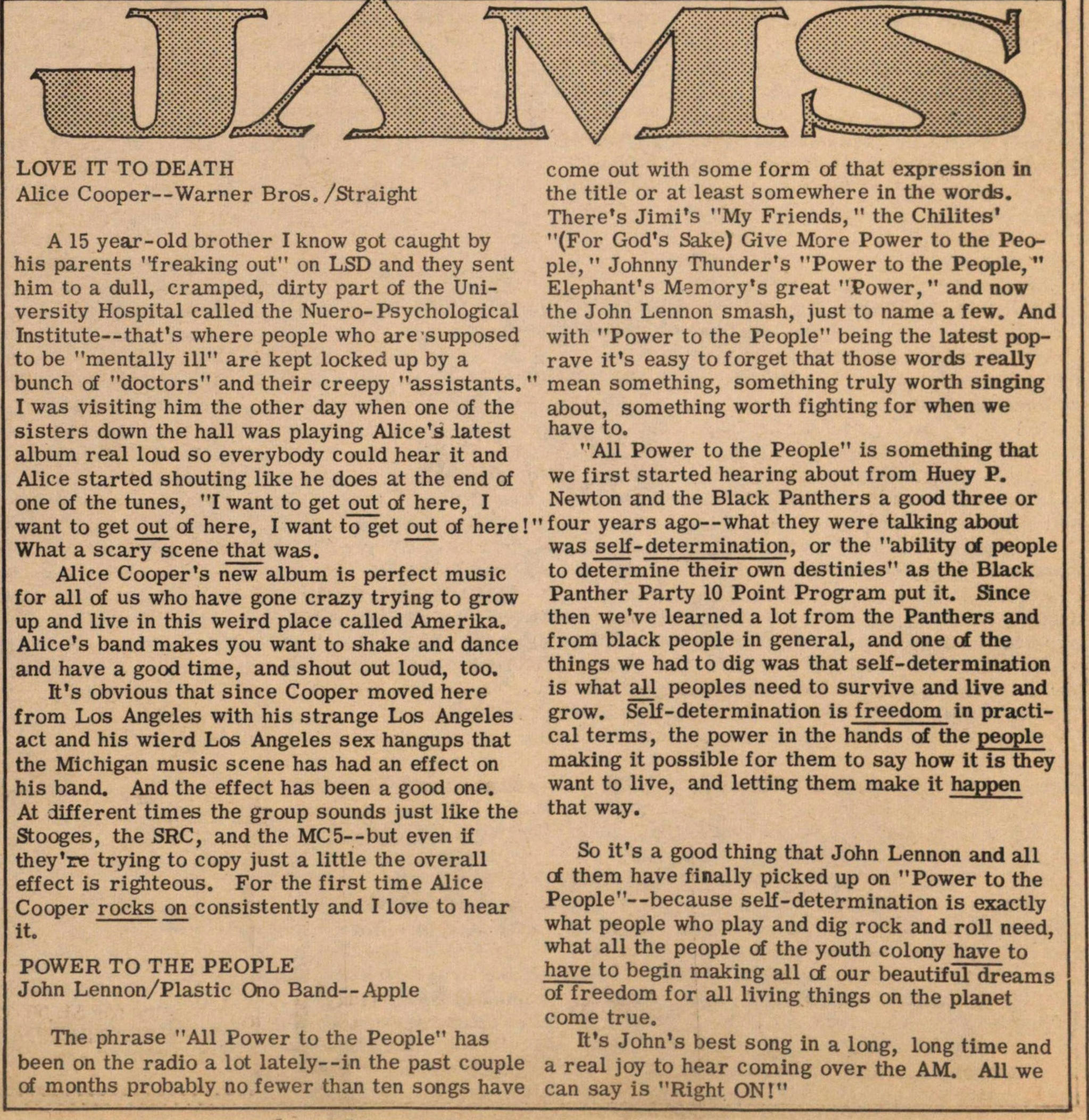 LOVE IT TO DEATH

Alice Cooper's new album is perfect music for all of us who have gone crazy trying to grow up and live in this weird place called America. Alice's band makes you want to shake and dance and have a good time, and shout out loud, too.

It's obvious that since Cooper moved here from Los Angles with his strange Los Angeles act and his weirdo Los Angeles sex hangups that the Michigan music scene has had an effect on his band. And the effect has been a good one.

At different times the group sounds just like the Stooges, the SRC, and the MC5 - but even if they're trying to copy just a little the overall effect is righteous. For the first time Alice Cooper rocks on consistently and I love to hear it.

The phrase "All Power to the People" has been on the radio a lot lately - in the past couple of months probably no fewer than ten songs have come out with some form of that expression in the title or at least somewhere in the words. There's Jimi's "My Friends," the Chilites' "(For God's Sake) Give More Power to the People," Johnny Thunder's "Power to the People," Elephant's Memory great "Power," and now the John Lennon smash, just to name a few. And with "Power to the People" being the latest pop-rave it's easy to forget that those word really mean something, something truly worth singing about, something worth fighting for when we have to.

"All Power to the People" is something that we first started hearing about from Huey P. Newton and the Black Panthers a good three or four years ago - what they were talking about was self-determination, or the "ability of people to determine their own destinies" as the Black Panther Party 10 Point Program put it. Since then we've learned a lot from the Panthers and from black people in general, and one of the things we had to dig was that self-determination is what all peoples need to survive and live and grow. Self-determination is freedom in practical terms, the power in the hands of the people making it possible for them to say how it is they want to live, and letting them make it happen that way.

So it's a good thing that John Lennon and all of them have finally picked up on "Power to the People" - because self-determination is exactly what people who play and dig rock and roll need, what all the people of the youth colony have to have to begin making all of our beautiful dreams of freedom for all living things on the planet come true.

It's John's best in a long, long time and a real joy to hear coming over the AM. All we can say is "Right ON!"