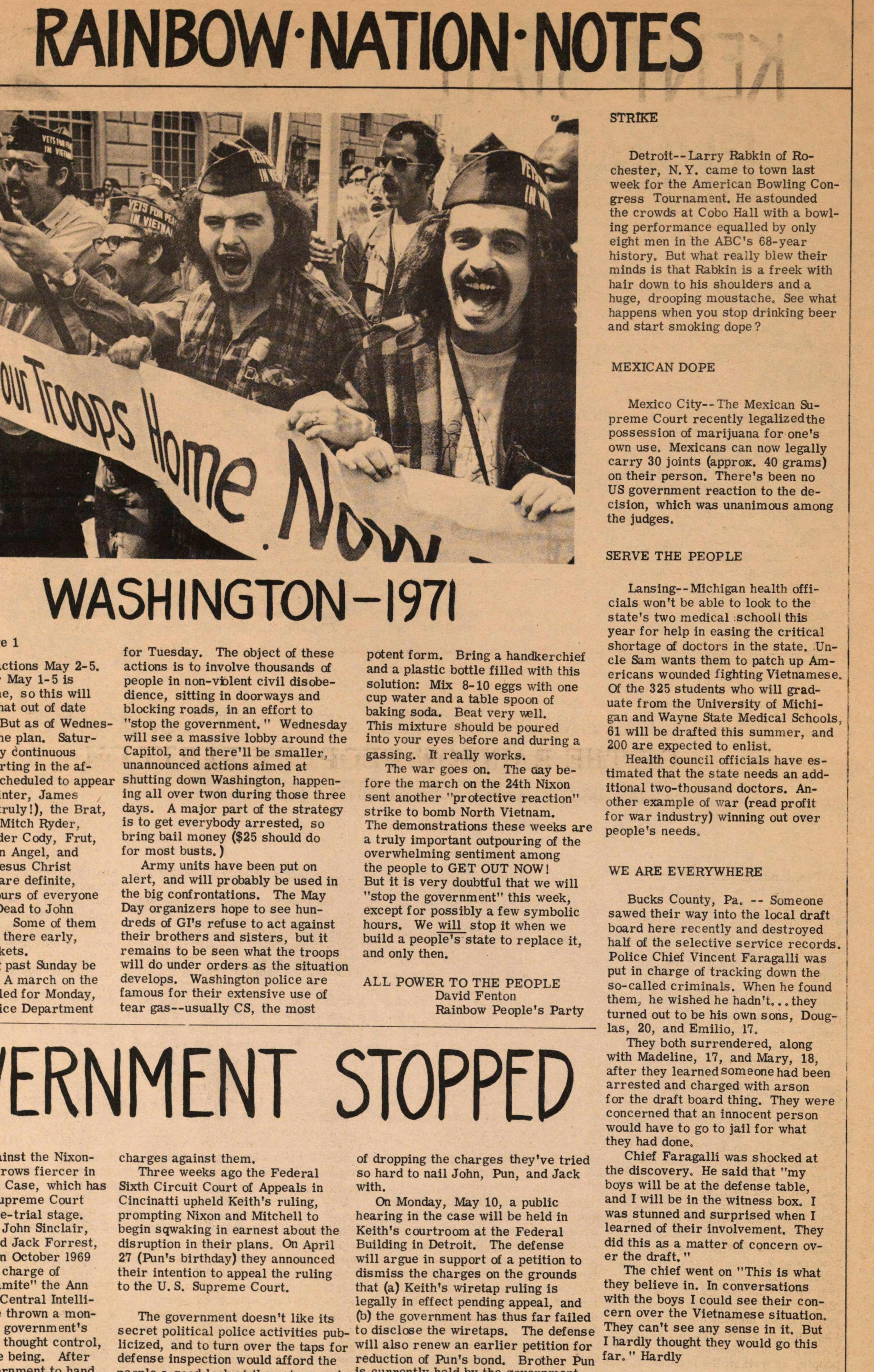 Detroit-- Larry Rabkin of Rochester, N.Y. carne to town last week for the American Bowling Congress Tournament. He astounded the crowds at Cobo Hall with a bowling performance equalled by only eight men in the ABC's 68-year history. But what really blew their minds is that Rabkin is a freek with hair down to his shoulders and a huge, drooping moustache. See what happens when you stop drinking beer and start smoking dope?

Mexico City-- The Mexican Supreme Court recently legalized the possession of marijuana for one's own use. Mexicans can now legally carry 30 joints (approx. 40 grams) on their person. There's been no US government reaction to the decisión, which was unanimous among the judges.

Lansing-- Michigan health officials won't be able to look to the state's two medical schooll this year for help in easing the critical shortage of doctors in the state. Uncle Sam wants them to patch up Americans wounded fighting Vietnamese. Of the 325 students who will graduate from the University of Michigan and Wayne State Medical Schools, 61 will be drafted this summer, and 200 are expected to enlist.

Health council officials have estimated that the state needs an additional two-thousand doctors. Another example of war (read profit for war industry) winning out over people's needs.

Bucks County, Pa.-- Someone sawed their way into the local draft board here recently and destroyed half of the selective service records. Police Chief Vincent Faragalli was put in charge of tracking down the so-called criminals. When he found them, he wished he hadn't. . . they turned out to be his own sons, Douglas, 20, and Emilio, 17. They both surrendered, along with Madeline, 17, and Mary, 18, after they learned someone had been arrested and charged with arson for the draft board thing. They were concerned that an innocent person would have to go to jail for what they had done.

Chief Faragalli was shocked at the discovery. He said that "my boys will be at the defense table, and I will be in the witness box. I was stunned and surprised when I learned of their involvement. They did this as a matter of concern over the draft."

The chief went on "This is what they believe in. In conversations with the boys I could see their concern over the Vietnamese situation. They can't see any sense in it. But I hardly thought they would go this far." Hardly