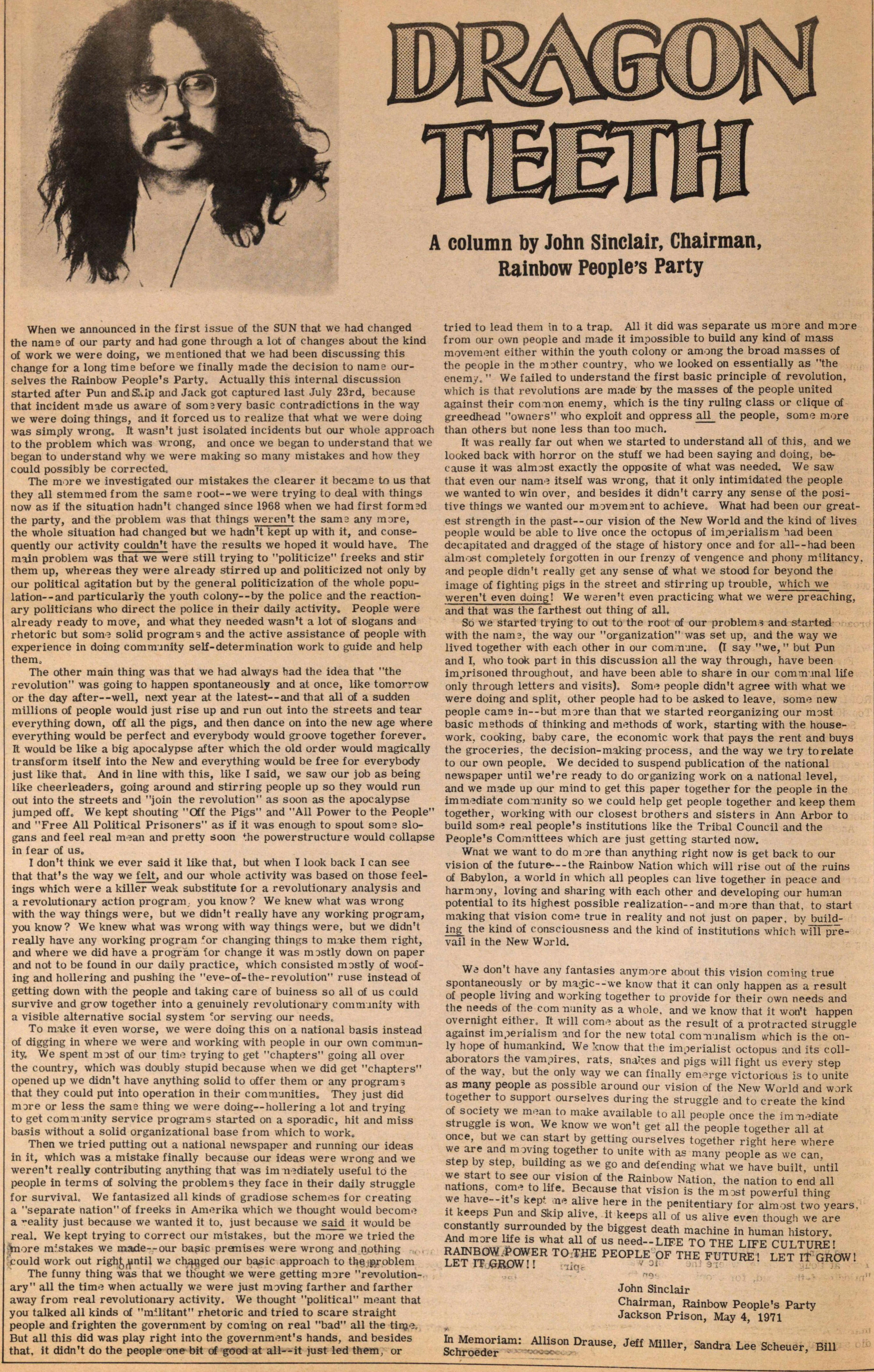 When we announced in the first issue of the SUN that we had changed the name of our party and had gone through a lot of changes about the kind of work we were doing, we mentioned that we had been discussing this change for a long time before we finally made the decision to name ourselves the Rainbow People's Party. Actually this internal discussion started after Pun and Skip and Jack got captured last July 23rd, because that incident made us aware of some very basic contradictions in the way we were doing things, and it forced us to realize that what we were doing was simply wrong. It wasn't just isolated incidents but our whole approach to the problem which was wrong, and once we began to understand that we began to understand why we were making so many mistakes and how they could possibly be corrected.

The more we investigated our mistakes the clearer it became to us that they all stemmed from the same root - we were trying to deal with things now as if the situation hadn't changed since 1968 when we had first formed the party, and the problem was that things weren't the same any mare, the whole situation had changed but we hadn't kept up with it, and consequently our activity couldn't have the results we hoped it would have, The miin problem was that we were still trying to "politicize" freeks and stir them up, whereas they were already stirred up and politicized not only by our political agitation but by the general politicization of the whole population - and particularly the youth colony - by the police and the reactionary politicians who direct the police in their daily activity. People were already ready to move, and what they needed wasn't a lot of slogans and rhetoric but some solid programs and the active assistance of people with experience in doing community self-determination work to guide and help them.

The other main thing was that we had always had the idea that "the revolution" was going to happen spontaneously and at once, like tomorrow or the day after -- well, next year at the latest -- and that all of a sudden millions of people would just rise up and run out into the streets and tear everything down, off all the pigs, and then dance on into the new age where everything would be perfect and everybody would groove together forever. It would be like a big apocalypse after which the old order would magically transform itself into the New and everything would be free for everybody just like that. And in line with this, like I said, we saw our job as being like cheerleaders, going around and stirring people up so they would run out into the streets and "join the revolution" as soon as the apocalypse jumped off. We kept shouting "Off the Pigs" and "All Power to the People" and "Free All Political Prisoners" as if it was enough to spout some slogans and feel real man and pretty soon the powerstructure would collapse in fear of us.

To make it even worse, we were doing this on a national basis instead of digging in where we were and working with people in our own community. We spent most of our time trying to get "chapters" going all over the country, which was doubly stupid because when we did get "chapters" opened up we didn't have anything solid to offer them or any programs that they could put into operation in their communities. They just did more or less the same thing we were doing - hollering a lot and trying to get community service programs started on a sporadic, hit and miss basis without a solid organizational base f rom which to work.

Then we tried putting out a national newspaper and running our ideas in it, which was a mistake finally because our ideas were wrong and we weren't really contributing anything that was immediately useful to the people in terms of solving the problems they face in their daily struggle for survival. We fantasized all kinds of gradiose schemes for creating a "separate nation"of freeks in Amerika which we thought would become a reality just because we wanted it to, just because we said it would be real. We kept trying to correct our mistakes, but the more we tried the more mistakes we made--our basic premises were wrong and nothing could work out right until we changed our basic approach to the problem.

The funny thing was that we thought we were getting more "revolutionary" all the time when actually we were just moving farther and farther away from real revolutionary activity. We thought "political" meant that you talked all kinds of "militant" rhetoric and tried to scare straight people and frighten the government by coming on real "bad" all the time. But all this did was play right into the government's hands, and besides that, it didn't do the people one bit of good at all - it just led them, or tried to lead them in to a trap. All it did was separate us more and more f rom our own people and made it impossible to build any kind of mass movement either within the youth colony or among the broad masses of the people in the mother country, who we looked on essentially as "the enemy. " We failed to understand the first basic principle of revolution, which is that revolutions are made by the masses of the people united against their common enemy, which is the tiny ruling class or clique of greedhead "owners" who exploit and oppress all the people, some more than others but none less than too much.

It was really far out when we started to understand all of this, and we looked back with horror on the stuff we had been saying and doing, because it was almost exactly the opposite of what was needed. We saw that even our name itself was wrong, that it only intimidated the people we wanted to win over, and besides it didn't carry any sense of the positive things we wanted our movement to achieve. What had been our greatest strength in the past -- our vision of the New World and the kind of lives people would be able to live once the octopus of imperialism had been decapitated and dragged of the stage of history once and for all -- had been almost completely forgotten in our frenzy of vengence and phony militancy. and people didn't really get any sense of what we stood for beyond the image of fighting pigs in the street and stirring up trouble, which we weren't even doing! We weren't even practicing what we were preaching, and that was the farthest out thing of all.

So we started trying to out to the root of our problem and started with the name, the way our "organization" was set up, and the way we lived together with each other in our commune. (I say "we, " but Pun and I, who took part in this discussion all the way through, have been imprisoned throughout, and have been able to share in our comminal life only through letters and visits). Some people didn't agree with what we were doing and split, other people had to be asked to leave, some new people came in -- but more than that we started reorganizing our most basic methods of thinking and methods of work, starting with the housework, cooking, baby care, the economic work that pays the rent and buys the groceries, the decision-making process, and the way we try to relate to our own people. We decided to suspend publication of the national newspaper until we're ready to do organizing work on a national level, and we made up our mind to get this paper together for the people in the immediate community so we could help get people together and keep them together, working with our closest brothers and sisters in Ann Arbor to build some real people's institutions like the Tribal Council and the People's Committees which are just getting started now.

What we want to do more than anything right now is get back to our vision of the future ---the Rainbow Nation which will rise out of the ruins of Babylon, a world in which all peoples can live together in peace and harmony, loving and sharing with each other and developing our human potential to its highest possible realization--and more than that, to start making that vision come true in reality and not just on paper, by building the kind of consciousness and the kind of institutions which will prevail in the New World.

We don't have any fantasies anymore about this vision coming true spontaneously or by magic -- we know that it can only happen as a result of people living and working together to provide for their own needs and the needs of the community as a whole, and we know that it won't happen overnight either. It will come about as the result of a protracted struggle against imperialism and for the new total communalism which is the only hope of humankind. We know that the imperialist octopus and its collaborators the vampires, rats, snakes and pigs will fight us every step of the way, but the only way we can finally emerge victorious is to unite as many people as possible around our vision of the New World and work together to support ourselves during the struggle and to create the kind of society we mean to make available to all people once the immediate struggle is won. We know we won't get all the people together all at once, but we can start by getting ourselves together right here where we are and moving together to unite with as many people as we can step by step, building as we go and defending what we have built, until we start to see our vision of the Rainbow Nation, the nation to end all nations, come to life. Because that vision is the most powerful thing we have -- it's kept me alive here in the penitentiary for almost two years, it keeps Pun and Skip alive, it keeps all of us alive even though we are constantly surrounded by the biggest death machine in human history. And more life is what all of us need-- LIFE TO THE LIFE CULTURE! RAINBOW POWER TO THE PEOPLE OF THE FUTURE! LET IT GROW! LET IT GROW!!