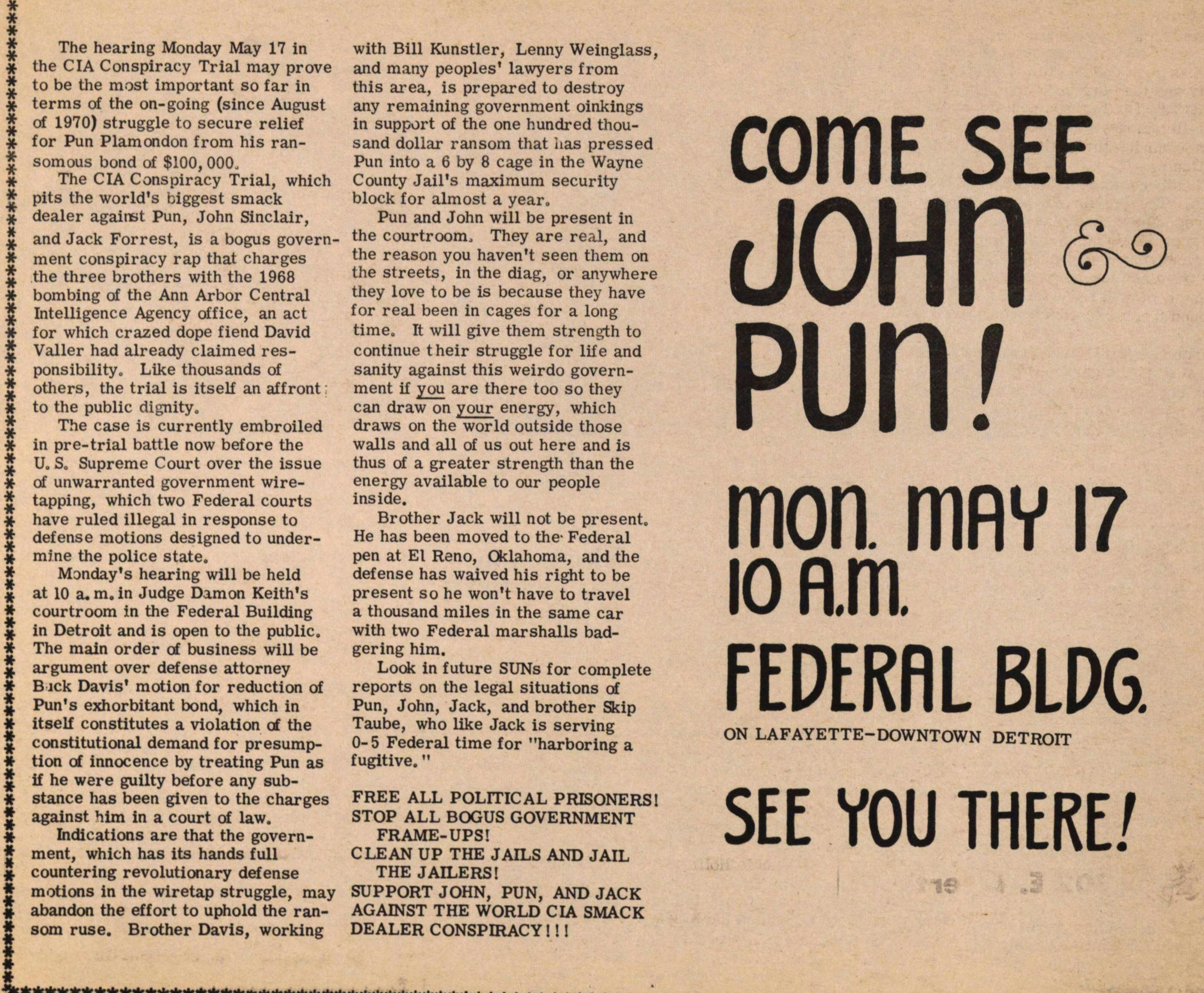 mon mnv 17 loam FEDERRL BLDG. ON LAFAYETTE-DOWNTOWN DETROIT SEE YOU THERE -te The hearing Monday May 17 in K the CIA Conspiracy Trial may prove ï to be the most important so far in It terms of the on-going (since August of 1970) struggle to secure relief t for Pun Plamondon from his ranÊ somous bond of $100, 000. The CIA Conspiracy Trial, which jL pits the world's biggest smack dealer against Pun, John Sinclair, f and Jack Forrest, is a bogus governi ment conspiracy rap that charges the three brothers with the 1968 bombing of the Ann Arbor Central % Intelligence Agency office, an act for which crazed dope fiend David J Valler had already claimed res ponsibility. Like thousands of J others, the trial is itself an affront: to the public dignity„ J The case is currently embroiled in pre-trial battle now before the $ U„ S„ Supreme Court over the issue ft of unwarranted government wire tapping, which two Federal courts ft have ruled illegal in response to defense motions designed to under mine the pólice state. Monday's hearing will be held at 10 a. m. in Judge Damon Keith's courtroom in the Federal Building $ in Detroit and is open to the public. The main order of business will be g argument over defense attorney B ïck Davis' motion for reduction of 5 Pun's exhorbitant bond, which in itself constitutes a violation of the constitutional demand for presump tion of innocence by treating Pun as J if he were guilty before any sub stance has been given to the charges J against him in a court of law. Indications are that the govern ment, which has its hands f uil ft countering revolutionary defense motions in the wiretap struggle, may abandon the eff ort to uphold the ran som ruse. Brother Davis, working I with Bill Kunstier, Lenny Weinglass, and many peoples' lawyers f rom this area, is prepared to destroy any remaining government oinkings in support of the one hundred thousand dollar ransom that has pressed Pun into a 6 by 8 cage in the Wayne County Jail's maximum security block for almost a year. Pun and John will be present in the courtroom, They are real, and the reason you haven't seen them on the streets, in the diag, or anywhere they love to be is because they have for real been in cages for a long time. It will give them strength to continue their struggle for life and sanity against this weirdo government if you are there too so they can draw on your energy, which draws on the world outside those walls and all of us out here and is thus of a greater strength than the energy available to our people inside. Brother Jack will not be present. He has been moved to Federal pen at El Reno, Oklahoma, and the dei ense has waived nis right to be present so he won't have to travel a thousand miles in the same car with two Federal marshalls badgering him. Look in future SUNs for complete reports on the legal situations of Pun, John, Jack, and brother Skip Taube, who like Jack is serving 0-5 Federal time for "harboring a fugitive. " FREE ALL POLITICAL PRBONERS! STOP ALL BOGUS GOVERNMENT UPS! CLEAN UP THE JAILS AND JAIL THE JAILERS! SUPPORT JOHN, PUN, AND JACK AGAINST THE WORLD CIA SMACK DEALER CONSPIRACY ! ! I _ m _■_ _ _ _■_ _■ .