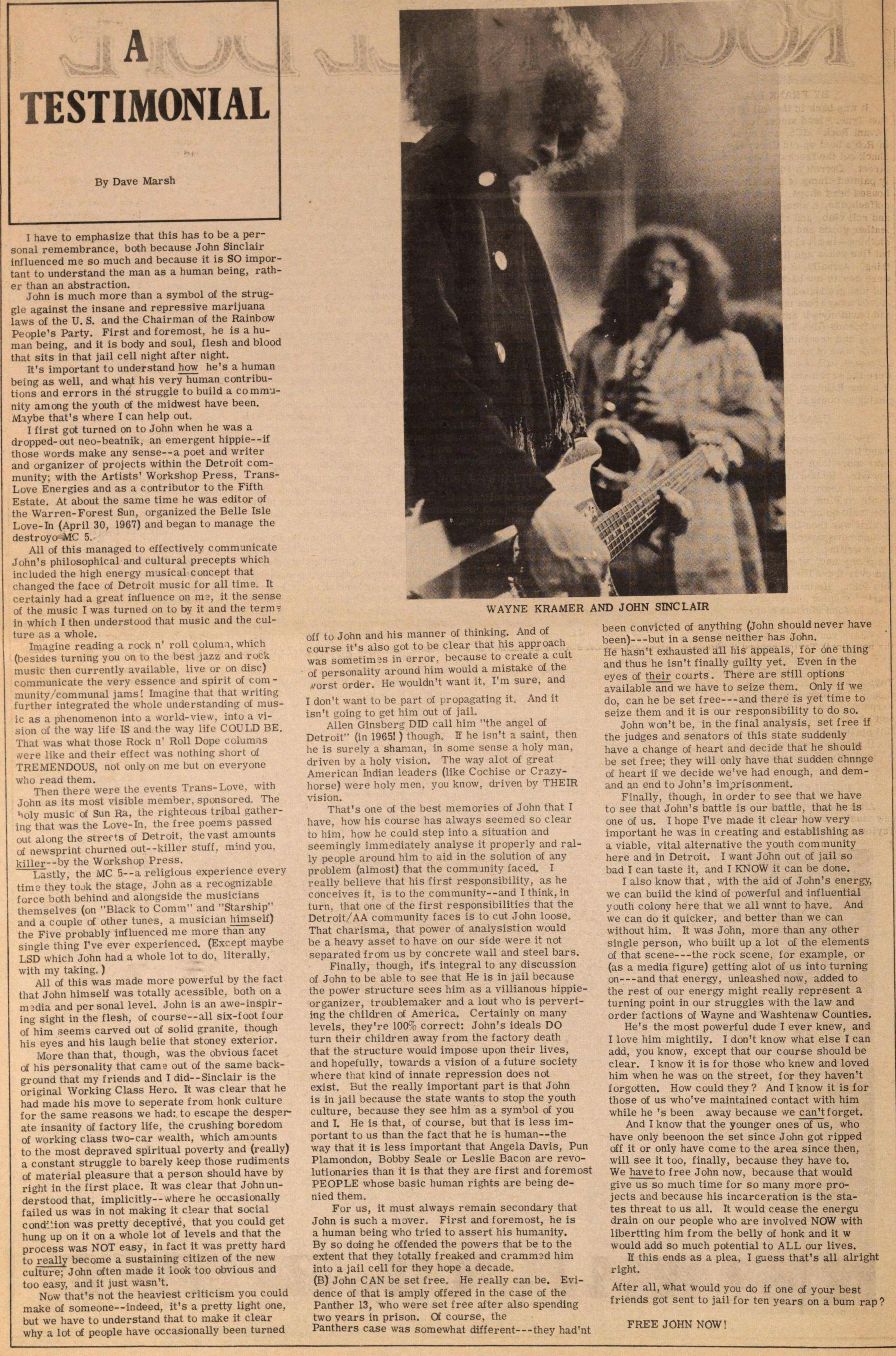 I have to emphasize that this has to be a personal remembrance, both because John Sinclair influenced me so much and because it is SO important to understand the man as a human being, rather than an abstraction.

John is much more than a symbol of the struggle against the insane and repressive marijuana laws of the U. S. and the Chairman of the Rainbow People's Party. First and foremost, he is a human being, and it is body and soul, flesh and blood that sits in that jail cell night after night.

It's important to understand how he's a human being as well, and what his very human contributions and errors in the struggle to build a community among the youth of the midwest have been. Maybe that's where I can help out.

I first got turned on to John when he was a dropped-out neo-beatnik, an emergent hippie - if those words make any sense - a poet and writer and organizer of projects within the Detroit community; with the Artists' Workshop Press, Trans-Love Energies and as a contributor to the Fifth Estate. At about the same time he was editor of the Forest Sun, organized the Belle Isle Love-In (April 30, 1967) and began to manage the destroyo MC 5.

All of this managed to effectively communicate John's philosophical and cultural precepts which included the high energy musical concept that changed the face of Detroit music for all time. It certainly had a great influence on me, it the sense of the music I was turned on to by it and the terms in which I then understood that music and the culture as a whole.

Imagine reading a rock n' roll column, which (besides turning you on to the best jazz and rock music then currently available, live or on disc) communicate the very essence and spirit of community/communal jams! Imagine that that writing further integrated the whole understanding of music as a phenomenon into a world-view, into a vision of the way life IS and the way life COULD BE. That was what those Rock n' Roll Dope columns were like and their effect was nothing short of TREMENDOUS, not only on me but on everyone who read them.

Then there were the events Trans-Love, with John as its most visible member, sponsored. The holy music of Sun Ra, the righteous tribal gathering that was the Love-In, the free poems passed out along the streets of Detroit, the vast amounts of newsprint churned out - killer stuff, mind you, killer - by the Workshop Press.

Lastly, the MC 5 - a religious experience every time they took the stage, John as a recognizable force both behind and alongside the musicians themselves (on "Black to Comm" and "Starship" and a couple of other tunes, a musician himself) the Five probably influenced me more than any single thing I've ever experienced. (Except maybe LSD which John had a whole lot to do, literally, with my taking.)

All of this was made more powerful by the fact that John himself was totally acessible, both on a media and personal level. John is an awe-inspiring sight in the flesh, of course - all six-foot four of him seems carved out of solid granite, though his eyes and his laugh belie that stoney exterior.

More than that, though, was the obvious facet of his personality that came out of the same background that my friends and I did - Sinclair is the original Working Class Hero. It was clear that he had made his move to seperate from honk culture for the same reasons we had: to escape the desperate insanity of factory life, the crushing boredom of working class two-car wealth, which amounts to the most depraved spiritual poverty and (really) a constant struggle to barely keep those rudiments of material pleasure that a person should have by right in the first place. It was clear that John understood that, implicitly - where he occasionally failed us was in not making it clear that social condition was pretty deceptive, that you could get hung up on it on a whole lot of levels and that the process was NOT easy, in fact it was pretty hard to really become a sustaining citizen of the new culture; John often made it look too obvious and too easy, and it just wasn't.

Now that's not the heaviest criticism you could make of someone - indeed, it's a pretty light one, but we have to understand that to make it clear why a lot of people have occasionally been turned off to John and his manner of thinking. And of course it's also got to be clear that his approach was sometimes in error, because to create a cult of personality around him would a mistake of the worst order. He wouldn't want it, I'm sure, and I don't want to be part of propagating it. And it isn't going to get him out of jail.

Allen Ginsberg DID call him "the angel of Detroit" (in 1965! ) though. If he isn't a saint, then he is surely a shaman, in some sense a holy man, driven by a holy vision. The way alot of great American Indian leaders (like Cochise or Crazy-horse) were holy men, you know, driven by THEIR vision.

That's one of the best memories of John that I have, how his course has always seemed so clear to him, how he could step into a situation and seemingly immediately analyse it properly and rally people around him to aid in the solution of any problem (almost) that the community faced. I really believe that his first responsibility, as he conceives it, is to the community - and I think, in turn, that one of the first responsibilities that the Detroit/AA community faces is to cut John loose. That charisma, that power of analysistion would be a heavy asset to have on our side were it not separated from us by concrete wall and steel bars.

Finally, though, if s integral to any discussion of John to be able to see that He is in jail because the power structure sees him as a villianous hippie-organizer, troublemaker and a lout who is perverting the children of America. Certainly on many levels, they're 100% correct: John's ideals DO turn their children away from the factory death that the structure would impose upon their lives, and hopefully, towards a vision of a future society where that kind of innate repression does not exist. But the really important part is that John is in jail because the state wants to stop the youth culture, because they see him as a symbol of you and I. He is that, of course, but that is less important to us than the fact that he is human - the way that it is less important that Angela Davis, Pun Plamondon, Bobby Seale or Leslie Bacon are revolutionaries than it is that they are first and foremost PEOPLE whose basic human rights are being denied them.

For us, it must always remain secondary that John is such a mover. First and foremost, he is a human being who tried to assert his humanity. By so doing he offended the powers that be to the extent that they totally freaked and crammed him into a jail cell for they hope a decade.

John CAN be set free. He really can be. Evidence of that is amply offered in the case of the Panther 13, who were set free after also spending two years in prison. Of course, the Panthers case was somewhat different - they had'nt been convicted of anything (John should never have been) - but in a sense neither has John. He hasn't exhausted all his appeals, for one thing and thus he isn't finally guilty yet. Even in the eyes of their courts. There are still options available and we have to seize them. Only if we do, can he be set free - and there is yet time to seize them and it is our responsibility to do so.

John won't be, in the final analysis, set free if the judges and senators of this state suddenly have a change of heart and decide that he should be set free; they will only have that sudden change of heart if we decide we've had enough, and demand an end to John's imprisonment.

Finally, though, in order to see that we have to see that John's battle is our battle, that he is one of us. I hope I've made it clear how very important he was in creating and establishing as a viable, vital alternative the youth community here and in Detroit. I want John out of jail so bad I can taste it, and I KNOW it can be done.

I also know that, with the aid of John's energy, we can build the kind of powerful and influential youth colony here that we all want to have. And we can do it quicker, and better than we can without him. It was John, more than any other single person, who built up a lot of the elements of that scene - the rock scene, for example, or (as a media figure) getting alot of us into turning on - and that energy, unleashed now, added to the rest of our energy might really represent a turning point in our struggles with the law and order factions of Wayne and Washtenaw Counties.

He's the most powerful dude I ever knew, and I love him mightily. I don't know what else I can add, you know, except that our course should be clear. I know it is for those who knew and loved him when he was on the street, for they haven't forgotten. How could they? And I know it is for those of us who've maintained contact with him while he 's been away because we can't forget.

And I know that the younger ones of us, who have only beenoon the set since John got ripped off it or only have come to the area since then, will see it too, finally, because they have to. We have to free John now, because that would give us so much time for so many more projects and because his incarceration is the states threat to us all. It would cease the energy drain on our people who are involved NOW with libertting him from the belly of honk and it would add so much potential to ALL our lives.

If this ends as a plea, I guess that's all alright right.

After all, what would you do if one of your best friends got sent to jail for ten years on a bum rap?