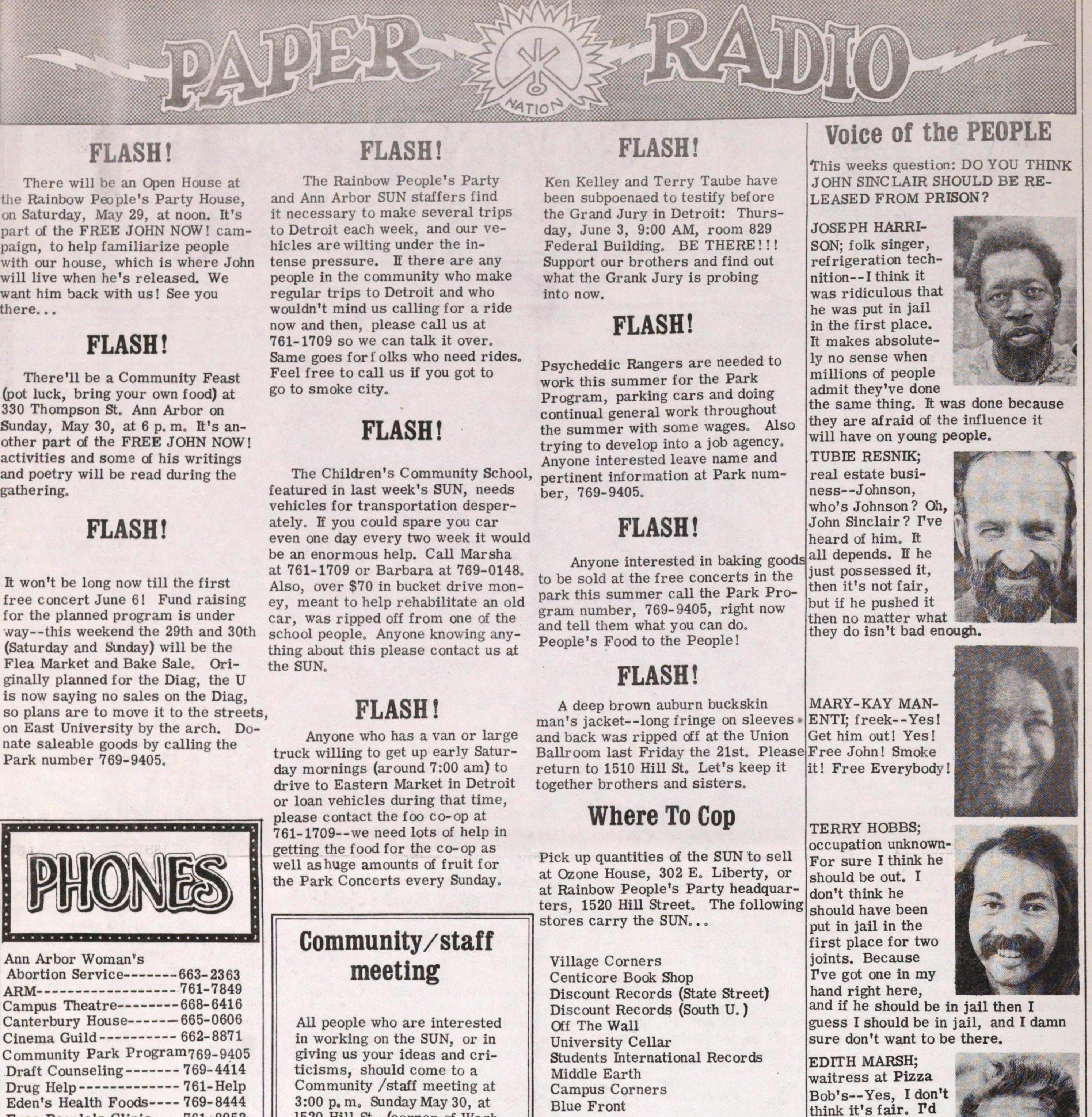 There will be an Open House at tlie Rainbow People's Party House, on Saturday, May 29, at noon. It's part of the FREE JOHN NOW ! campaign, to help familiarize people with our house, which is where John will live when he's released. We want him back with us ! See you there. . . FLASH! There'll be a Community Feast (pot luck, bring your own food) at 330 Thompson St. Ann Arbor on Sunday, May 30, at 6 p. m. It's another part of the FREE JOHN NOW ! activities and some of his writings and poetry will be read during the gathering. FLASH! It won't be long now till the first free concert June 6! Fund raising for the planned program is under way - this weekend the 29th and 30th (Saturday and Stnday) will be the Flea Market and Bake Sale. Originally planned for the Diag, the U is now saying no sales on the Diag, so plans are to move it to the streets, on East University by the arch. Donate saleable goods by calling the Park number 769-9405. FLASH! The Rainbow People's Party and Ann Arbor SUN staffers find it necessary to make several trips to Detroit each week, and our vehicles arewilting under the intense pressure. 1 there are any people in the community who make regular trips to Detroit and who wouldn't mind us calling for a ride now and then, please cali us at 761-1709 so we can talk it over. Same goes for t olks who need rides. Feel free to cali us if you got to go to smoke city. FLASH! The Children's Community School featured in last week's SUN, needs vehicles for transportation desperately. ïï you could spare you car even one day every two week it woulc be an enormous help. Cali Marsha at 761-1709 or Barbara at 769-0148. Also, over $70 in bucket drive money, meant to help rehabilitate an old car, was ripped off from one of the school people. Anyone knowing anything about this please contact us at the SUN. FLASH! Anyone who has a van or large truck willing to get up early Saturday mornings (around 7:00 am) to drive to Eastern Market in Detroit or loan vehicles during that time, please contact the foo co-op at 761-1709--we need lots of help in getting the food for the co-op as well ashuge axnounts of fruit for the Park Concerts every Sunday. FLASH! Ken Kelley and Terry Taube have been subpoenaed to testify bef ore the Grand Jury in Detroit: Thursday, June 3, 9:00 AM, room 829 Federal Building. BE THERE ! ! ! Support our brothers and find out what the Grank Jury is probing into now. FLASH! Psychedelic Rangers are needed to work this summer f or the Park Program, parking cars and doing continual general work throughout the summer with some wages. Also trying to develop into a job agency. Anyone interested leave name and pertinent information at Park number, 769-9405. , FLASH! Anyone interested in baking goods to be sold at the free concerts in the park this summer cali the Park Program number, 769-9405, right now and teil them what you can do. People's Food to the People! FLASH! A deep brown auburn buckskin man's jacket--long fringe on sleeves and back was ripped off at the Union Ballroom last Friday the 21st. Please return to 1510 Hill St. Let's keep it together brothers and sisters. Where To Cop Piek up quantities of the SUN to sell at Ozone House, 302 E„ Liberty, or at Rainbow People's Party headquarters, 1520 Hill Street. The following stores carry the SUN. . . Village Corners Centicore Book Shop Discount Records (State Street) Discount Records (South U. ) f The Wall University Cellar Students International Records Middle Earth Campus Corners Blue Front