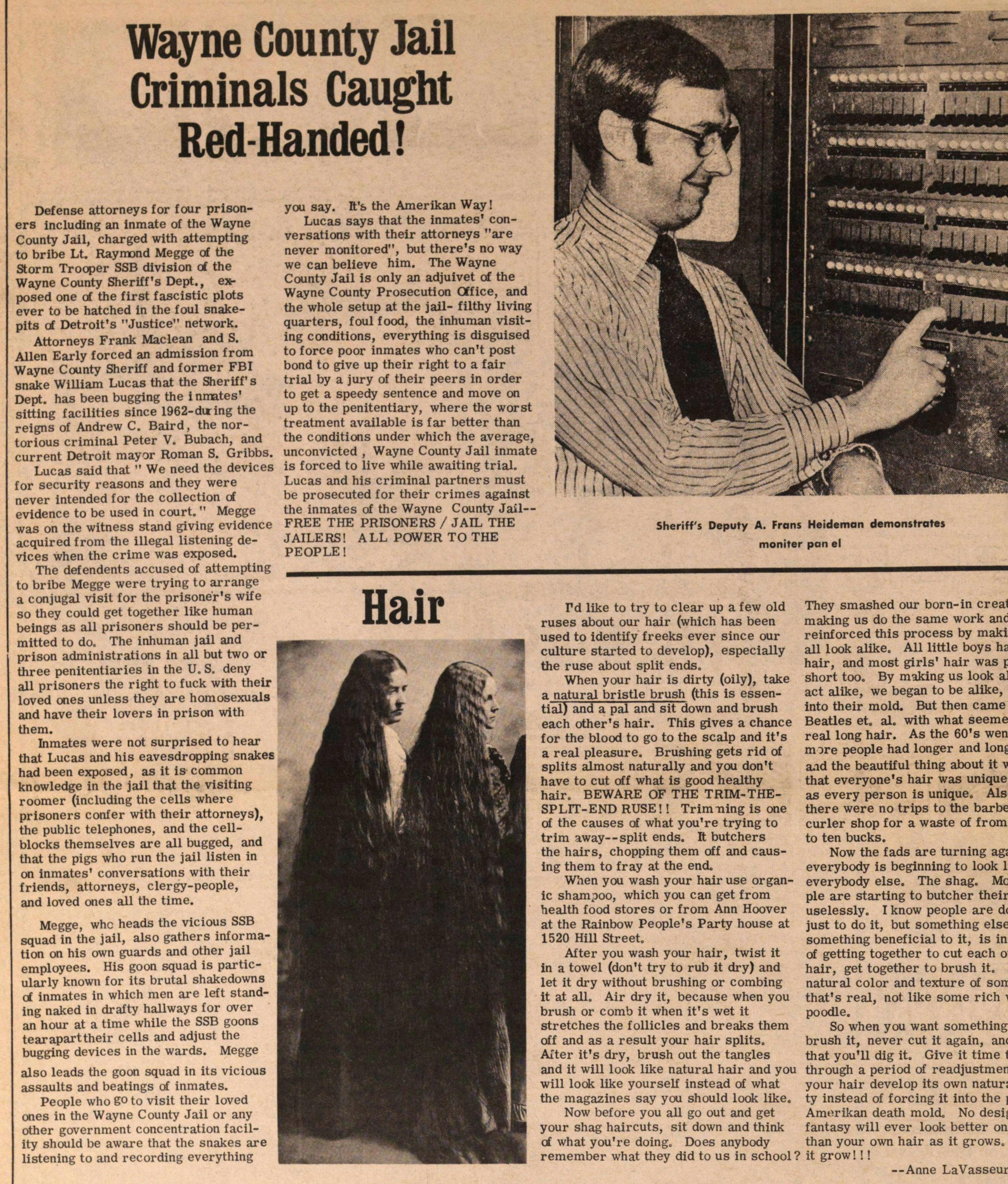 Defense attorneys for four prisoners including an inmate of the Wayne County Jail, charged with attempting to bribe Lt. Raymond Megge of the Storm Trooper SSB división of the Wayne County Sheriff 's Dept., exposed one of the first fascistic plots ever to be hatched in the foul snakepits of Detroit's "Justice" network. Attorneys Frank Maclean and S. Allen Early forced an admission from Wayne County Sheriff and former FBI snake William Lucas that the Sheriff' s Dept. has been bugging the i nmates' sitting facilities since dur ing the reigns of Andrew C. Baird, the nortorious criminal Peter V. Bubach, and current Detroit mayor Roman S. Gribbs. Lucas said that " We need the devices for security reasons and they were never intended for the collection of evidence to be used in court. " Megge was on the witness stand giving evidence acquired from the illegal listening devices when the crime was exposed. The def endents accused of attempting to bribe Megge were trying to arrange a conjugal visit for the prisonér's wife so they could get together like human beings as all prisoners should be permitted to do. The inhuman jail and prison administrations in all but two or three penitentiaries in the U. S. deny all prisoners the right to fuck with their loved ones unless they are homosexuals and have their lovers in prison with them. Inmates were not surprised to hear that Lucas and his eavesdropping snakes had been exposed , as it is common knowledge in the jail that the visiting roomer (including the cells where prisoners confer with their attorneys), the public telephones, and the cellblocks themselves are all bugged, and that the pigs who run the jail listen in on inmates' conversations with their friends, attorneys, clergy-people, and loved ones all the time. Megge, whc heads the vicious SSB squad in the jail, also gathers information on his own guards and other jail employees. His goon squad is particular ly known for its brutal shakedowns of inmates in which men are left standing naked in drafty hallways for over an hour at a time while the SSB goons tearaparttheir cells and adjust the bugging devices in the wards. Megge also leads the goon squad in its vicious assaults and beatings of inmates. People who go to visit their loved ones in the Wayne County Jail or any other government concentration facility should be aware that the snakes are listening to and recording everything you say. tt's the Amerikan Way ! Lucas says that the inmates' conversations with their attorneys "are never monitored", but there's no way we can believe him. The Wayne County Jail is only an adjuivet af the Wayne County Prosecution Office, and the whole setup at the filthy living quarters, foul f ood, the inhuman visiting conditions, everything is disguised to force poor inmates who can't post bond to give up their right to a fair trial by a jury of their peers in order to get a speedy sentence and move on up to the penitentiary, where the worst treatment available is far better than the conditions under which the average, unconvicted , Wayne County Jail inmate is forced to live while awaiting trial. Lucas and his criminal partners must be prosecuted for their crimes against the inmates of the Wayne County Jail- FREE THE PRISONERS JAIL THE JAILERS! ALL POWER TO THE PEOPLE !