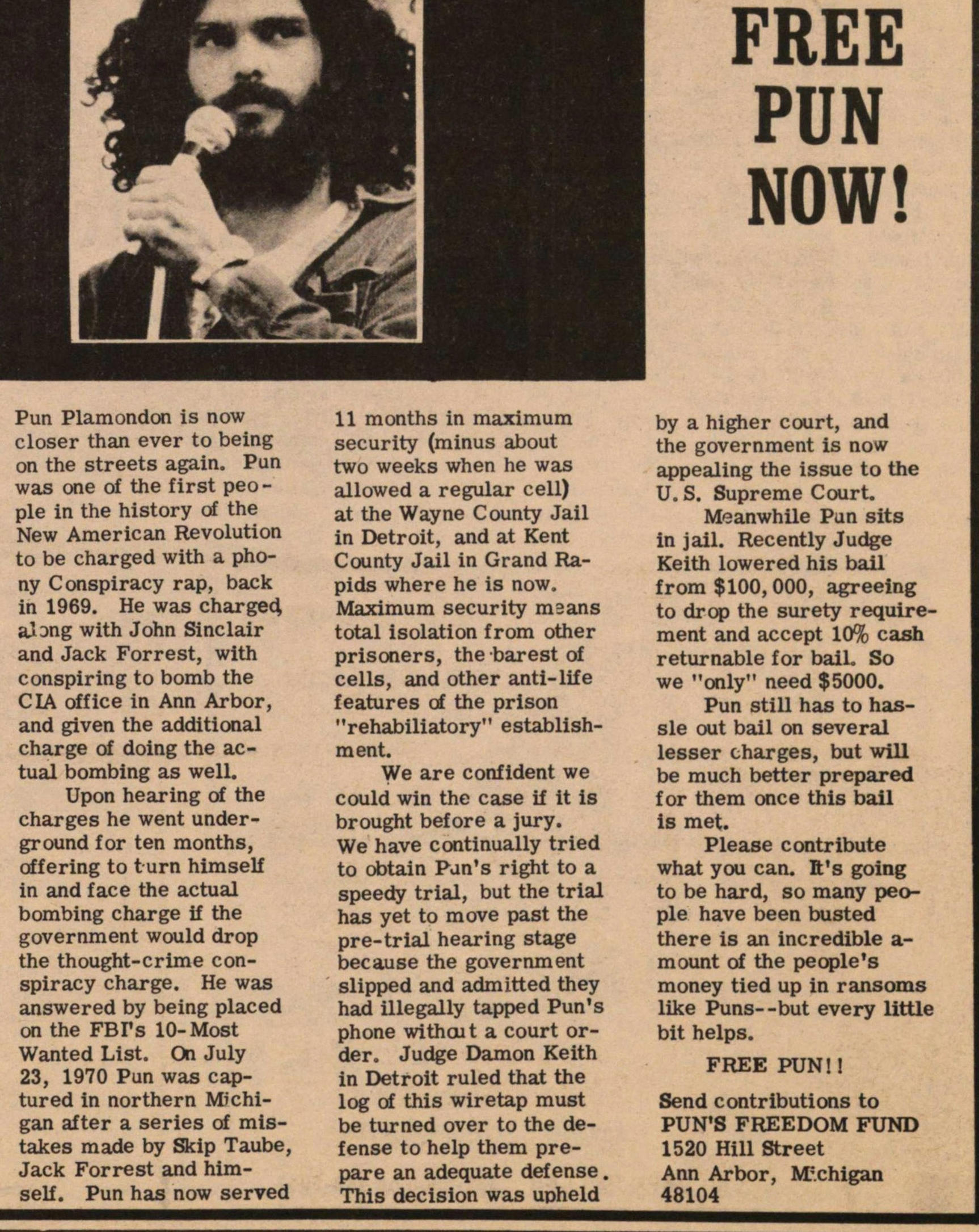 Pun Plamondon is now closer than ever to being on the streets again. Pun was one of the first people in the history of the New American Revolution to be charged with a phony Conspiracy rap, back in 1969. He was charged, along with John Sinclair and Jack Forrest, with conspiring to bomb the CIA office in Ann Arbor, and given the additional charge of doing the actual bombing as well.

Upon hearing of the charges he went underground for ten months, offering to turn himself in and face the actual bombing charge if the government would drop the thought-crime conspiracy charge. He was answered by being placed on the FBIs 10-Most Wanted List. On July 23, 1970 Pun was captured in northern Michigan after a series of mistakes made by Skip Taube, Jack Forrest and himself. Pun has now served 11 months in maximum security (minus about two weeks when he was allowed a regular cell) at the Wayne County Jail in Detroit, and at Kent County Jail in Grand Rapids where he is now. Maximum security means total isolation from other prisoners, the barest of cells, and other anti-life features of the prison "rehabiliatory" establishment.

We are confident we could win the case if it is brought before a jury. We have continually tried to obtain Pun's right to a speedy trial, but the trial has yet to move past the pre-trial hearing stage because the government slipped and admitted they had illegally tapped Pun's phone without a court order. Judge Damon Keith in Detroit ruled that the log of this wiretap must be turned over to the defense to help them prepare an adequate defense. This decision was upheld by a higher court, and the government is now appealing the issue to the U.S. Supreme Court.

Meanwhile Pun sits in jail. Recently Judge Keith lowered his bail from $100,000, agreeing to drop the surety requirement and accept 10% cash returnable for bail. So we "only" need $5000.

Pun still has to hassle out bail on several lesser charges, but will be much better prepared for them once this bail is met.

Please contribute what you can. It's going to be hard, so many people have been busted there is an incredible amount of the people's money tied up in ransoms like Puns--but every little bit helps.