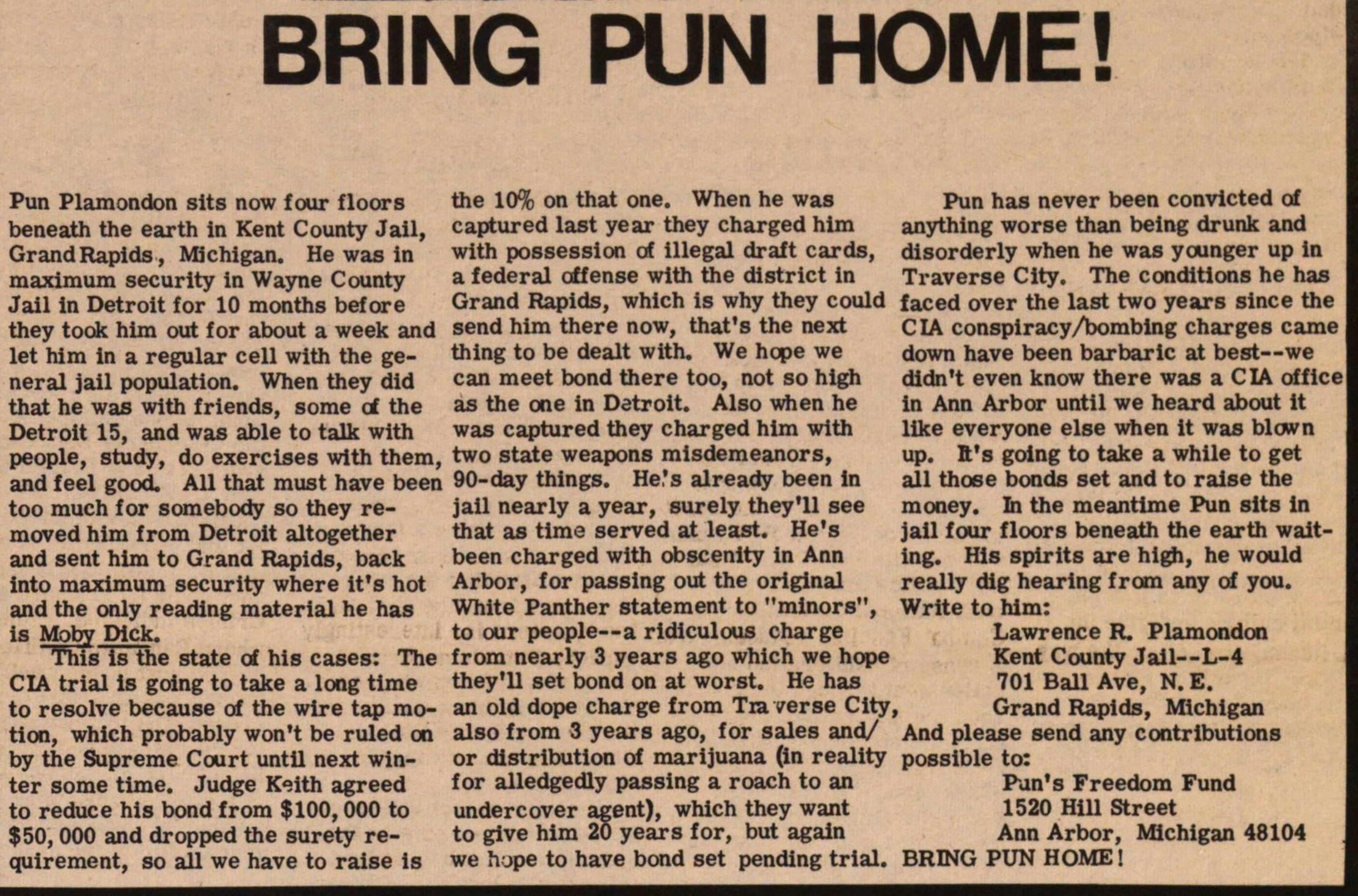 Pun Plamondon sits now four floors beneath the earth in Kent County Jail, Grand Rapids, Michigan. He was in maximum security in Wayne County Jail in Detroit for 10 months before they took him out for about a week and let him in a regular cell with the general jail population. When they did that he was with friends, some of the Detroit 15, and was able to talk with people, study, do exercises with them, and feel good. All that must have been too much for somebody so they removed him from Detroit altogether and sent him to Grand Rapids, back into maximum security where it's hot and the only reading material he has is Moby Dick.

This is the state of his cases: The CIA trial is going to take a long time to resolve because of the wire tap motion, which probably won 't be ruled on by the Supreme Court until next winter some time. Judge Keith agreed to reduce his bond from $100,000 to $50,000 and dropped the surety requirement, so all we have to raise is the 10% on that one. When he was captured last year they charged him with possession of illegal draft cards, a federal offense with the district in Grand Rapids, which is why they could send him there now, that's the next thing to be dealt with. We hope we can meet bond there too, not so high as the one in Detroit. Also when he was captured they charged him with two state weapons misdemeanors, 90-day things. He's already been in jail nearly a year, surely they'll see that as time served at least. He's been charged with obscenity in Ann Arbor, for passing out the original White Panther statement to "minors", to our people- a ridiculous charge from nearly 3 years ago which we hope they'll set bond on at worst. He has an old dope charge from Traverse City, also from 3 years ago, for sales and/or distribution of marijuana (in reality for allegedly passing a roach to an undercover agent), which they want to give him 20 years for, but again we hope to have bond set pending trial.

Pun has never been convicted of anything worse than being drunk and disorderly when he was younger up in Traverse City. The conditions he has faced over the last two years since the CIA conspiracy/bomblng charges came down have been barbaric at best -- we didn't even know there was a CIA office in Ann Arbor until we heard about it like everyone else when it was blown up. It's going to take a while to get all those bonds set and to raise the money. In the meantime Pun sits in jail four floors beneath the earth waiting. His spirits are high, he would really dig hearing from any of you.

And please send any contributions possible to: