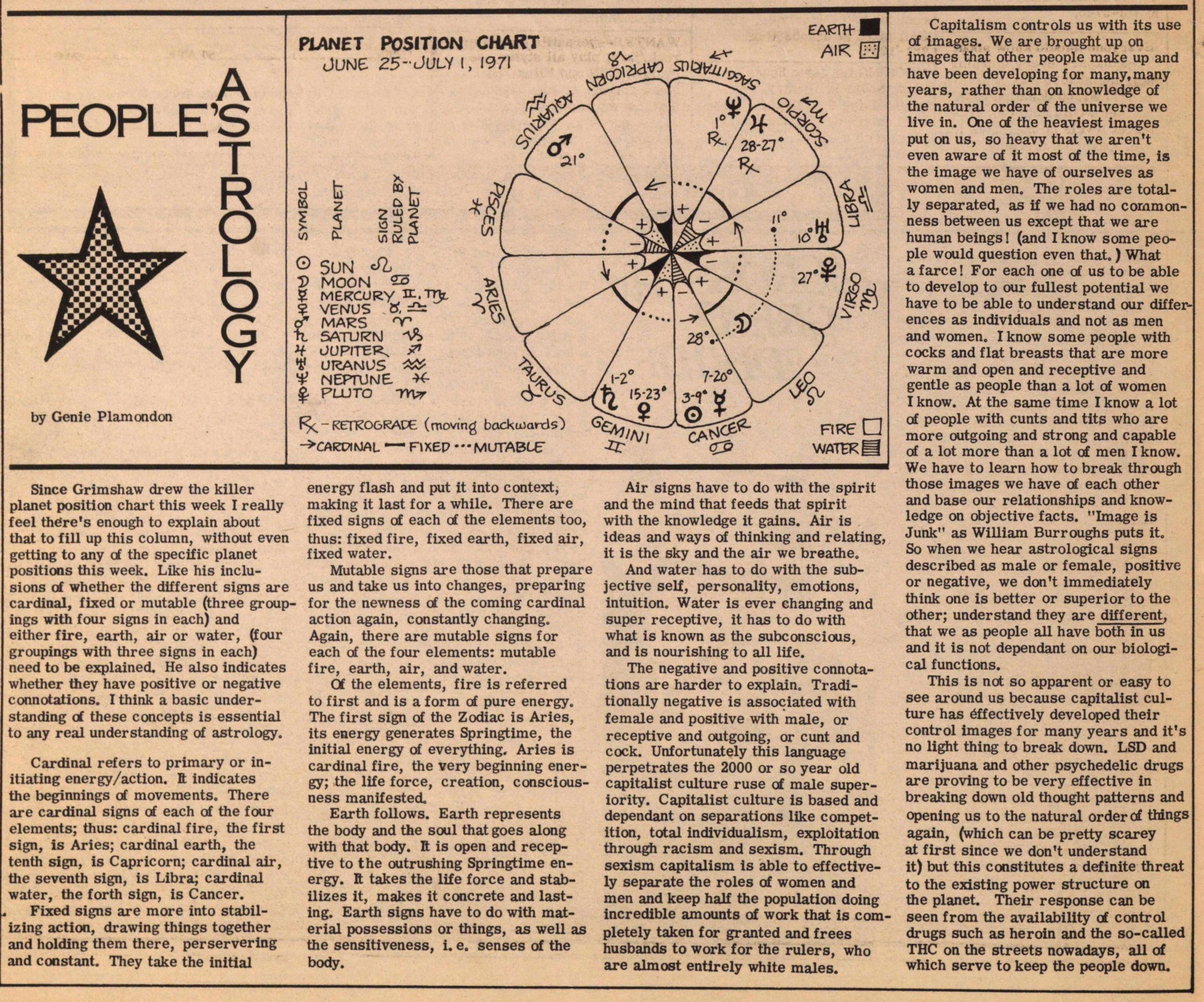 Since Grimshaw drew the killer planet position chart this week I really feel there's enough to explain about that to fill up this column, without even getting to any of the specific planet positions this week. Like his inclusions of whether the different signs are cardinal, fixed or mutable (three groupings with four signs in each) and either fire, earth, air or water, (four groupings with three signs in each) need to be explained. He also indicates whether they have positive or negative connotations. I think a basic understanding of these concepts is essential to any real understanding of astrology.

Cardinal refers to primary or initiating energy/action. It indicates the beginnings of movements. There are cardinal signs of each of the four elements; thus: cardinal fire, the first sign, is Aries; cardinal earth, the tenth sign, is Capricorn; cardinal air, the seventh sign, is Libra; cardinal water, the forth sign, is Cancer.

Fixed signs are more into stabilizing action, drawing things together and holding them there, persevering and constant. They take the initial energy flash and put it into context, making it last for a while. There are fixed signs of each of the elements too, thus: fixed fire, fixed earth, fixed air, fixed water.

Mutable signs are those that prepare us and take us into changes, preparing for the newness of the coming cardinal action again, constantly changing. Again, there are mutable signs for each of the four elements: mutable fire, earth, air, and water.

Of the elements, fire is referred to first and is a form of pure energy. The first sign of the Zodiac is Aries, its energy generates Springtime, the initial energy of everything. Aries is cardinal fire, the very beginning energy; the life force, creation, consciousness manifested.

Earth follows. Earth represents the body and the soul that goes along with that body. It is open and receptive to the out-rushing Springtime energy. It takes the life force and stabilizes it, makes it concrete and lasting. Earth signs have to do with material possessions or things, as well as the sensitiveness, i. e. senses of the body.

Air signs have to do with the spirit and the mind that feeds that spirit with the knowledge it gains. Air is ideas and ways of thinking and relating, it is the sky and the air we breathe.

And water has to do with the subjective self, personality, emotions, intuition. Water is ever changing and super receptive, it has to do with what is known as the subconscious, and is nourishing to all life.

The negative and positive connotations are harder to explain. Traditionally negative is associated with female and positive with male, or receptive and outgoing, or cunt and cock. Unfortunately this language perpetrates the 2000 or so year old capitalist culture ruse of male superiority. Capitalist culture is based and dependent on separations like competition, total individualism, exploitation through racism and sexism. Through sexism capitalism is able to effectively separate the roles of women and men and keep half the population doing incredible amounts of work that is completely taken for granted and frees husbands to work for the rulers, who are almost entirely white males.

Capitalism controls us with its use of images. We are brought up on images that other people make up and have been developing for many, many years, rather than on knowledge of the natural order of the universe we live in. One of the heaviest images put on us, so heavy that we aren't even aware of it most of the time, is the image we have of ourselves as women and men. The roles are totally separated, as if we had no commonness between us except that we are human beings! (and I know some people would question even that. ) What a farce! For each one of us to be able to develop to our fullest potential we have to be able to under stand our differences as individuals and not as men and women. I know some people with cocks and flat breasts that are more warm and open and receptive and gentle as people than a lot of women I know. At the same time I know a lot of people with cunts and tits who are more outgoing and strong and capable of a lot more than a lot of men I know. We have to learn how to break through those images we have of each other and base our relationships and knowledge on objective facts. "Image is Junk" as William Burroughs puts it. So when we hear astrological signs described as male or female, positive or negative, we don't immediately think one is better or superior to the other; understand they are different, that we as people all have both in us and it is not dependent on our biological functions.

This is not so apparent or easy to see around us because capitalist culture has effectively developed their control images for many years and it's no light thing to break down. LSD and marijuana and other psychedelic drugs are proving to be very effective in breaking down old thought patterns and opening us to the natural order of things again, (which can be pretty scary at first since we don't understand it) but this constitutes a definite threat to the existing power structure on the planet. Their response can be seen from the availability of control drugs such as heroin and the so-called THC on the streets nowadays, all of which serve to keep the people down.