Truck On Down And... Register! 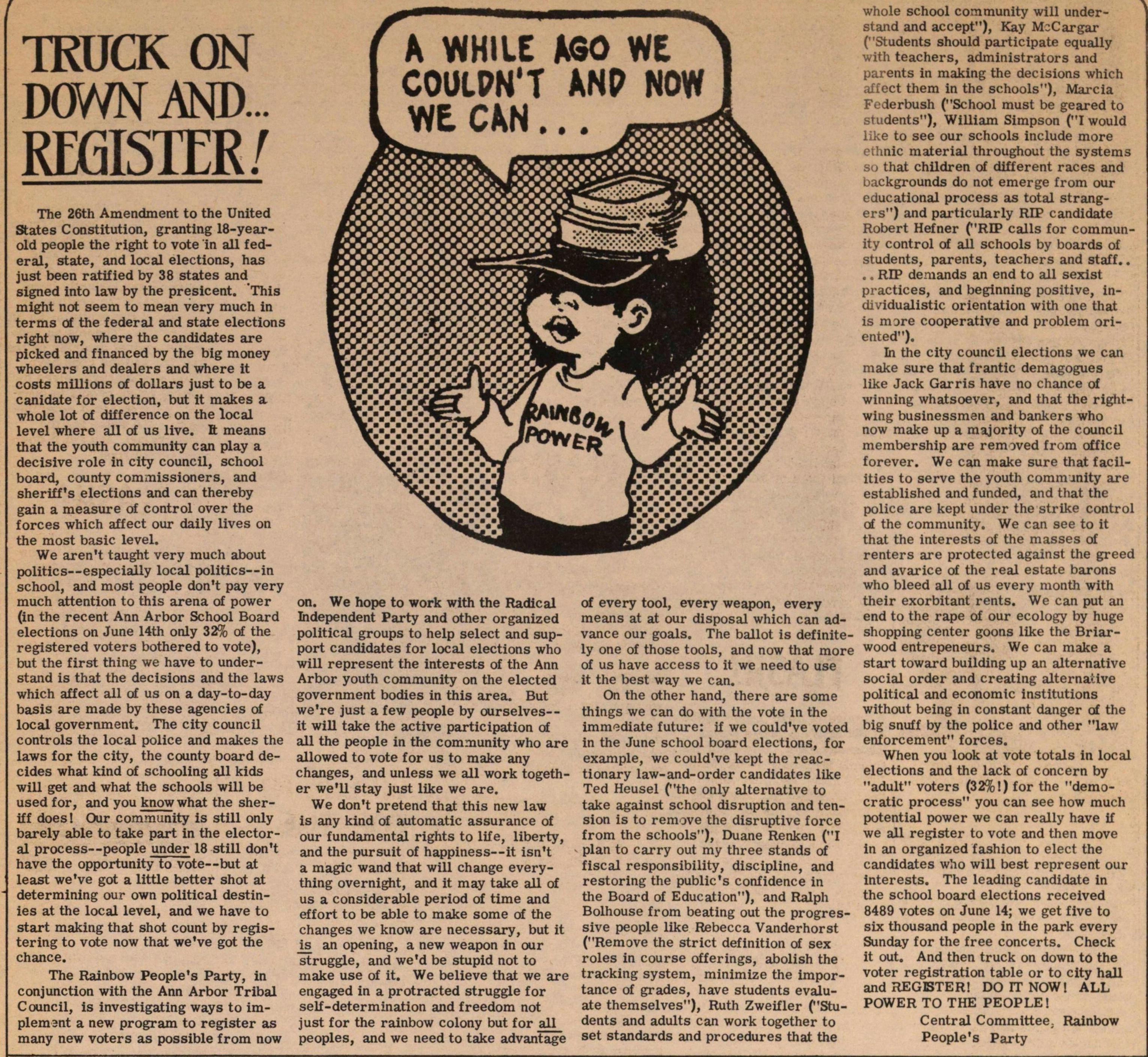 The 26th Amendment to the United States Constitution, granting 18-year old people the right to vote in all federal, state, and local elections, has just been ratified by 38 states and signed into law by the presicent. This might not seem to mean very much in terms of the federal and state elections right now, where the candidates are picked and financed by the big money wheelers and dealers and where it costs millions of dollars just to be a candidate for election, but it makes a whole lot of difference on the local level where all of us live. It means that the youth community can play a decisive role in city council, school board, county commissioners, and sheriff's elections and can thereby gain a measure of control over the forces which affect our daily lives on the most basic level.

We aren't taught very much about politics- especially local politics - in school, and most people don't pay very much attention to this arena of power (in the recent Ann Arbor School Board elections on June 14th only 32% of the registered voters bothered to vote), but the first thing we have to understand is that the decisions and the laws which affect all of us on a day-to-day basis are made by these agencies of local government. The city council controls the local police and makes the laws for the city, the county board decides what kind of schooling all kids will get and what the schools will be used for, and you know what the sheriff does! Our community is still only barely able to take part in the electoral process - people under 18 still don't have the opportunity to vote - but at least we've got a little better shot at determining our own political destinies at the local level, and we have to start making that shot count by registering to vote now that we've got the chance.

The Rainbow People's Party, in conjunction with the Ann Arbor Tribal Council, is investigating ways to implement a new program to register as many new voters as possible from now on. We hope to work with the Radical Independent Party and other organized political groups to help select and support candidates for local elections who will represent the interests of the Ann Arbor youth community on the elected government bodies in this area. But we're just a few people by ourselves-it will take the active participation of all the people in the community who are allowed to vote for us to make any changes, and unless we all work together we'll stay just like we are.

We don't pretend that this new law is any kind of automatic assurance of our fundamental rights to life, liberty, and the pursuit of happiness - it isn't a magic wand that will change everything overnight, and it may take all of us a considerable period of time and effort to be able to make some of the changes we know are necessary, but it is an opening, a new weapon in our struggle, and we'd be stupid not to make use of it. We believe that we are engaged in a protracted struggle for self-determination and freedom not just for the rainbow colony but for all peoples, and we need to take advantage of every tool, every weapon, every means at our disposal which can advance our goals. The ballot is definitely one of those tools, and now that more of us have access to it we need to use it the best way we can.

On the other hand, there are some things we can do with the vote in the immediate future: if we could've voted in the June school board elections, for example, we could've kept the reactionary law-and-order candidates like Ted Heusel ("the only alternative to take against school disruption and tension is to remove the disruptive force from the schools"), Duane Renken ("I plan to carry out my three stands of fiscal responsibility, discipline, and restoring the public 's confidence in the Board of Education"), and Ralph Bolhouse from beating out the progressive people like Rebecca Vanderhorst ("Remove the strict definition of sex roles in course offerings, abolish the tracking system, minimize the importance of grades, have students evalúate themselves"), Ruth Zweifler ("Students and adults can work together to set standards and procedures that the whole school community will understand and accept"), Kay McCargar ("Students should particípate equally with teachers, administrators and parents in making the decisions which affect them in the schools"), Marcia Federbush ("School must be geared to students"), William Simpson ("I would like to see our schools include more ethnic material throughout the systems so that children of different races and backgrounds do not emerge from our educational process as total strangers") and particularly RIP candidate Robert Hefner (RIP calis for community control of all schools by boards of students, parents, teachers and staff . . . . RIP demands an end to all sexist practices, and beginning positive, individualistic orientation with one that is more cooperative and problem oriented").

In the city council elections, we can make sure that frantic demagogues like Jack Garris have no chance of winning whatsoever, and that the rightwing businessmen and bankers who now make up a majority of the council membership are removed from office forever. We can make sure that facilities to serve the youth community are established and funded, and that the police are kept under the strike control of the community. We can see to it that the interests of the masses of renters are protected against the greed and avarice of the real estate barons who bleed all of us every month with their exorbitant rents. We can put an end to the rape of our ecology by huge shopping center goons like the Briarwood entrepreneurs. We can make a start toward building up an alternative social order and creating alternative political and economic institutions without being in constant danger of the big snuff by the pólice and other "law enforcement" forces. When you look at vote totals in local elections and the lack of concern by "adult" voters (32%!) for the "democratic process" you can see how much potential power we can really have if we all register to vote and then move in an organized fashion to elect the candidates who will best represent our interests. The leading candidate in the school board elections received 8489 votes on June 14; we get five to six thousand people in the park every Sunday for the free concerts. Check it out. And then truck on down to the voter registration table or to city hall and REGISTER! DO IT NOW! ALL POWER TO THE PEOPLE! Central Committee. Rainbow People's Party