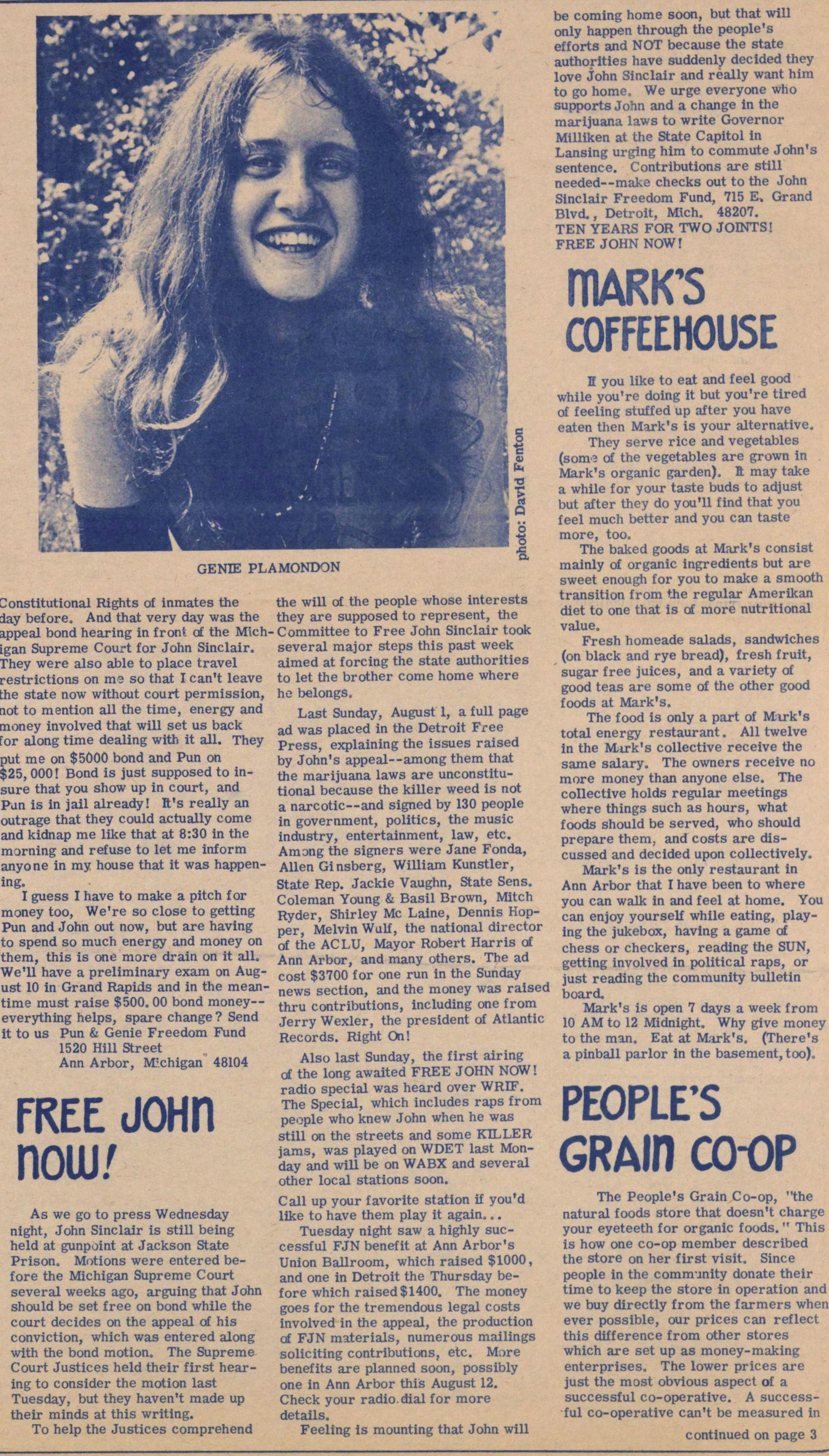 As we go to press Wednesday night, John Sinclair is still being held at gunpoint at Jackson State Prison. Motions were entered before the Michigan Supreme Court several weeks ago, arguing that John should be set free on bond while the court decides on the appeal of his conviction, which was entered along with the bond motion. The Supreme Court Justices held their first hearing to consider the motion last Tuesday, but they haven't made up their minds at this writing. To help the Justices comprehend the will of the people whose interests they are supposed to represent, the Committee to Free John Sinclair took several major steps this past week aimed at forcing the state authorities to let the brother come home where hc belongs. Last Sunday, August 1, a full page ad was placed in the Detroit Free Press, explaining the issues raised by John's appeal--among them that the marijuana laws are unconstitutional because the killer weed is not a narcotic - and signed by 130 people in government, politics, the music industry, entertainment, law, etc. Among the signers were Jane Fonda, Allen Ginsberg, William Kunstier, State Rep. Jackie Vaughn, State Sens. Coleman Young & Basil Brown, Mitch Ryder, Shirley Mc Laine, Dennis Hopper, Meivin Wulf, the national director oí the AC LU, Mayor Robert Har ris of Ann Arbor, and many others. The ad cost $3700 for one run in the Sunday news section, and the money was raised thru contributions, including one from Jerry Wexler, the president of Atlantic Records. Right On! Also last Sunday, the first airing of the long awaited FREE JOHN NOW! radio special was heard over WRIF. The Special, which includes raps from people who knew John when he was still on the streets and some KILLER jams, was played on WDET last Monday and will be on WABX and several other local stations soon. Cali up your favorite station if you'd like to have them play it again. . . Tuesday night saw a highly successful FJN benefit at Ann Arbor 's Union Ballroom, which raised $1000, and one in Detroit the Thursday before which raised $1400. The money goes for the tremendous legal costs involved in the appeal, the production cf FJN materials, numerous mailings soliciting contributions, etc. More benefits are planned soon, possibly one in Ann Arbor this August 12. Check your radio, dial for more details. Feeling is mounting that John will be coming home soon, but that will only happen through the people's efforts and NOT because the state authorities have suddenly declded they love John Sinclair and rèally want him to go home. We urge everyone who supports John and a change in the marijuana laws to write Governor Mtlliken at the State Capítol in Lansing urging him to commute John's sentence. Contributions are still needed - make checks out to the John Sinclair Freedom Fund, 715 E, Grand Blvd., Detroit, Mich. 48207. TEN YEARS FOR TWO JOINTS! FREE JOHNNOWI