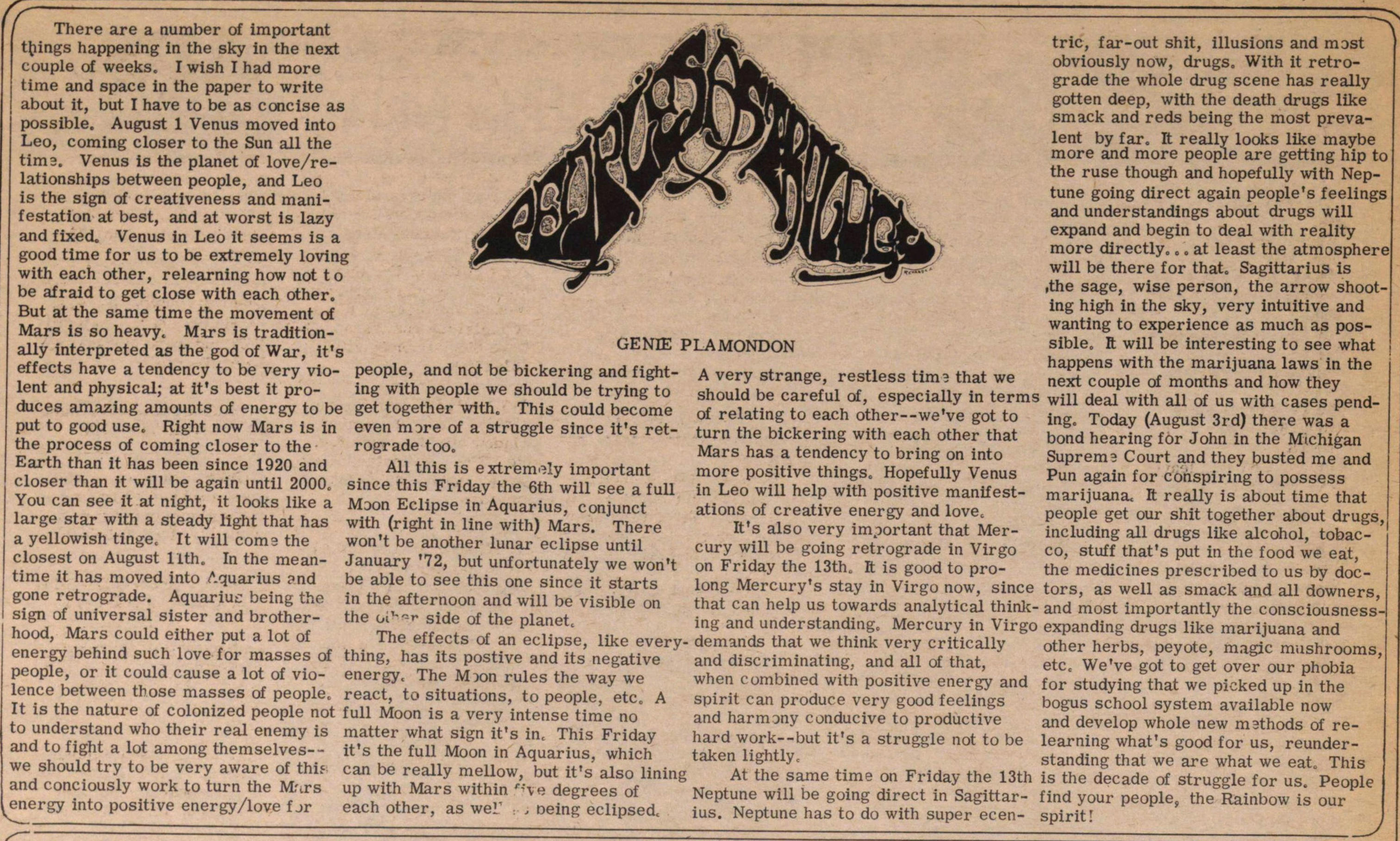 There are a number of important things happening in the sky in the next couple of weeks. I wish I had more time and space in the paper to write about it, but I have to be as concise as possible. August 1 Venus moved into Leo, coming closer to the Sun all the time. Venus is the planet of love/relationships between people, and Leo is the sign of creativeness and manifestation at best, and at worst is lazy and fixed. Venus in Leo it seems is a good time for us to be extremely loving with each other, relearning how not to be afraid to get close with each other. But at the same time the movement of Mars is so heavy. Mars is traditionally interpreted as the god of War, it's effects have a tendency to be very violent and physical; at it's best it produces amazing amounts of energy to be put to good use. Right now Mars is in the process of coming closer to the Earth than it has been since 1920 and closer than it will be again until 2000.  You can see it at night, it looks like a large star with a steady light that has a yellowish tinge, It will come the closest on August 11th. In the meantime it has moved into Aquarius and gone retrograde.  Aquarius being the sign of universal sister and brotherhood, Mars could either put a lot of energy behind such love for masses of people, or it could cause a lot of violence between those masses of people.

It is the nature of colonized people not to understand who their real enemy is and to fight a lot among themselves--we should try to be very aware of this and consciously work to turn the Mars energy into positive energy/love for people, and not be bickering and fighting with people we should be trying to get together with. This could become even more of a struggle since it's retrograde too.

All this is extremely important since this Friday the 6th will see a full Moon Eclipse in Aquarius, conjunct with (right in line with) Mars. There won't be another lunar eclipse until January '72, but unfortunately we won't be able to see this one since it starts in the afternoon and will be visible on the other side of the planet.

The effects of an eclipse, like everything, has its positive and its negative energy. The Moon rules the way we react, to situations, to people, etc. A full Moon is a very intense time no matter what sign it's in. This Friday it's the full Moon in Aquarius, which can be really mellow, but it's also lining up with Mars within five degrees of each other, as well as being eclipsed. A very strange, restless time that we should be careful of, especially in terms of relating to each other -- we've got to turn the bickering with each other that Mars has a tendency to bring on into more positive things. Hopefully Venus in Leo will help with positive manifestations of creative energy and love.

It's also very important that Mercury will be going retrograde in Virgo on Friday the 13th. It is good to prolong Mercury's stay in Virgo now, since that can help us towards analytical thinking and understanding. Mercury in Virgo demands that we think very critically and discriminating, and all of that, when combined with positive energy and spirit can produce very good feelings and harmony conducive to productive hard work--but it's a struggle not to be taken lightly.

At the same time on Friday the 13th Neptune will be going direct in Sagittarius. Neptune has to do with super eccentric, far-out shit, illusions and most obviously now, drugs. With it retrograde the whole drug scene has really gotten deep, with the death drugs like smack and reds being the most prevalent by far. It really looks like maybe more and more people are getting hip to the ruse though and hopefully with Neptune going direct again people's feelings and understandings about drugs will expand and begin to deal with reality more directly... at least the atmosphere will be there for that. Sagittarius is the sage, wise person, the arrow shooting high in the sky, very intuitive and wanting to experience as much as possible. It will be interesting to see what happens with the marijuana laws in the next couple of months and how they will deal with all of us with cases pending. Today (August 3rd) there was a bond hearing for John in the Michigan Supreme Court and they busted me and Pun again for conspiring to possess marijuana, It really is about time that people get our shit together about drugs, including all drugs like alcohol, tobacco, stuff that's put in the food we eat, the medicines prescribed to us by doctors, as well as smack and all downers, and most importantly the consciousness-expanding drugs like marijuana and other herbs, peyote, magic mushrooms, etc, We've got to get over our phobia for studying that we picked up in the bogus school system available now and develop whole new methods of relearning what's good for us, re-understanding that we are what we eat. This is the decade of struggle for us. People find your people, the Rainbow is our spirit!